Developer: Big Fat Alien
Publisher: See Above
Released on May 6, 2011

BEEP is a mix of creative puzzle platforming and gravity gun action, packaged into an Indie game. Propel your rocket across the galaxy and deploy your adorable BEEP bots onto new planets in search of valuable anti-matter. Solve puzzles by stacking up blocks and take down the hostile enemies that lurk in every corner.

About The Game BEEP

BEEP is a somewhat unusual take on platformers with its use of gameplay mechanics that involve rotating physics-defying beams and grappling objects that shouldn’t be floating in the first place. It was developed by people who formerly worked for LucasArts and Bioware, two giant franchises for releasing cinematic games. 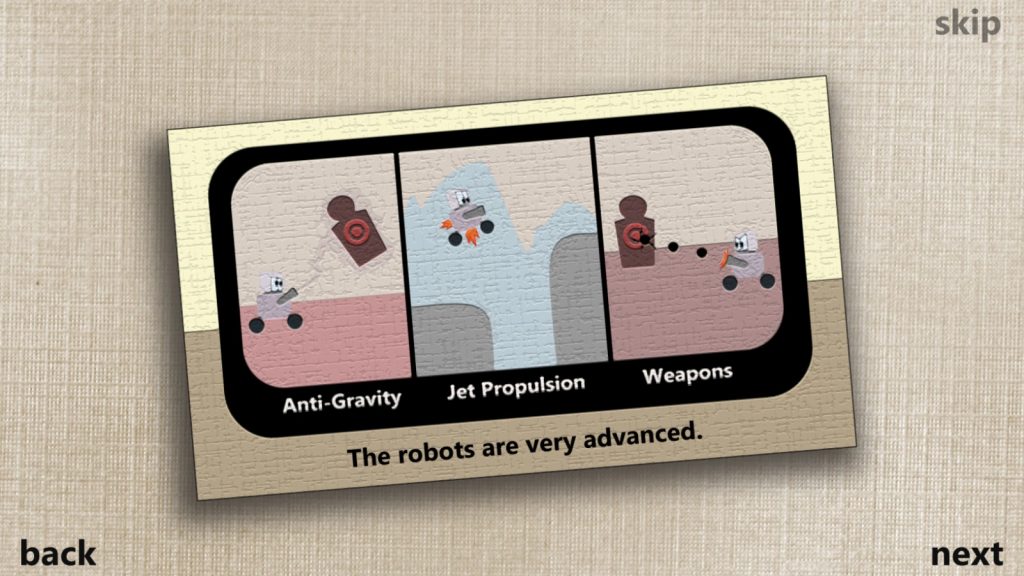 You control BEEP, a cute little robot who looks just like WALL-E from the Pixar movie. In the year 2110, a fleet of BEEP bots is sent by Earth to travel the galaxy. Every robot is specially equipped with jetpack propulsions, anti-gravity beams, and pellet shooters. They share a hive mind probably to help them stay focused on the mission.

The BEEPS are mass-produced on an assembly line inside the ship, to make them easier to replace if they get destroyed while mining for precious resources. One of the BEEP ships eventually ends up in an unknown solar system. This pretty much sums up the whole story. 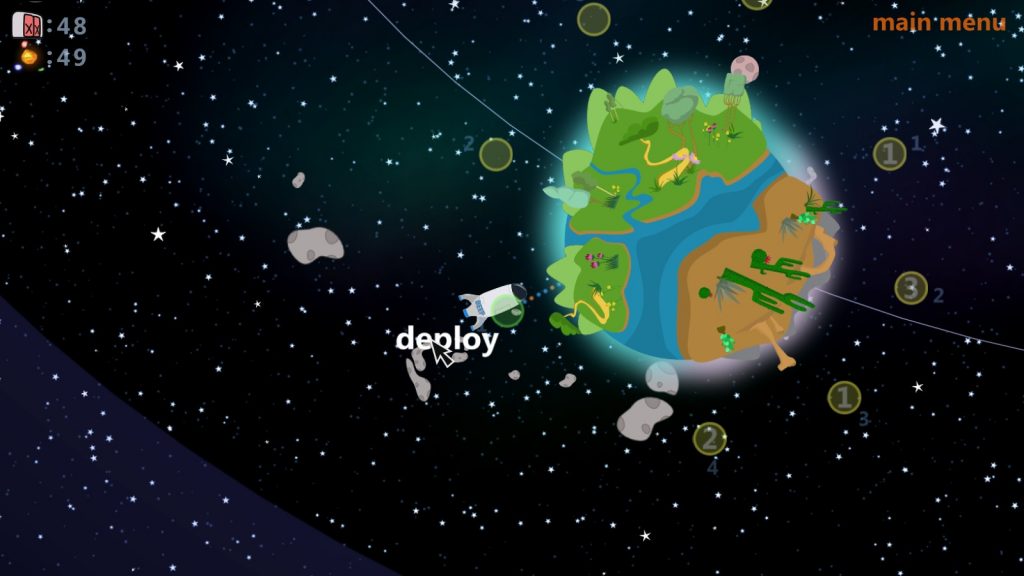 The first thing you’ll notice is the map of this solar system. It took me a minute to figure out how to pilot the rocket ship. (Click & drag with the mouse.) You may run into some asteroids before you bump into one of three planets in this game. Your ship can only dock on the outer planet that isn’t locked.

BEEP has six different landscapes to explore. To start a level, you must drop off BEEP on one of the yellow circles. As a platformer, the basic controls to move and jump are a given. But the BEEP bot isn’t complete without its directional jetpack, ANTI-GRAV beam and its ability to fire/reload an infinite supply of bullets. 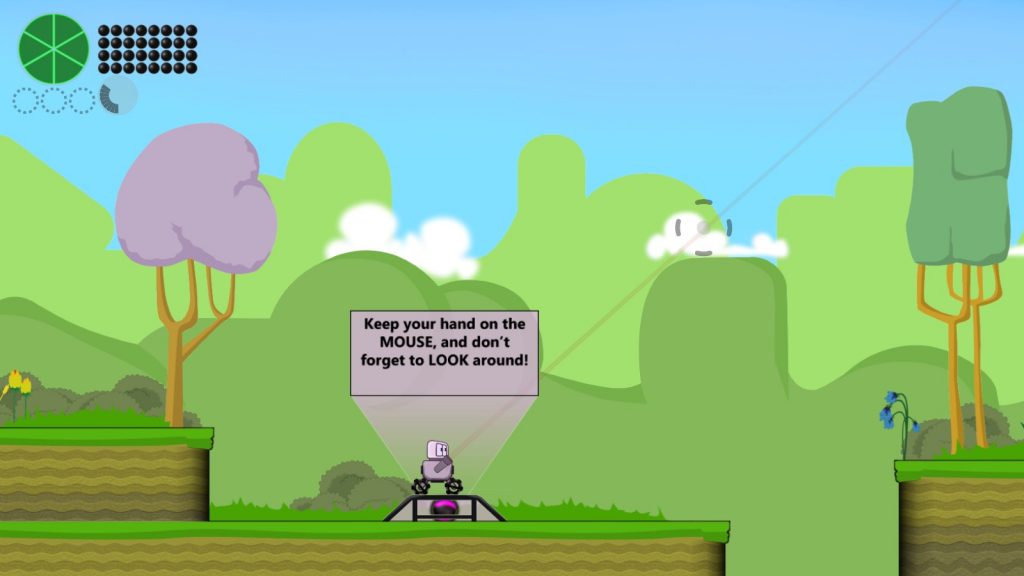 The BEEP bot is able to jump quite high despite its slow movement over most terrain. It’d be nice if BEEP could dash to jump further. The tutorials are displayed on purple holo board projectors. They do at times, share a bit of amusing commentary on BEEP’s thoughts like when it states that BEEP felt a surge in his CPU akin to fear when making a “leap of faith”. 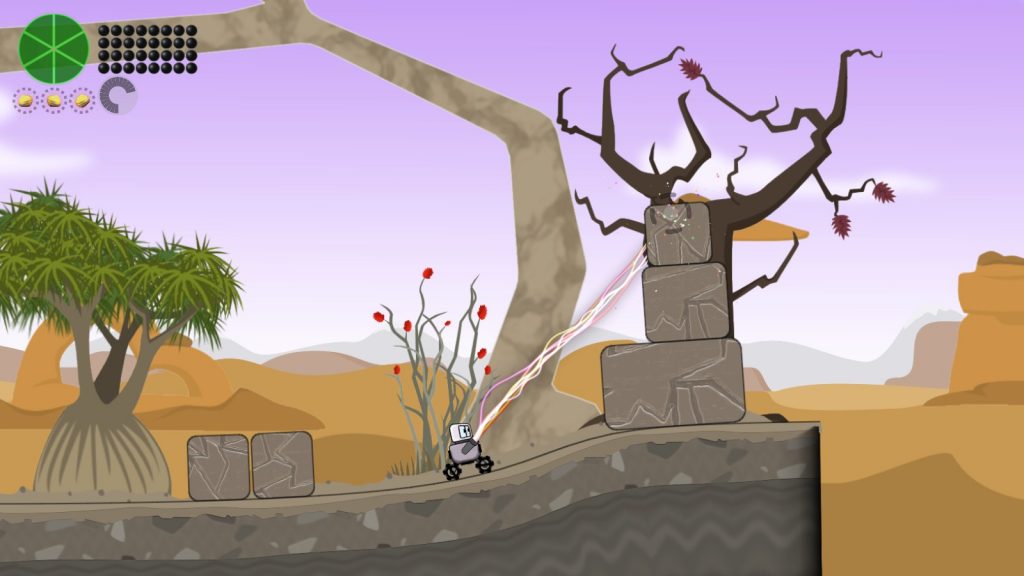 The mouse serves as a crosshair for targeting purposes. It lets you extend the camera to look around for potential pitfalls. Some objects can be picked up and thrown at hostile robots thanks to your trusty ANTI-GRAV beam. Not all pieces of anti-matter are within reach. In the level below, BEEP has to use his beam to pull the big orange rock towards him instead of jumping down to his death.

While the game is bright and colorful, getting to the end of a level is certainly no walk in the park. You can’t ever let your guard down, even when there is a puzzle segment. The stepping stones are often guarded by hostile mobs. The most common ones are called Kreeps which are one-wheeled robots that shoot a line of 5-6 projectiles. 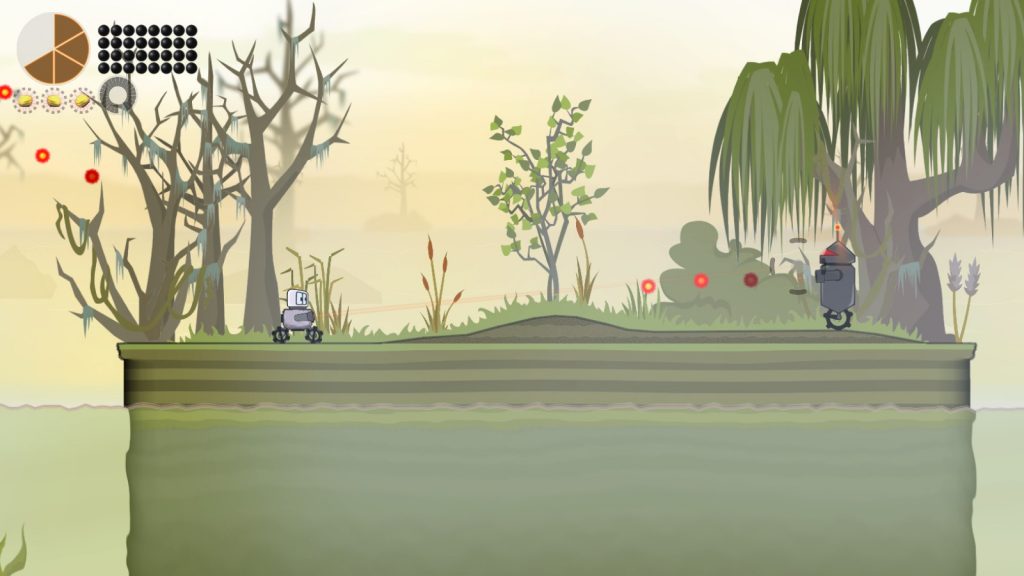 When exploring the area, it’s important to keep an eye on BEEP’s health, monitored by the pie chart in the top left corner. Don’t run out of slices or else BEEP will lose a life. But don’t worry, he has an unlimited number of lives produced by cloning technology. BEEPs are a bit fragile since they break down after six hits.

In the grassland levels, the only enemies are Kreeps and glassy fish bots that do touch damage. In later stages, stronger robots will attack you upon sight: A battery-powered bulldozer can knock Beep back with a spiked ball. A submarine robot may fire spiky pellets from underwater. The annoying floating, spider bots that explode upon contact does the most damage.

What Else To Note About BEEP

In the canyons, you will have to pick your battles wisely. BEEP’s pellets are unable to pierce metal. So you have no choice but to duck under the flamethrower of a dome-shaped metal bot. The same goes for moving laser beams and turret shooters. You may need to block them off with piles of rocks. 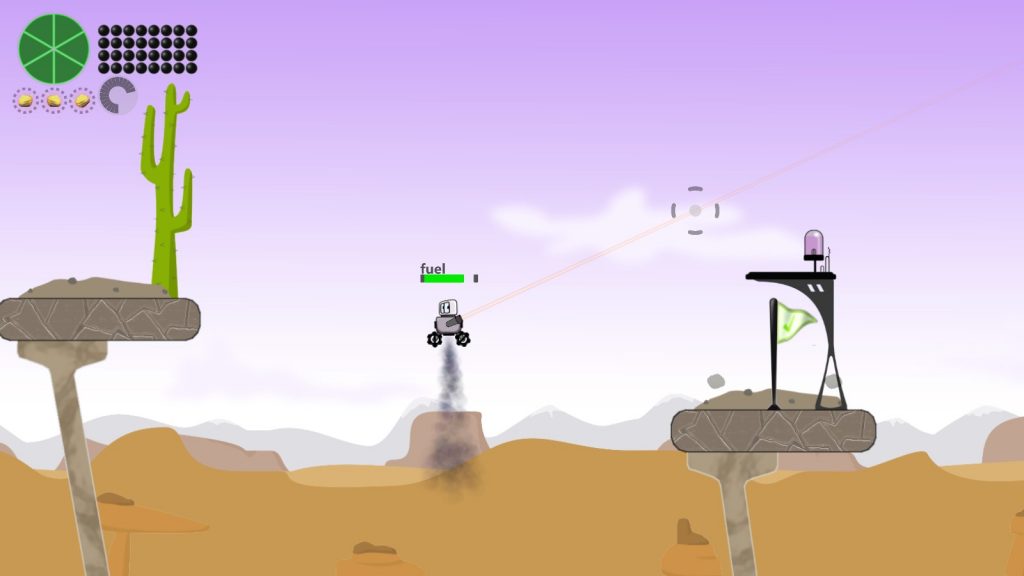 New elements of gameplay are introduced in each area to keep you from getting bored. For instance, in the canyons, BEEP will come across fueling stations to fill up on rocket fuel. To land on higher platforms, BEEP must fly up before his jetpack runs out of fuel. The flag is a checkpoint to reload another BEEP in case he dies. It is also the only place to restore all your health. 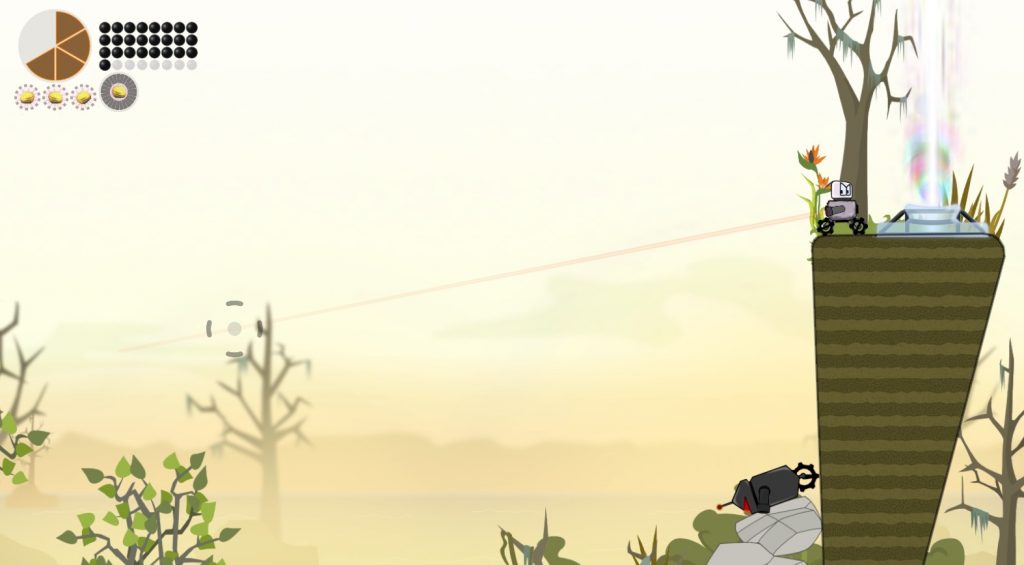 Your main objective is to help escort BEEP to the light beam at the end of each level. This beam will send him back onto the BEEP ship. In the swamp area, the beam might be placed above on a ledge. You could either pile on the remains of dead robots or pick up a giant log to reach it. Your progress is auto-saved so you never have to collect the same nuggets a second time.

BEEP has a total of 24 levels, that get increasingly difficult, where each level contains anti-matter nuggets, which you had to collect to unlock more levels to play. There are also smaller nuggets scattered about in hard-to-reach places. If you collect all the gold nuggets in a level, then you will get a bonus piece of anti-matter. 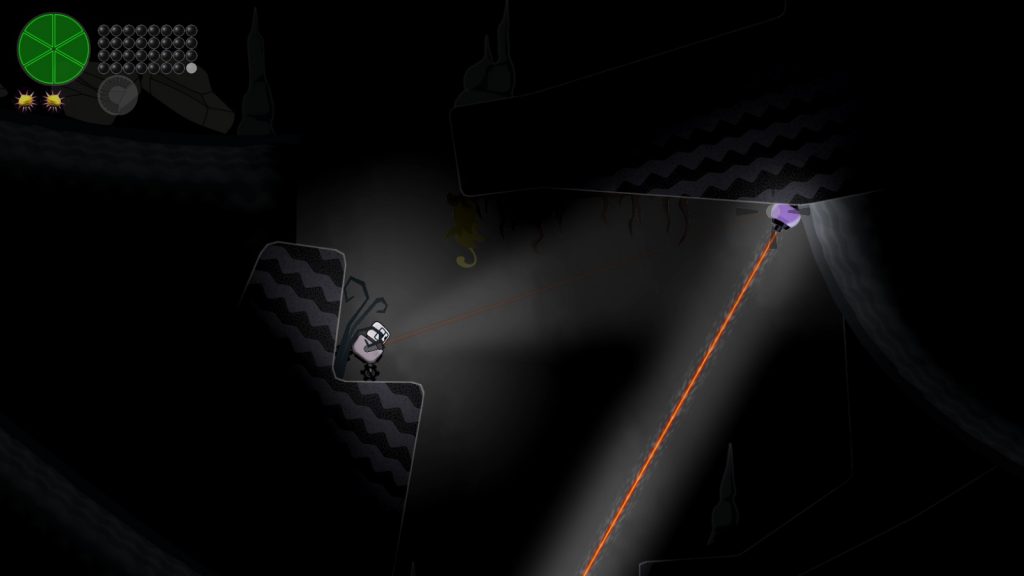 Not all obstacles can be destroyed just by shooting at them. It’s all a matter of timing and knowing when to jump over the spiked pistons or dodge an incoming amoeba cell with pointy edges. Some areas are blocked off, forcing you to find another way. Use BEEP’s flashlight to navigate underground. Those places are loaded with traps like this laser you have to disable by shooting at it.

The dark tunnels are a goldmine for anti-matter nuggets. There are still puzzles to solve and surprise attacks by the Kreeps, but BEEP should survive if you look before you leap. Just try not to get zapped by the lasers. These sections are a nice touch while slightly out of place compared to the rest of the levels. 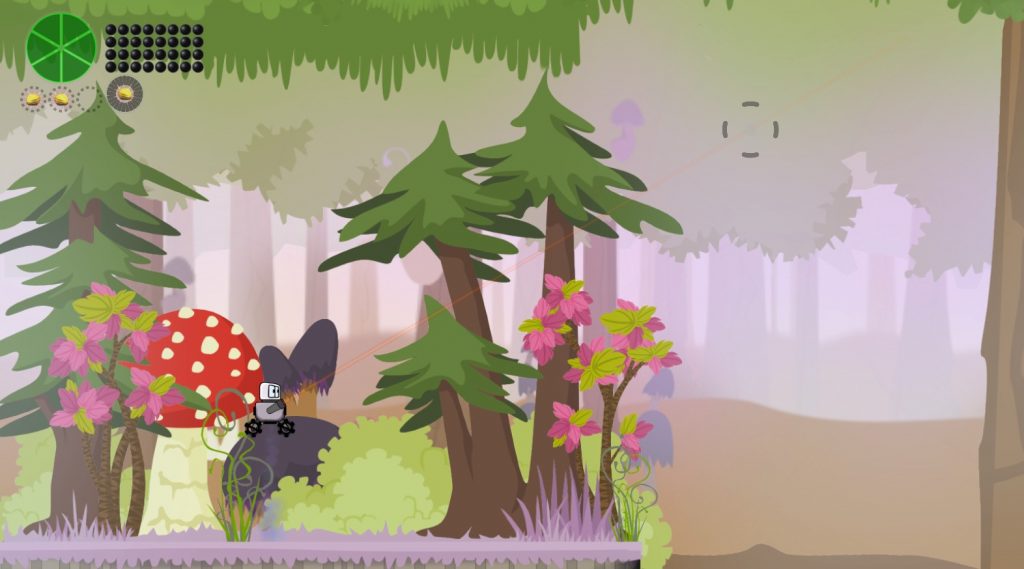 Conversely, I noticed several bugs while playing the game. It seems the explosives create black squares whenever they off on-screen. Similarly, I wasn’t too fond of the ANTI-GRAV’s limitations, to be specific, the inability to target objects out of BEEP’s line of sight. It made rotating objects rather frustrating.

Before I end this review, I’d like to point out the creative aspects of BEEP, especially when it incorporates new gameplay elements into the puzzles such as underwater mazes. The painted backgrounds in the forest levels do bring out the visual appeal. My favorite puzzle had to be the one where BEEP uses his anti-gravity beam to push a ball, creating a domino effect.

Overall, I would say BEEP is a solid game. It keeps players on their toes using quirky puzzle designs based on the workings of simple machines. The robots do throw a wrench into things because they are likely invaders from another world, here to terrorize the locals.