The Most Popular Genres In Gaming 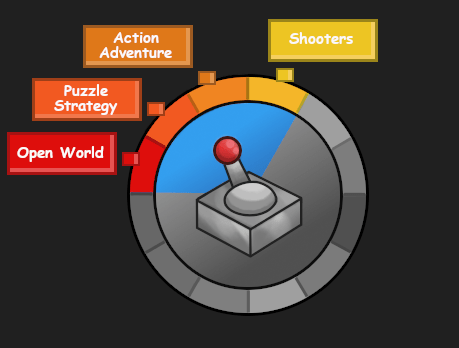 First-person video games immerse the player in a 3-D interface where they are seeing the environment around them, the same as in real life. The player’s visible field is going to be that of the playable character’s perspective.

You might not even know who or what you are actually controlling because you get few opportunities to look at your character. Your avatar could be a human, a cyborg, a dog, or an alien invader for all I know. But you’ll always be able to see your equipped weapon on hand along with the objectives of the game.

If you were to actually alter the game files and try to shift the camera view towards your character, it will yield unexpected results. (i.e. Being unable to move your crosshairs, picking up objects from thin air and other unlikely situations.)

First-person games tend to have a silent protagonist who is exploring the hostile world while aiming & firing at every moving creature in sight. These games are all a matter of testing your reflexes ranging from 1st Person Shooters (FPS) to virtual simulations.

Third-person games are somewhat more varied in gameplay ranging from story-mode adventures to leveling RPGs. It has several sub-genres that include mini-games, multiplayer games, real-time strategies, racing, and most fighting games.

The main difference between a 3rd person and a 1st person video game is that your playable avatar is visible on-screen so you get to stare at their backside for 50 hours straight. These games often utilize 3-D platforming along with a typical “hack and slash” battle sequence.

It is considerably easier to interact with graphical features since you are able to estimate your character’s relative distance from visible objects and enemies.

Many third-person games attempt to draw you in with their entertaining story-telling, character development, hilarious cut-scenes, in order to craft a cinematic experience you won’t forget.

Your avatar is often given the freedom of choice to alter their destiny, based on gameplay mechanics and a branching but linear plot which leads to interesting outcomes.

Action & Adventure video games are the most inclusive, engaging gamers through unpredictable encounters, intensely timed events, epic boss battles, challenging quests, and the occasional puzzle to solve. It is really not for the faint of heart.

Be prepared for hours of fun and addictive gameplay, when you pretend to be a heroic protagonist who starts off small but quickly becomes an over-powered force to vanquish all evil. (Except when you are actually playing as a villain.) The best part is being able to determine how the story will end.

Action games generally provide a leveling system, skill trees, or weapon upgrades as you go. While you traverse the overworld, you will find a bunch of cool items and power-ups that are crucial in progressing through difficult parts of the game.

The inventory is also where you get to store priceless trinkets you have no use for. It is my personal favorite genre because of the freedom to mess with the poor NPCs as you please since there are no real consequences.

Puzzle and Strategy games are truly designed to test the intelligence of gamers everywhere using intellectually stimulating problems. The classics were Sudoku, Chess, and Tetris on PC.

It happens to be a popular genre among die-hard nerds, given the opportunity to do brain exercises through mind-bending challenges.

Puzzle games require a healthy dose of both logical reasoning and calculated intuition. Don’t come here for a compelling narrative!

Puzzle/Strategy video games are all about using the right tactics to tackle conceptual challenges: You must push these boxes/press levers in order to reach your goal.

You have to recognize patterns, colors, or shapes and solve them before time runs out. Patience is the key to win. A sub-genre includes all educational games that teach children rudimentary subjects which are also the age-appropriate section.