FEZ at a first glance appears to be a typical 2D platformer game but you’ll soon realize that there is more than meets the eye in this world which tests the limits of space and time. You are Gomez, a humanoid who is sent on a journey, to explore the 3D world which is hidden by one’s perception of what’s in front of them.

My First Impression of FEZ

I first knew about this game from Paul but since he wasn’t into platformers, I decided to give it a try. The idea of a rotating world did sound interesting at the time. FEZ managed to invent new puzzles using the 3D world while still retaining the motion of a 2D character so that you could jump onto ledges like in Super Mario Bros.

You control the humanoid character Gomez, who leaves home to walk around the village. Everyone will claim that cubes don’t exist, though there is some speculation about the existence of a Devil Cube. To get the player familiar with the controls, the game explains how to move, jump, talk, and look around. 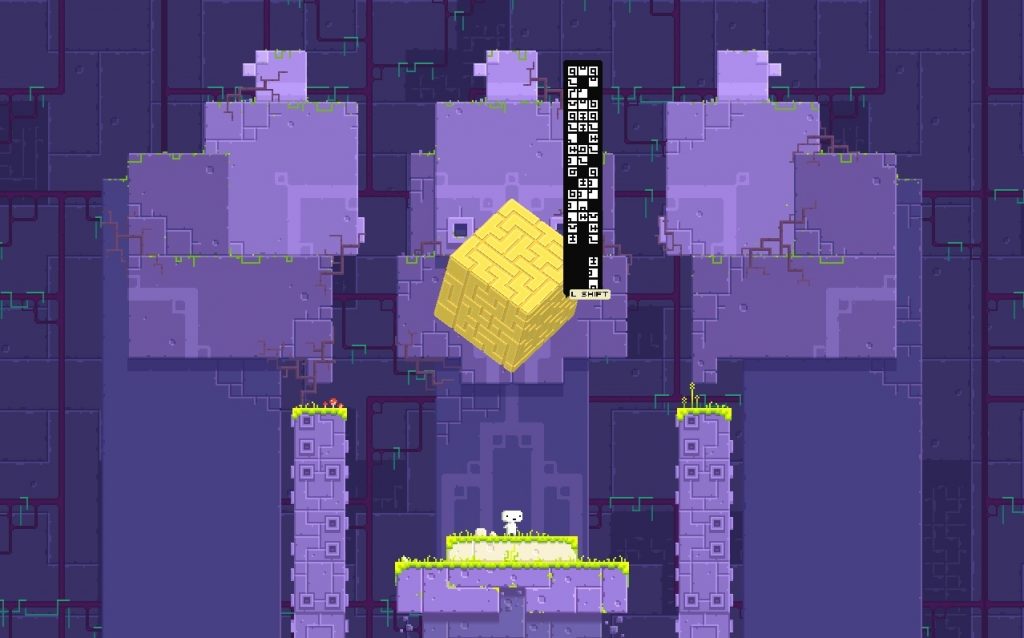 But that’s not all! Once you understand the basics, you are forcibly transported to another world where you meet a cube that speaks a creepy language. It reveals the other facets of the overworld and suddenly explodes. This seems to crash your game temporarily because apparently, the developer likes to troll.

Changing Your POV in FEZ

FEZ is all about your spatial perception of obstacles that surround your character. To navigate the world itself requires rotating the whole stage like the sides of a cube. You never know what you might find on another side, whether it be the cube fragments, keys to unlock doors, or the occasional treasure map.

The environment changes based on an overall theme, including day and night cycles. You will find different biomes each with their own soundtrack, weather changes, colorful skies, the beauty of nature, ancient runes, waterfalls, and feel like you are actually exploring the floating islands. The world is a cube as we know it. 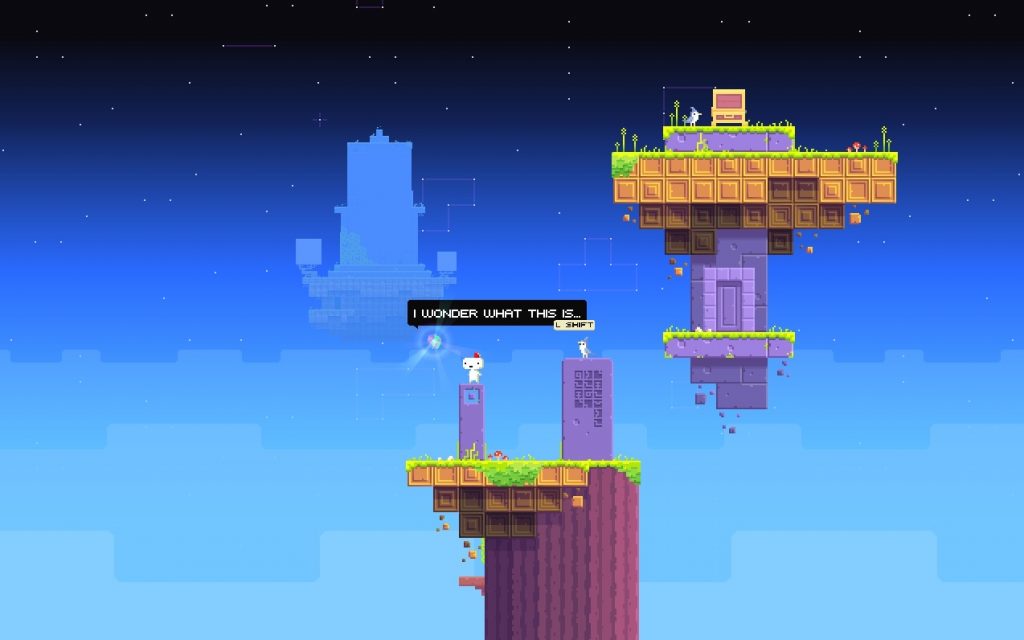 There are many obstacles that involve climbing vines, solving cryptic puzzles in dungeons, unlocking doors to find new nodes (which I’ll get to later), and turning entire segments of a level around to bridge a gap too far to jump over. FEZ does throw you a curve ball with its creative puzzles as you unlock more levels.

The main point of playing FEZ is to collect as many cube pieces as possible. They are often scattered about, such as on top of buildings or hidden behind some hole in the wall. You would need eight pieces to form a whole golden cube, though sometimes you’ll find a whole cube after solving a particularly difficult puzzle. 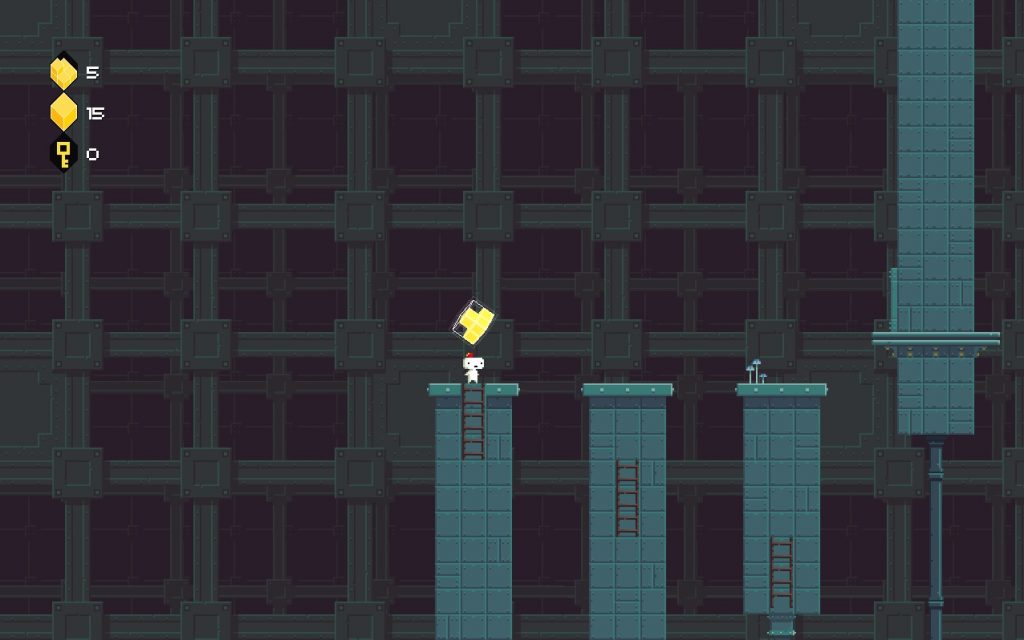 You control Gomez, who is on an adventure to relive the history of his people with Dot, the rainbow cube by his side. There is an endless world beyond the village worth exploring; many secrets, hidden rooms, and treasures await you! The best way to describe it is to imagine a world that rotates on its axis, revealing new perspectives.

To see how many cubes you’ve collected, simply check your inventory. It’s literally another cube, but the sides display the number of cubes and anti-cubes you currently have. Treasure maps and artifacts can be examined here as well though they don’t do much besides hinting at treasure chests. 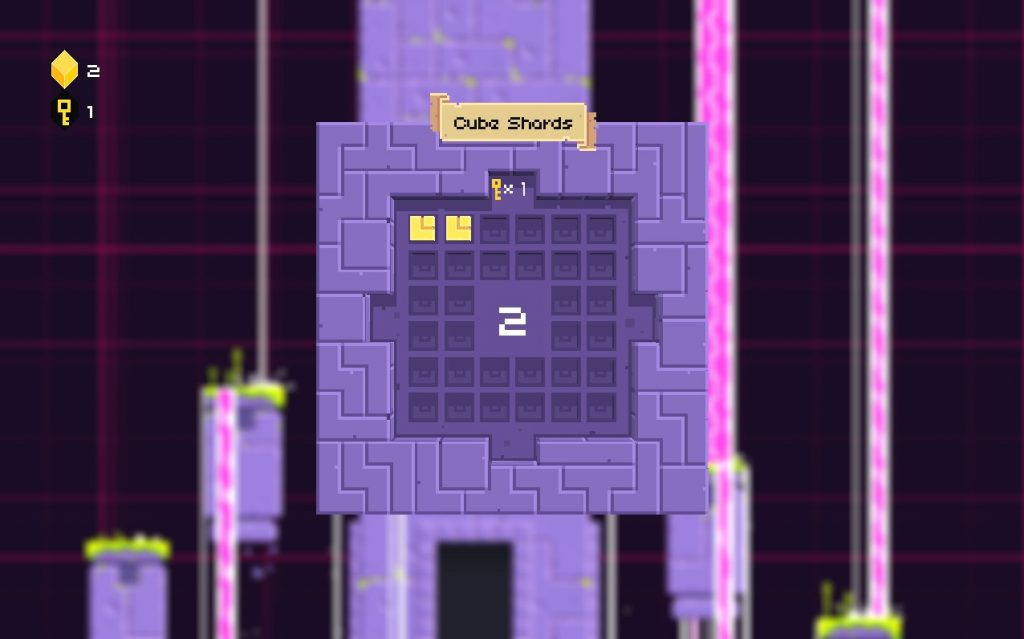 Treasure chests have the same tune as when you open one in any Legend of Zelda game. They tend to hold keys and treasure maps for future reference. These are optional collectibles, unlike cubes which are required for opening gates to further progress (it’s not really a story-driven game though FEZ implies the existence of aliens). 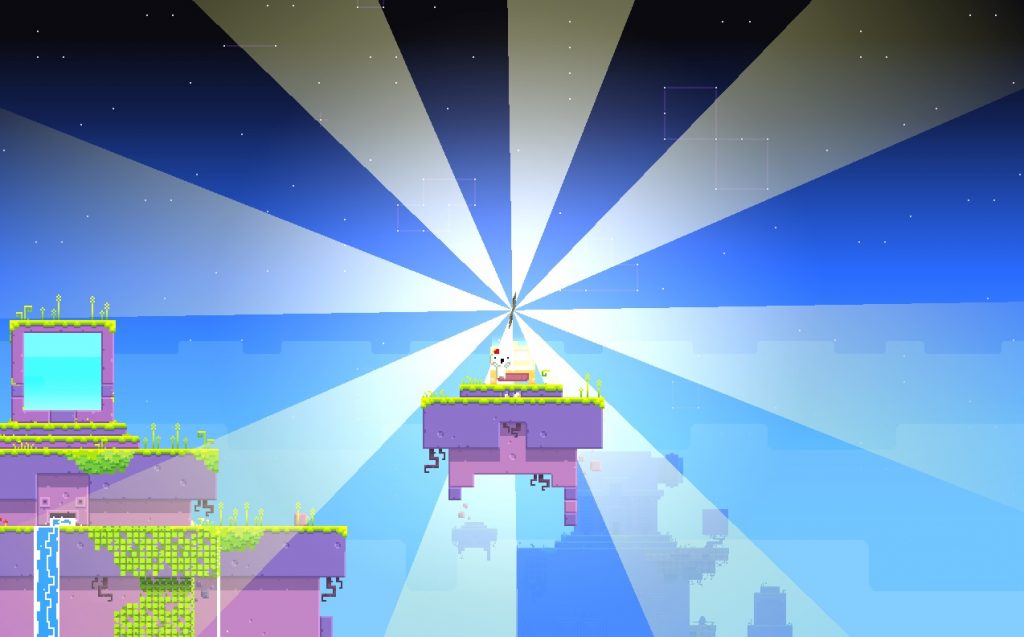 You might end up on a spinning platform that changes where you’re facing so you’d need to figure out when to jump and which direction to move towards. It really defies the laws of physics when you realize how rotating 90 degrees can close the distance between two faraway walls to help you climb to a higher floor. 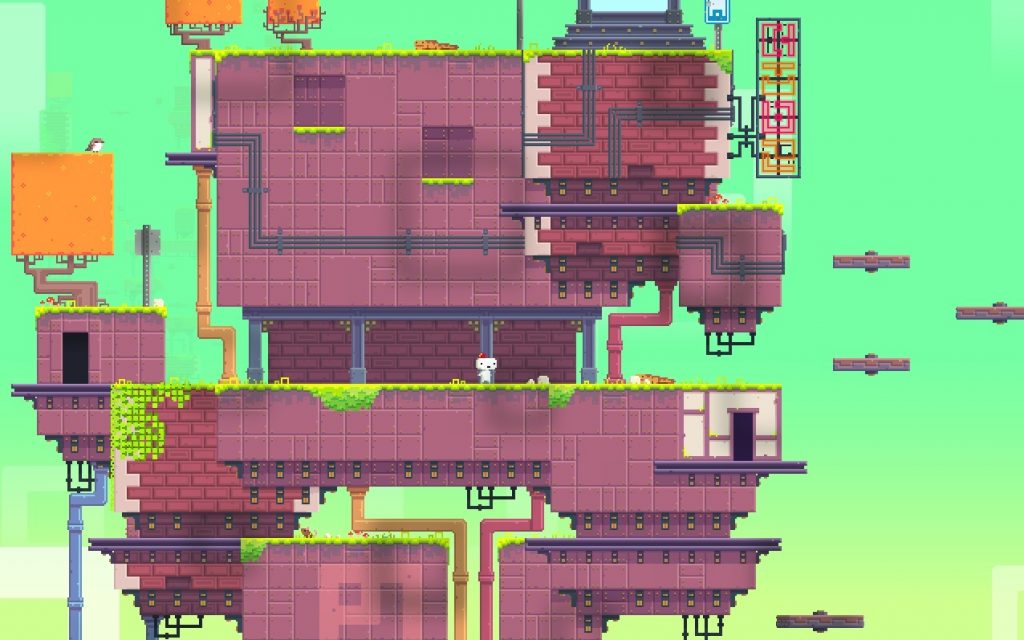 My favorite part about FEZ is actually the inventive nature of platforms in each area including the Forests, the Bomb Mines, the Floating Ruins, the Industrial Districts, and the Graveyard. For example, the lightning in the raining sections allows you to get a glimpse of invisible platforms which lead to more cubes. 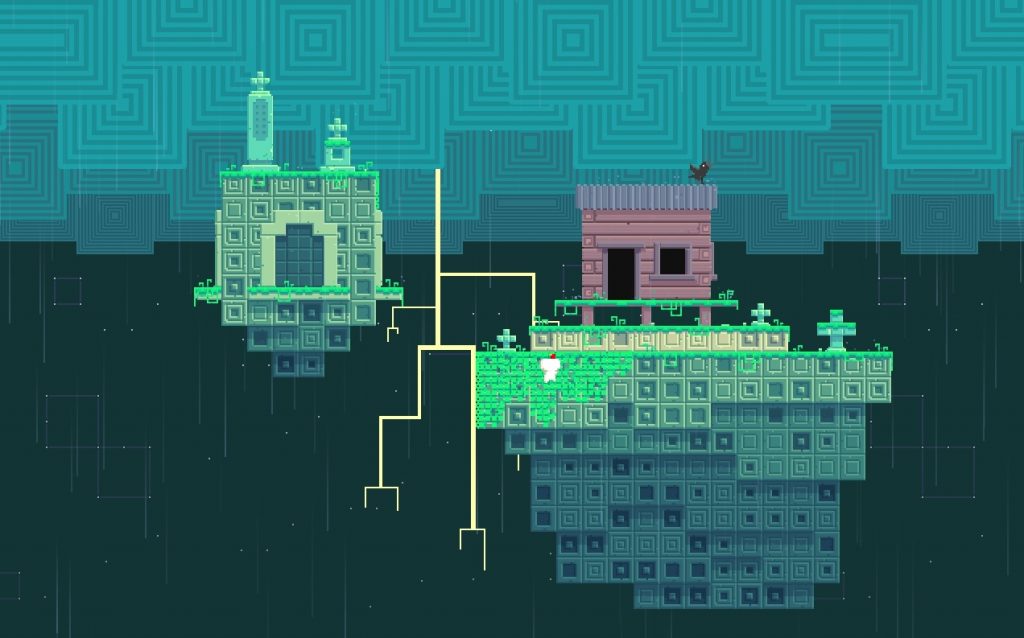 Instead of boring, flat levels, you have the ability to view 360 degrees of any area or obstacle, one 2-D surface at a time. You move Gomez using the arrow keys and spacebar. For those hard-to-reach places, you can hang from ledges and walk over gaps just by bridging the distance via length contraction. 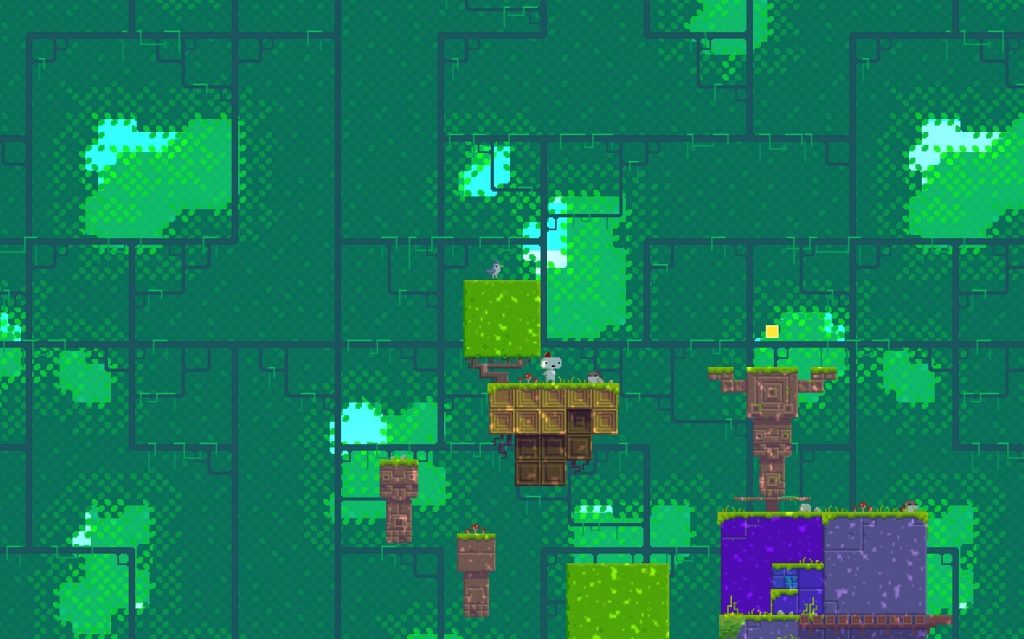 After all, it’s important to observe your surroundings to see where to go next. You never know where a secret door will pop up, leading you to a new stage. The good thing is, dying won’t result in a “game over”, therefore you are sent back to the last automatic checkpoint every time you miss a jump and fall to your death. 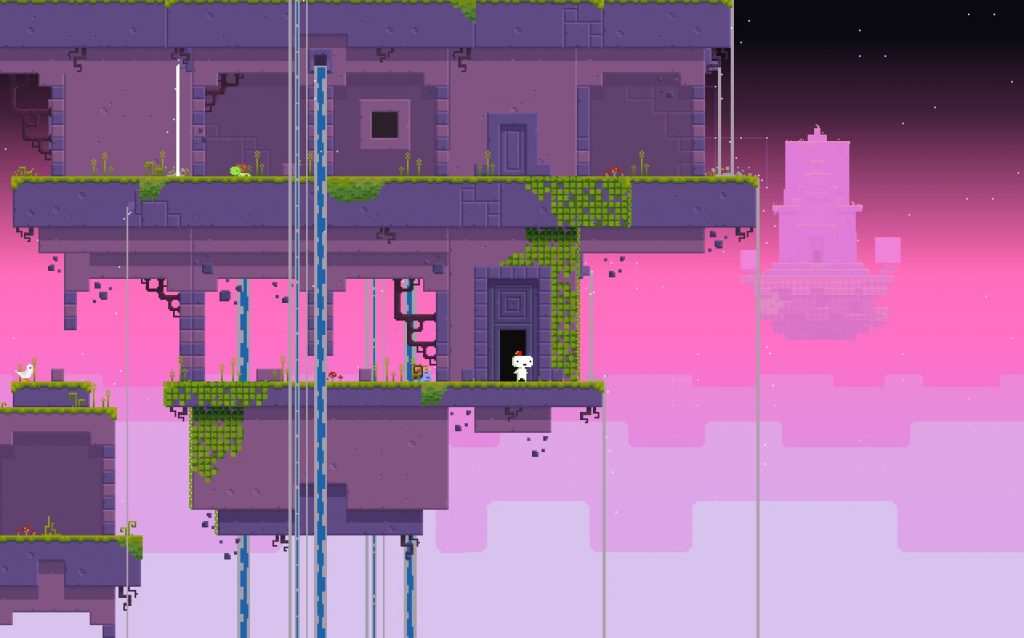 As an artist, I do admire FEZ’s use of pixel art, reminiscent of the 16-bit era of Nintendo DS games. The music has just the right amount of ambiance to keep the player engaged in their surroundings as they are exploring every inch of a level for hidden cube pieces. There are a few collectibles worth hunting down if you want a real challenge. 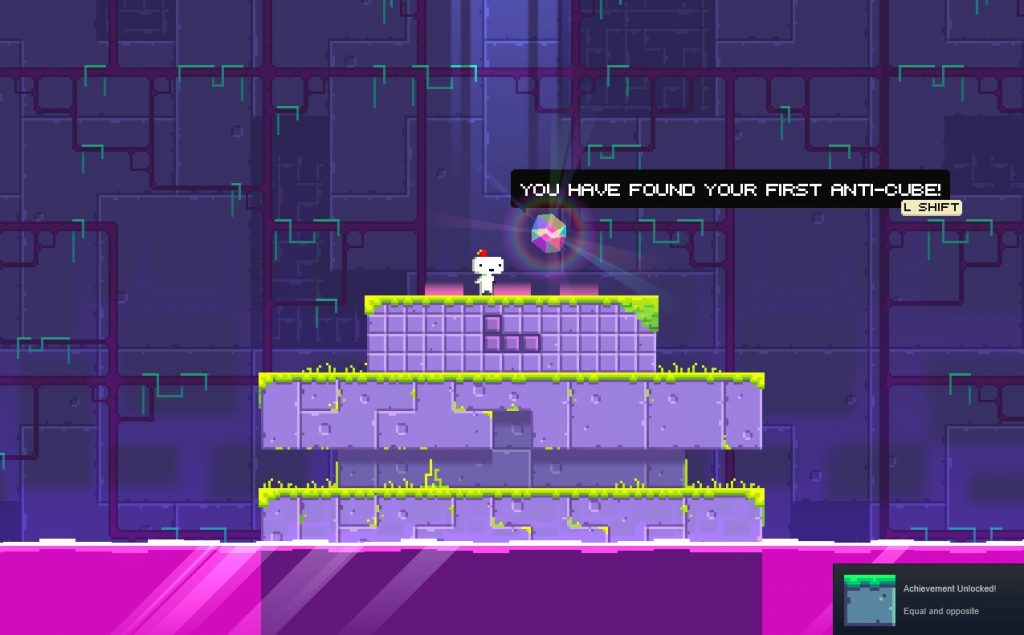 The opposite of a golden cube is an anti-cube. Those are cleverly hidden under tricky puzzles you would need a guide to solve (unless you know about Tetris formations). The same goes for tuning forks and any stone tablets you find. The game rewards you for inputting the correct code, sometimes with rare artifacts involved!

Since FEZ has countless doors that lead to other levels, there will be some rooms you can enter to find…you guessed it, more cubes! They are four-sided compartments that drop hints on where to find cheats and how to solve a puzzle by pushing blocks together.

And if you ever get lost, FEZ has a world map to help you keep track of where you currently are and places you haven’t been to yet. Each cube represents a single “node” or part of a region connected to many other ones of varying sizes. The large cubes all have a warp point to make traveling around easier.

However, you can’t teleport to any smaller regions so you will end up backtracking lot if you are a completionist like me. Luckily, the map has symbols to show where to find cube bits, treasures, or secrets in case you are interested in collecting all 64 cubes. You can turn it around or zoom in/out to see how the nodes are linked.

Former inhabitants of the FEZ world have their own language and way of living as depicted by pictures you find on ancient structures. It’s implied they once worship an owl deity who could see all other dimensions. The owls have a prophecy to share, that is if you know where to find them. At this point, I’m just speculating. 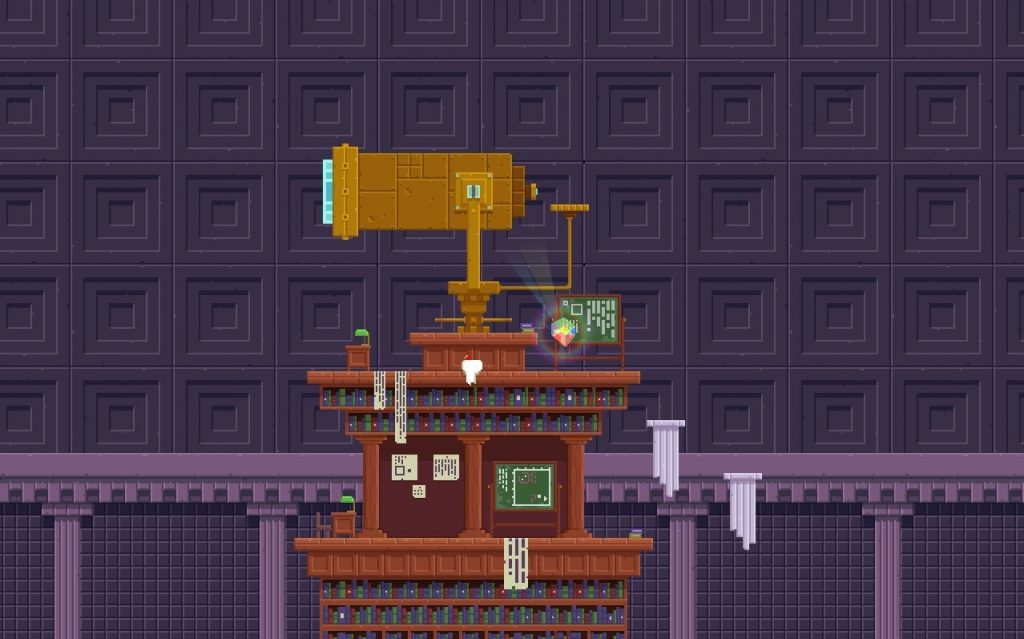 There’s an entire observatory built at the end of one level. It has a telescope if you want to gaze at the stars at night. The attention to detail is rather impressive, which is why I can’t help but take extra screencaps. The planetarium builds upon the existing lore though it’s entirely optional to visit before completing the game. 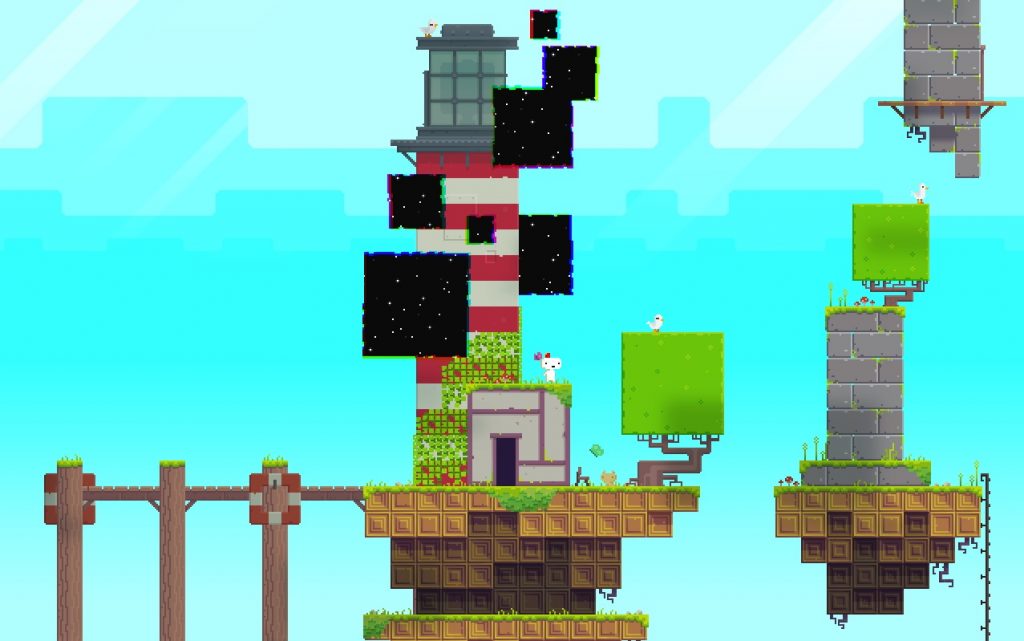 Those rips in the space-time continuum will get more aggressive as you collect more cubes. These are the only obstacles that seem to follow you around and can be lethal on contact. It won’t be long before they take up most of the screen, preventing you from reaching your destination.

To wrap things up, I wouldn’t consider FEZ to be a 3D platformer. It’s more of a hybrid of the two: a 2D platformer that covers four sides of a cube world. You are given the FEZ hat to rotate the entire level in any horizontal direction to help Gomez stop the black holes from destroying his world.