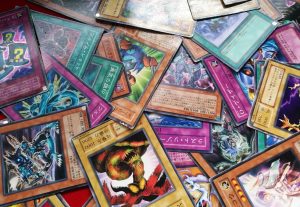 These games randomly reward you with cards whenever you play them though you are limited to receiving only half of the total number of cards in any setting. I think it does encourage people to trade them for the other half by being more social.

You are qualified for a booster pack once you have all the card drops in your inventory per game. Booster packs give out three trading cards each, where higher-level players have a better chance of finding these card drops over time.

Basically, you need to trade for the other half from either community members or your friends via the Badges page. Once you collect all cards in a game’s set, you earn a badge that can be crafted once you visit your Badges in Progress page.

It is also the place where you’ll know how many more trading cards you need to complete your collection and whether your friends own the remaining cards you don’t have yet.

Feel free to cash in your badges for an adorable emoticon, a special profile background, or that newly released DLC. Extra points for those bragging rights when you join Steam’s discussion forums. Like a game outside of a game, your participation in Steam events will earn you some exp points.

Over time, you will level up in which you are provided with better customization of your profile and expansion of your friend’s list which is only beneficial if you are already a social butterfly hoping to showcase your rare virtual items or best achievements.

What’s really cool is that you can sell your trading cards on the Steam Community Market.

If you’re a fanatic for collecting DLCs that help you gain an advantage in-game, then you’ve come to the right place. Are you trying to obtain elusive foil trading cards but just don’t have the time/patience to rely on sheer luck to earn one? Well, it is likely to be sold by another player somewhere in the forums!

But from what I’ve seen, a large chunk of the DLC comes from Dota 2 and Counter-Strike: Global Offensive. Individual listings consist of weapon cases you can download in-game ranging from a few cents to over $30. There are a lot of customizable skins to choose from!

I suppose that’s why the Steam Card Exchange was created. People love their video games but they also want “shiny” collectibles derived from said games if you catch my drift.

Now don’t confuse these with video game tarot cards which are posted on Steam Workshop but for purely aesthetic reasons.

Although Steam trading cards are no longer in their beta stage, their support team is still working on assigning badges to more games.

It’s likely that they will expand the trading system into letting players develop their own games using badges in the distant future. The current one drops cards depending on how long you’ve been playing.

Have you ever actively tried to earn cards this way? Leave your comments below!

One thought on “Steam Trading Cards-Play Games to Earn Rewards”