Steam Early Access
Games that Evolve as You Play Them!

What does it really mean when people put their games on early access? If you haven’t heard of Early Access, it’s when Steam made it possible for gamers to give feedback on the quality of games while the developers were still in the middle of adding assets, fixing bugs, and making updates to their game.

Steam’s lax policy on releasing Indie Games has always attracted an influx of gamers worldwide, especially people who are passionate about game creation. At some point, Steam decided to expand on the game development process by involving their community aka you guys since you are their customer base. 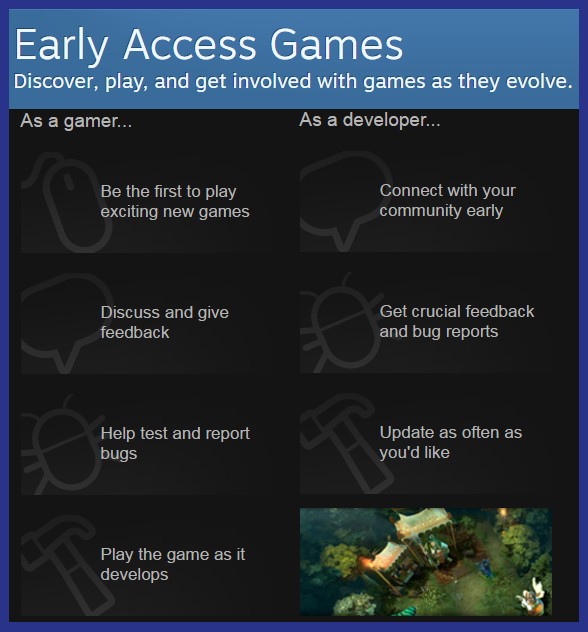 Steam is aware of the gaming industry’s standards but they don’t want to be the only decision-makers on what games should be available to the public. After all, the gaming community is heavily divided among the casual/hardcore gamers, RPG players, 1st-person shooter fanatics, DLC collectors and so on.

Steam insists that the introduction of early access will help bridge the gap between gamers’ expectations and developers who aren’t familiar with the community’s preferences on what they want in a title release. It is a valuable experience on both ends when people can offer feedback on how a game is produced step-by-step.

The Steam community likes to be informed about new content being added or updates that affect gameplay from past versions. That’s why many devs announce when big changes are made to their titles. You can find them on the front page of a game before you try.

Devs would sell more copies if they appealed to a larger audience or amassed their own loyal fanbase. People usually appreciate a dev who is willing to listen to their fans’ suggestions and is mature about responding to criticism. Devs that maintain a good reputation will convince people to come back and buy their sequels.

A few devs do offer discounts to the first buyers on early access based on their goals to raise commitment from interested players in providing the most helpful feedback. The price of a title is prone to change over time as bits and pieces are added/taken out of the game.

Placing titles into Early Access is definitely an advantage for Indie developers: They are able to communicate with fellow Steam users via in-game chat or through their contact info. They might establish a group voting system and even forums where players can comment on new features added in each update.

Devs often do respond to Early Access reviews to show gratitude towards reasonable critiques, moreover explain how they are trying to fix those specific problems. Of course, there are others who only want to defend their way of doing things.

In order to participate, all you have to do is go to the front page of Early Access and look through their huge list of titles until you find one you would love to play. Click on the image below to view Early Access on Steam. 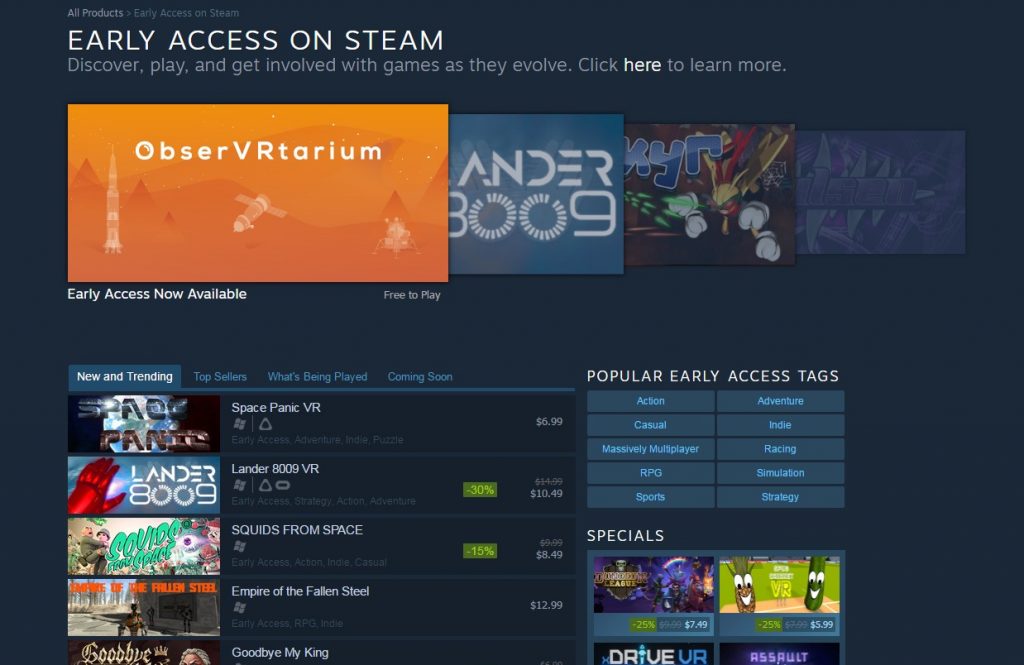 You do get access to screenshots and videos that accurately represent Early Access games in their current state to help you determine if the game should stay the way it is or needs a complete overhaul of some kind. Some games are in the beta phase while others are still in alpha testing so not everything will be playable.

You can tell which titles in alpha have the potential to become full-fledged games when you check the store page since they show how often it is updated and how active the developer is, by whether they have the core elements setup already.

Now Early Access should not be confused with pre-ordering a game because once you purchase it, you will own a copy of the game in its current state. There is still the possibility of titles being discontinued if the team of creators is incapable of finishing their work.

You’ll notice that store pages display what developers are saying. It is structured like an FAQ with questions such as “Approximately how long will this game be in Early Access?” In addition, “How is the full version planned to differ from the Early Access version?”.

There are other tidbits of info about Steam achievements, languages, the publisher name, genres, system requirements, and discussions. But those of you with shorter attention spans will certainly admire the remarkable screenshots they put up.

Perhaps you’d prefer to watch trailers that exemplify the creative team’s efforts towards visually stimulating gameplay? Eh, it’s up to you to decide really.