FTL: Faster Than Light is a strategy-based simulator where you’re a spaceship captain, trying to save the galaxy from the invading rebel fleets. Traveling from one point to another, you will encounter many perils that lie ahead. You are responsible for keeping your crew alive by directing power towards the ship’s main functions. 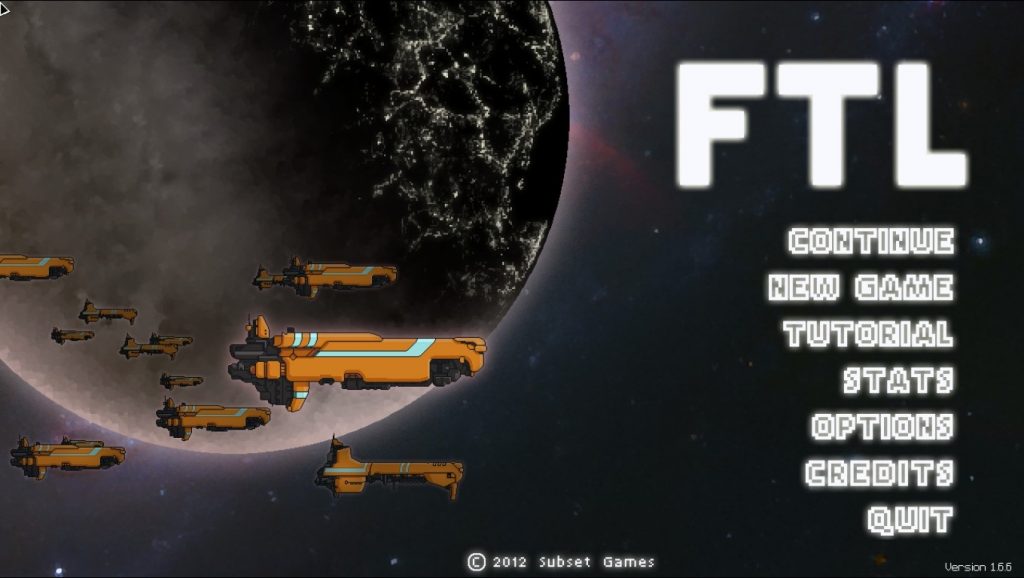 Mainstream Sci-Fi has painted the future of space travel as a series of breakneck adventures aboard a ship, risking life and limb at every opportunity. While that may be a bit of an exaggeration, the concept of a space voyage is rather exciting to the average gamer, who has no chance of becoming an astronaut. Fortunately, we have FTL: Faster Than Light to scratch that itch for outer space exploration.

What is FTL: Faster Than Light?

FTL is a game set in the distant future in which Space has been thoroughly colonized, in an empire where humans have banded together with other alien races to make a single Galactic Federation, giving people the freedom to pioneer their way around the stars. “All is fair in love and war” pretty much.

Of course, there’s always someone who opposes the status quo, no matter how good their intentions are; a separatist rebel group of humans dislikes having the empire push its agenda on them and thus garnered enough support to blast the federation into space dust. That is, unless you have anything to say about it. 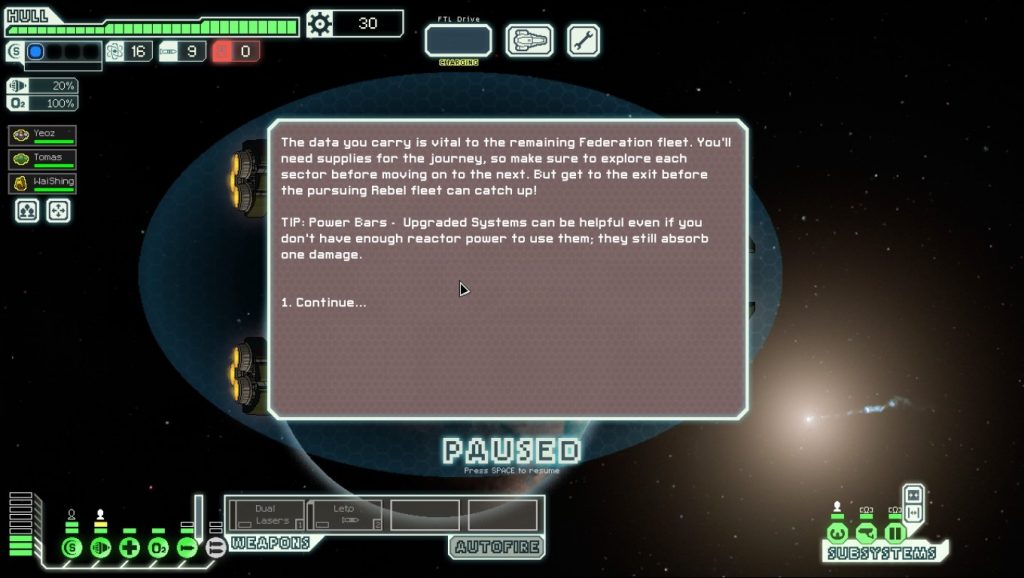 You pilot a ship manned by a crew, allied with the Federation, also on the run from the encroaching Rebels taking up every inch of the galaxy they can get their hands on. If you can make it back to the Federation Fleet safely, the information you carry could very well tip the scales of this seemingly endless war in your favor.

And so you must be on the move, from sector to sector, battle after battle, quest after quest, to become the driving force behind the Federation; a crew with a powerful enough ship to stand up against the rebel forces. In the end, it all comes down to you, your crew, and your ship facing down the Massive Rebel Flagship for a well-earned victory over the entire rebel army.

The game begins with you picking a ship out of eight prototypes. At first, you only have access to one spaceship model, but don’t think too hard, for the game will drop hints towards unlocking each ship and helping you obtain more layouts. These layouts and spaceship models provide you with different crews, weapons, and augments, allowing you to customize your ship’s offensive and defensive capabilities. 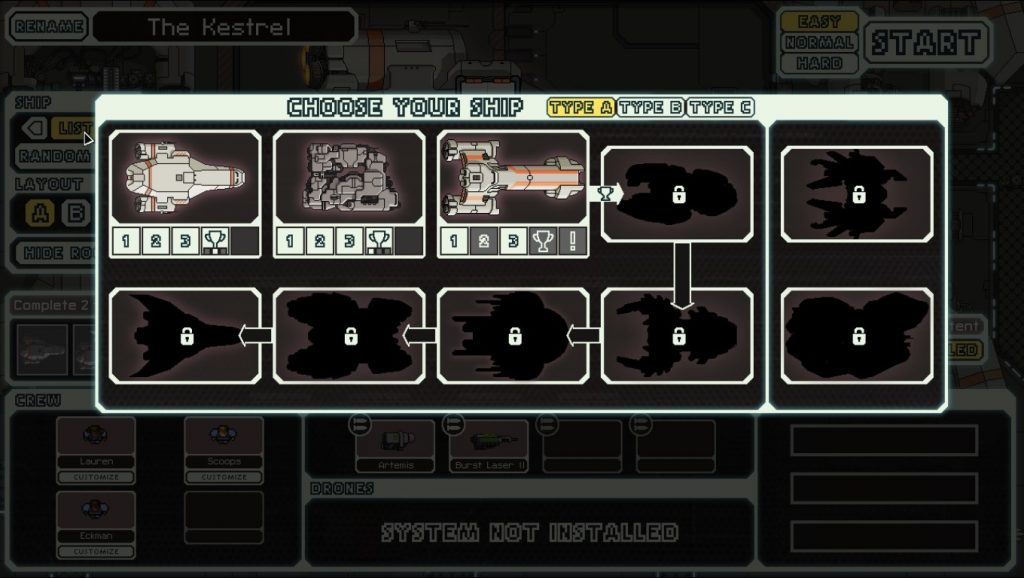 While you are forced to pick the default spacecraft, there won’t be any actual limits to how your game could go. Because FTP is a real-time strategy game with a few dialogue driven quests, your success rate is determined by how you respond to dangerous encounters with rogue pirates or scavenge abandoned areas for parts.

You are tasked with building up your ship’s systems, crew, and equipment so you can eventually defeat the monster that is the rebel flagship. Being able to think fast is the key to blowing up the enemy’s ship instead of getting your own engine set on fire by incoming missiles, leaving you a sitting duck in the heat of battle. 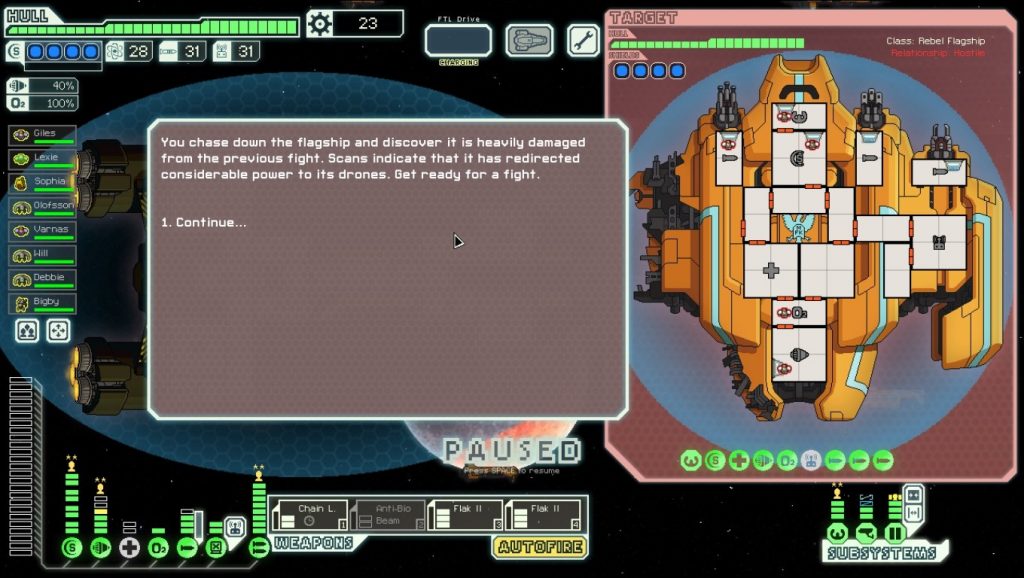 Down to the brass tax, this game ranges from being fairly easy to annoying all the way through and the difficulty will spike a lot, especially at the end. That’s why you need to “git gud” at maintaining your ship’s essential functions. At points during your journey, you might get the chance to stop by a station to get new equipment, better systems, more resources, or hire new crewmembers.

Speaking of your crew, there are a handful of different options for you to choose from: Humans are the most common recruits, leveling up their skills the fastest out of everyone else. (You always start with least four members.)

Engis are androids who are weak in a fight but can repair ship damage rather quickly. Zoltans are frail too, but they emit energy, supercharging any room they are in. Mantis are monsters in a fight and are very agile, but they suck at fixing things. 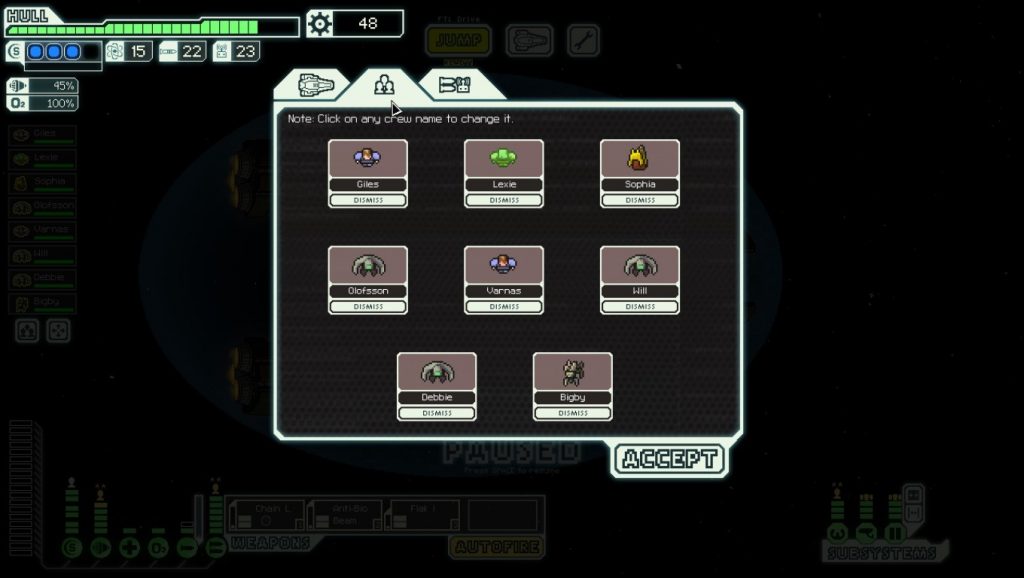 Rockmen have massive health and are immune to fire, however, they are as slow as…well, a rock. Slugs are psychics that warn you of the enemy’s position even if you can’t scan their ships. And Lanius are beings who don’t need to breath but will slowly drain breathable air from the areas they are in. There is also a secret race in the game, but they require a lot of work and luck to acquire.

Battles take place in real-time, but you can pause the game to put together a plan without being overwhelmed by the missiles. Your weapons slowly charge up and you must target specific systems to make the enemy helpless (aka their weak point). You should keep an eye on where the enemy is targeting and immediately repair damage to your ship before the shields are disabled. 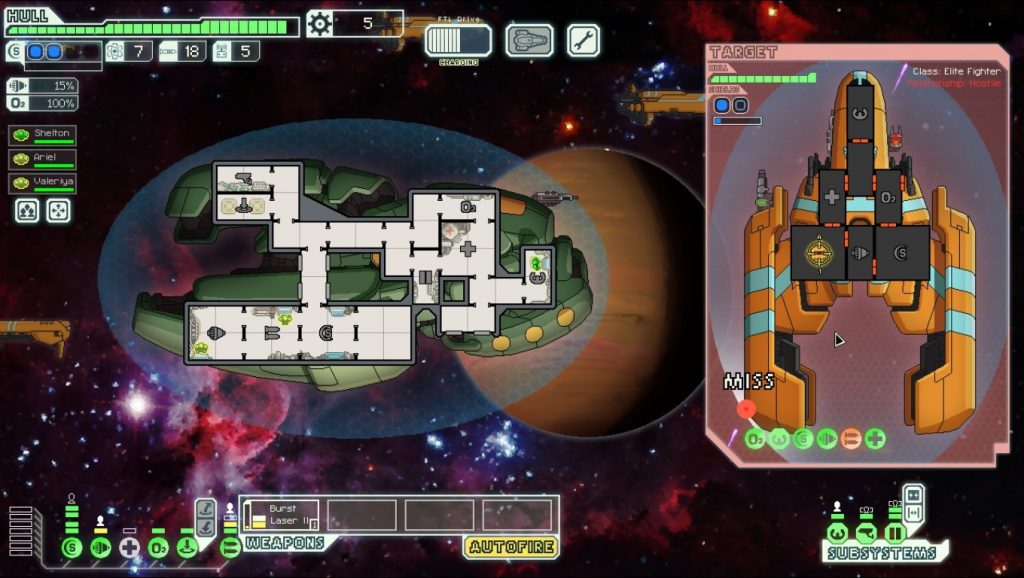 If they own a weapon you can’t counter, target their weapons to break it. If their shield is stopping your weapons, then blow up their shields. After each fight, you can gain scrap to spend or resources to use for ship repairs and upgrades, adding more bars to power each system including a medical bay for healing.

You may spend scrap at a shop, or use it to upgrade your systems to improve your ship’s durability when facing an asteroid belt or some hostile intruders. Your best bet for becoming good enough to face the rebels is to explore as much of a sector as possible before jumping to the next one, but the longer you spend in a sector, the more likely your crew will get caught in the rebel invasion. 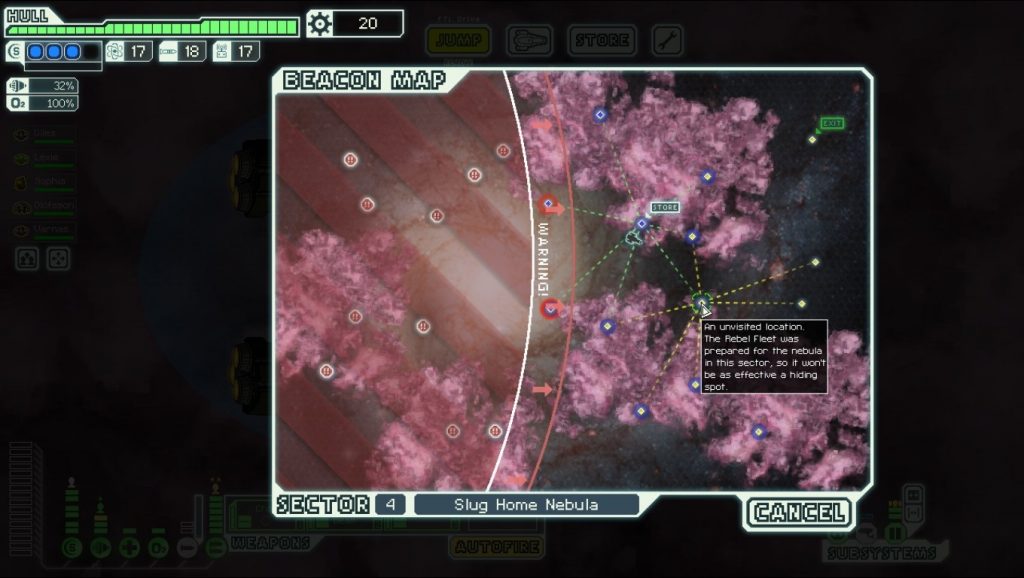 Because of how FTP is designed, you need to grow stronger, and yet, you are put under pressure the entire time so it becomes a game of limited move sets, in other words, deciding how much you can do before escaping at the last moment.

However, that is easier said than done, as the game operates on RNG (Random Number Generator) for your upcoming quests, and thus, the game may never give you what you need to survive in the next sector until it is too late.

My Thoughts on FTL as a Whole 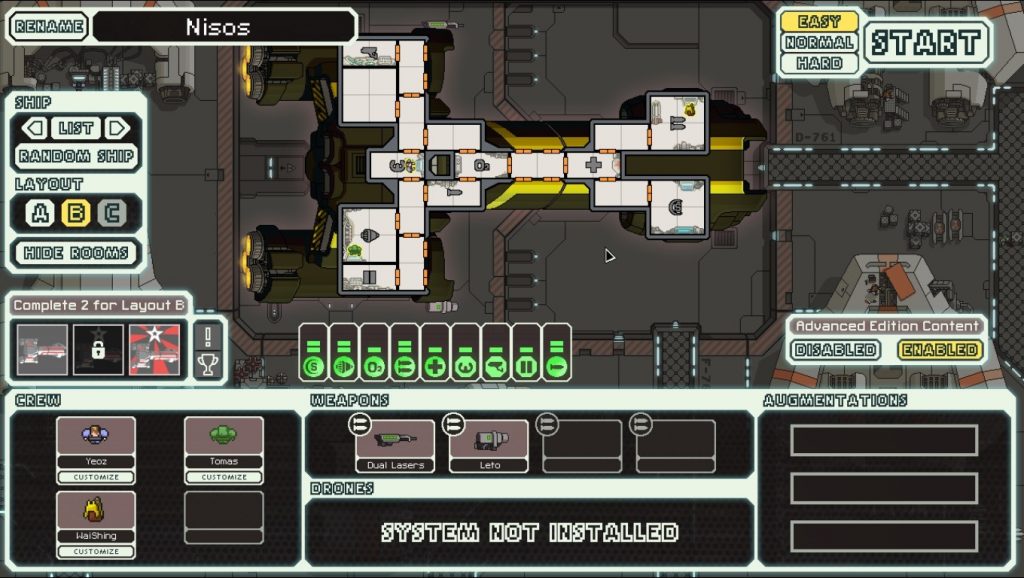 I honestly love FTL! I’ve been playing it on and off since I was in college. I’ve logged almost 150 hours into it. This is a game that tests you strategically, or at least I think it does. Normally, you feel like a game would get monotonous with the same battle system over and over and it does a little.

But occasionally, you get something like a drone hacking your weapons, a fire breaking out in the med bay, or the oxygen levels depleting to keep you on your toes. In those moments, you lean out of your chair and say, “Oh god no, I gotta act and fast!”

The only real downside to this game is the extent to which the random nature of your adventure can get taxing when you need the freaking stars to align to get a non-deadly run, but other than that, it is a fun game that’s well worth the price you pay for on Steam.