Yes…this was a long time coming. I finished Hatoful Boyfriend awhile back but it truly deserves a special spotlight for its sheer absurdity. Hatoful Boyfriend, the now-famous pigeon dating sim, is a favorite among the Let’s Play community. It is the touching story of a human girl enrolled in a school of prestigious pigeons.

Why does this exist?

I honestly have no idea. According to Hato Moa, the creator of this game, she tried to pull an April Fools joke by turning the dateable boys in an Otome (female-oriented) visual novel, into actual pigeons. Hatoful Boyfriend came into existence probably because she wanted to parody dating sim cliches such as the “childhood friend”. 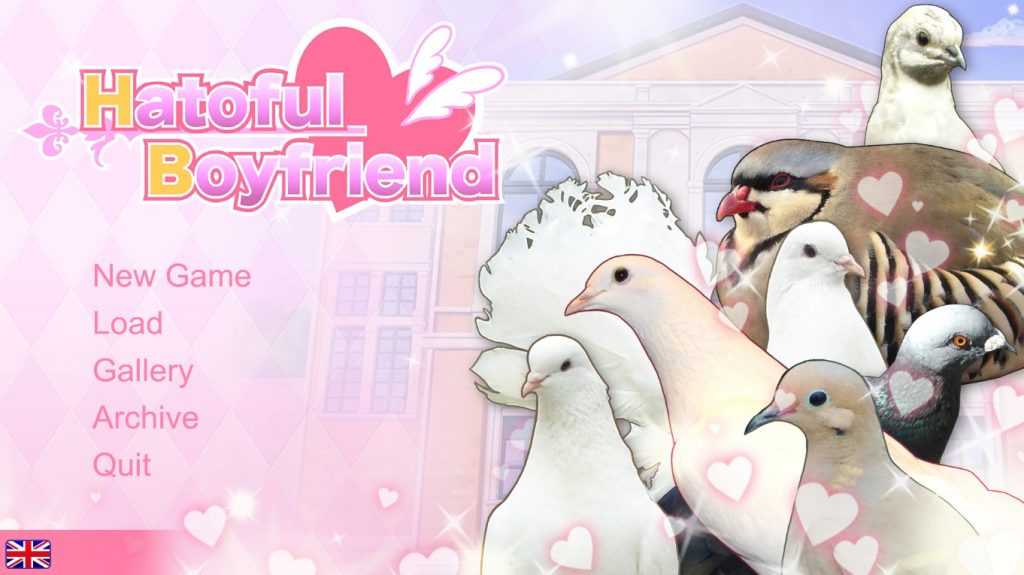 For some reason, it quickly gained popularity in Japan and was ported to the US via fan translations. It is a visual novel by nature, with a bigger focus on the storytelling. Now the Steam version I own is of much higher quality as all the backgrounds are redrawn. You can see the difference from the 2011 version in the upcoming video.

The game assumes you’re a girl and sets your character’s default name to “Hiyoko Tosaka” unless you change it to something else more suited to your tastes. Next, you are asked if you’d prefer the birds to appear as human portraits when they are first introduced.

Thus our unlikely story begins. At St. Pigeonation’s, a school for talented birds, you are the only human student. Like colleges in the real world, they prioritize birds of different backgrounds. This is where you’ll meet every birdie, perhaps even snag yourself a cute pigeon boyfriend in the end.

Does the game live up to its hype? Well, let’s find out! But first, you’re given a long introduction of your feathery classmates and faculty. They indeed have unforgettable personalities and unique quirks that will keep you entertained throughout the story.

The female protagonist of Hatoful Boyfriend. Hiyoko is a hunter-gatherer human living by herself inside a stone cave. To illustrate, she mentions having to hunt for food. It is unclear where she comes from as we are never told anything about her family. To summarize her stats; She has 1 Wisdom, 5 Charisma, and 800 Vitality.

Hiyoko’s childhood friend who goes to school with her every day. He is kind and cares about your well-being. Ryouta is a rock dove with a weak stomach. He’s going to need you by his side to cope with the declining health of his hospitalized mother.

The homeroom teacher, a white quail inflicted with insomnia who often falls asleep during class. He specializes in math and physics so raise your intelligence to impress him on midterm exams. There is a hint of sadness in his words. Perhaps he lost a loved one?

A puffed up, arrogant, French noble bird who feels he is stuck with a bunch of vulgar commoners. He is the self-appointed student council president who holds classical music in high esteem. But why does he show such disdain towards his brother Yuuya?

A mourning dove with an eerily quiet presence who spends his days reading at the library. He refuses to leave the school no matter how hard you try to persuade him. It seems none of the other birds ever notice him. Is he really just a social outcast?

An upperclassman and a popular ladies-man (bird?) who is likely to flirt with you at all times. Acting as a gentleman, Yuuya tries to escort you home safely. However, he is certainly hiding secrets underneath that facade. Could he be a secret agent on the run?

A suspicious-looking partridge who is in charge of the infirmary. He can be unpredictable, prone to sneaking up on anyone who dares to snoop through his drawers. Dr. Shuu is rumored to be the culprit behind the disappearing students. Avoid him at all costs!

The oddball out of every birdie. He has an extreme obsession with pudding, seeking the savory taste of the ultimate pudding. He is the super-fast captain of the track team. All he says is “Coo, Coo!” which is impossible to decipher without captions.

A crazy Luzon bleeding-heart dove who speaks almost complete gibberish, believing in the presence of demon spores. He is only available after you wish for the “mad love of a fallen angel.” He refers to Hiyoko as Apostle of the Blue Sky.

A badass female sparrow who offers you a ride on her scooter. She has a job selling Takoyaki but once belonged to a biker gang.

A yellow budgerigar with a gangster accent who frequents the cafe. He and Azami were once a couple.

An elegant parakeet who is Torimi Cafe’s manager. You meet him by agreeing to get a summer part-time job.

You encounter these guys on every bad ending where you fail to properly romance one of the pigeons.

Mister One is a cockatiel janitor who keeps to himself in a maintenance room. He is an acquaintance of Yuuya’s.

Choices and Their Outcomes

The game is divided into three terms as the school year progresses. Your first decision on 4/11 is to join a club. As Hiyoko, you can choose to be on the student council, track team, library staff, or infirmary staff. This affects which bird Hiyoko spends more time with. 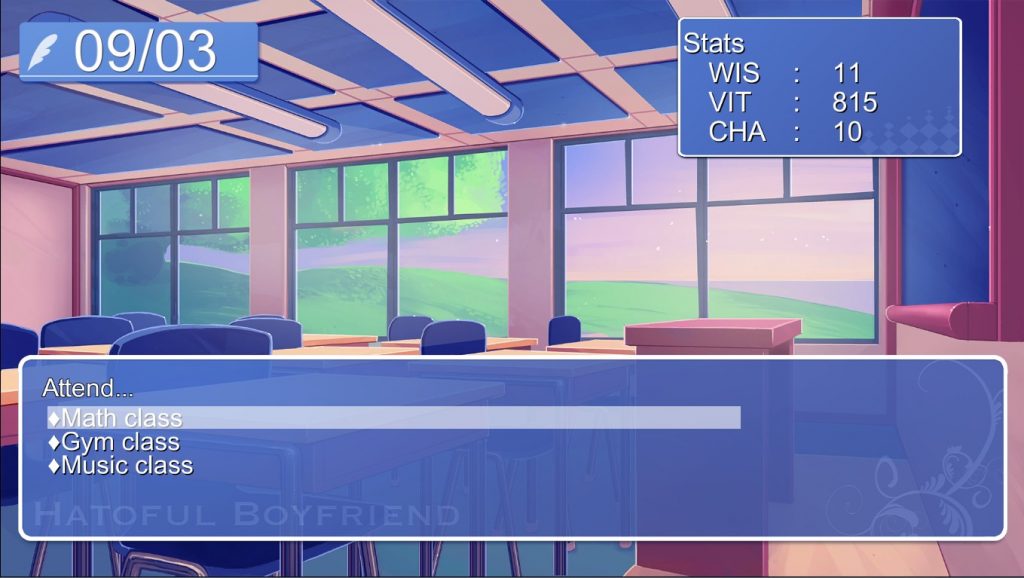 Elective days are a great opportunity to raise your stats. Attend math class to gain intelligence, gym class to increase your vitality, and music class to acquire charisma. Each bird prefers a different stat so you need to level the right one as high as possible, or else you won’t get the best ending!

There are some special events to look out for as Hiyoko has the chance to talk to one of the birds. The cultural festival is very significant. Like a real date, Hiyoko takes one of the pigeons to see fireworks. They react differently to the food and atmosphere which is quite entertaining as their personalities start to grow on you. 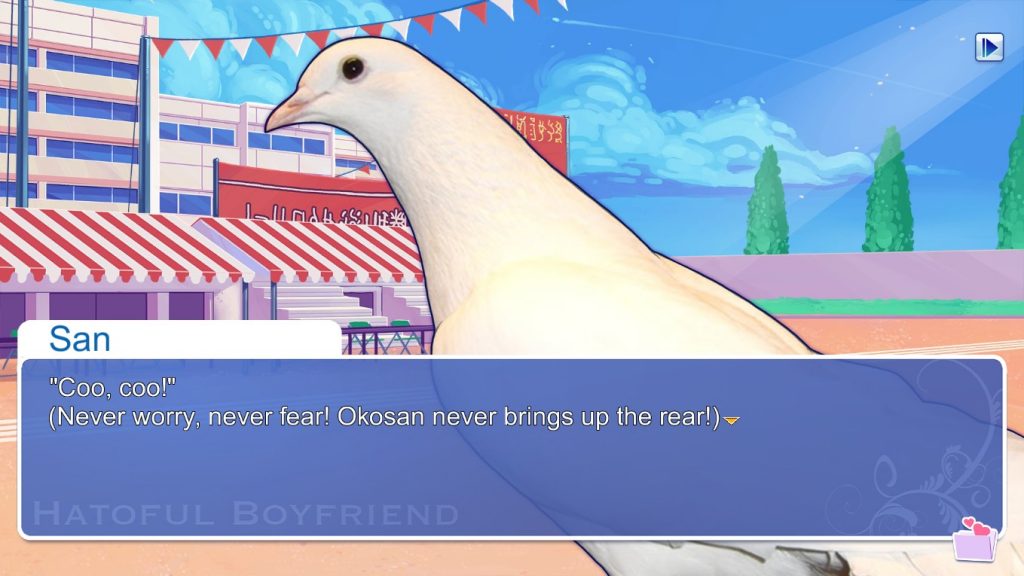 One of those events is the Sports Festival. Ryouta is doing a three-legged race, Oko-san has the marathon covered, Sakuya is one of the cheerleaders, and Yuuya is patching up injured birds. Who you hang out with will impact which path you start on! I wonder how pigeons could use human sports equipment… 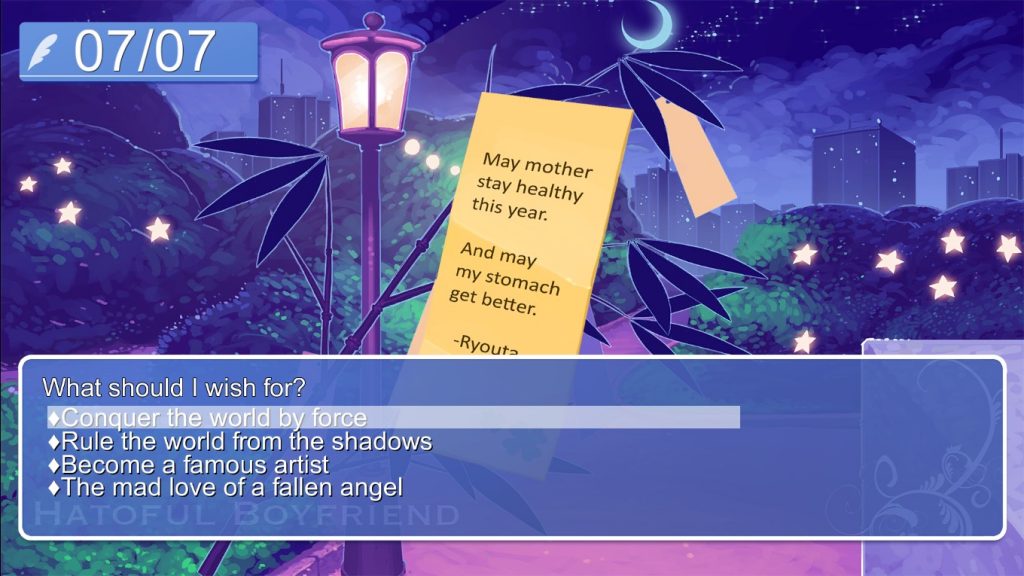 On Tanabata, Hiyoko can make a wish at the bamboo tree. If she is already on good terms with at least one bird, she can find out what they wished for too. It is a good indicator of which path you are on. I love how ruling the world from the shadows is on par with becoming a famous artist.

Getting an Ending w/ Each Bird

Here is the full walkthrough I’ve found on Steam. It is difficult to unlock each of their best endings by trial and error alone. Sakuya, Dr. Shuu, and Okosan have a good ending and the best ending. Azami has her own endings despite not being dateable.

Always save after the long intro and any events you’ve already seen a million times before! In order to reach the true ending, you must unlock everybirdie’s best ending. Once you get those achievements, you should see the option to “Fulfill the Promise” from long ago upon starting a new game.

My Impression of the Gameplay

The majestic pigeon images are clearly cropped from real photos taken by the author herself. The only pet peeve I have is the lack of space to store save files. On the contrary, there are many branching stories making it a pain to reload past routes. A lot of choices are there just for fun.

Another one would be the school festival. Hiyoko and Ryouta are in charge of the Maid Cafe but the other birdies are running either a haunted house, a butler restaurant, or even a manga stand. This is possibly the first time I’ve seen pigeons cross-dress in a maid cafe. I’m not sure if this could appeal to furries either. 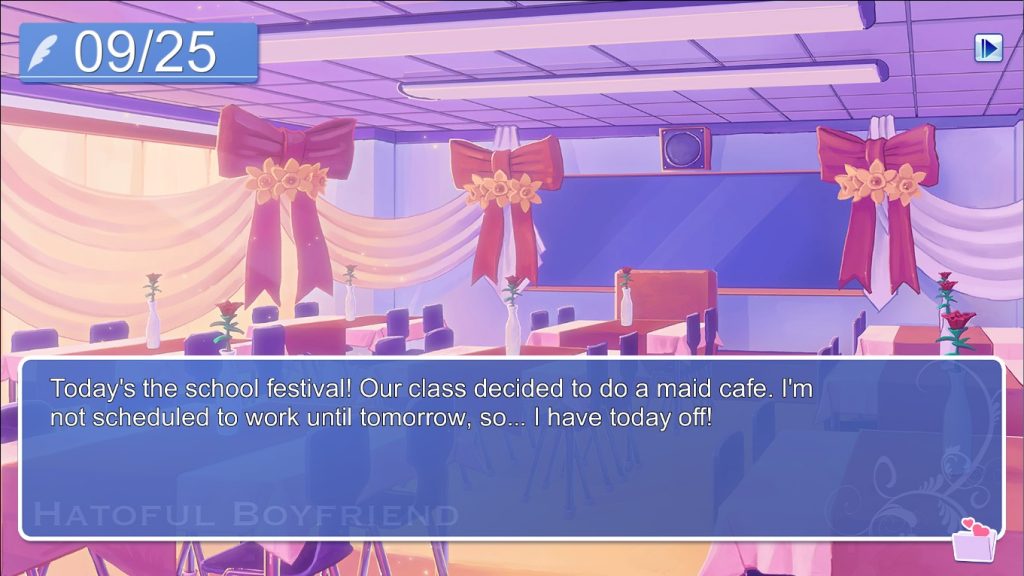 Instead of Valentines Day, they have a holiday called Legumentines where you buy beans for the boy you like. For some reason, people used to throw beans at pigeons. Each bird has a favorite coffee bean and reacts to it accordingly. Too bad it doesn’t affect the game. 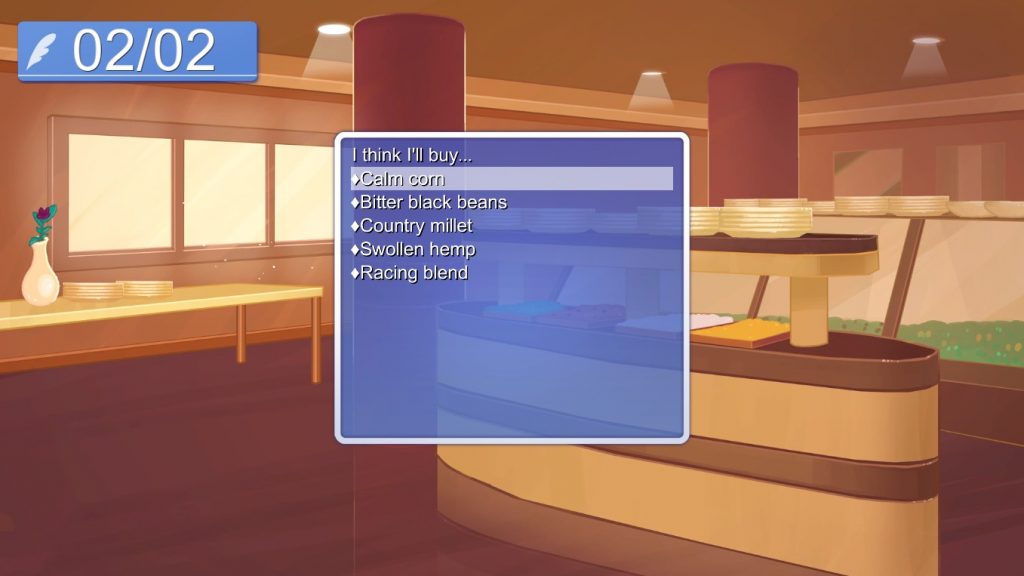 Conflicts between pigeons are played up for dramatic effect: Shuu and Nanaki get tense during a confrontation. Sakuya looks down on Yuuya’s background. Oko-san breaks everything in sight. Nageki and Ryouta’s routes become sad but heartwarming. In spite of all this, there is something sinister going on at St. Pigeonations.

Will you uncover the sinister plot hidden under Hatoful Boyfriend’s dating sim facade?