Renown Explorers: International Society is described as a strategic, rogue-like, virtual board game, the quintessential portrayal of an expedition in the 19th century. You will form a crew of three and lead them into undiscovered territories, eager for the adventure of a lifetime; the promise of fame and fortune at your fingertips.

Genre: A Strategy Board Game

There are two game modes for play: Discovery Mode is more forgiving with its multiple retries if you lose and the option to reload a save file at any given time. It’s best for people new to the game. Adventure Mode is the tougher, battle of wits against the CPU with less room for mistakes; the stakes are higher too.

But before you begin your journey, you must first select three crew members, one becoming the designated leader. Each character has unique traits like their country of origin, personalities, strong points, who they get along with, and what type of party (Friendly, Devious, or Aggressive) they are best suited for. 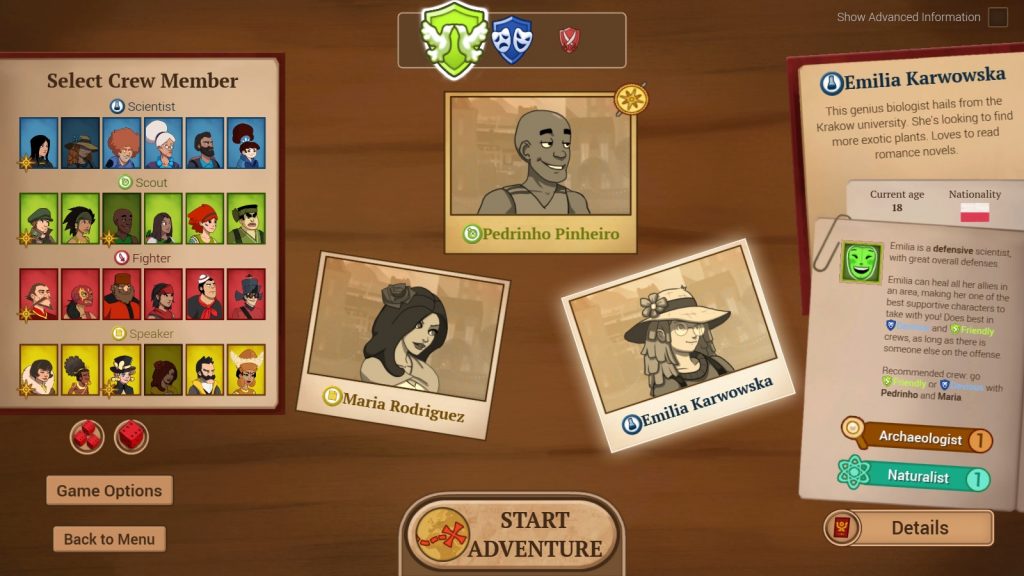 As a matter of fact, the game outright tells you who to pick for your secondary party members if you’ve already chosen a leader. You start with only four possible leaders: Anna, Harry, Victor, or Yvonne. They each have their own strength and weaknesses. If you picked Anna, she will give you more study tokens as a scientist. You can see that she has two points in Naturalist.

Their profiles explain whether they are a fighter, speaker, or a glass cannon, meaning someone with a strong offense and poor defense. You’ll notice how some characters do well in Devious groups while others prefer Friendly or Aggressive ones. Skills like Rogue, Beguiler, Tactician, Survivalist, and Diplomat improve your chances of getting a successful roll in events that I’ll explain later. 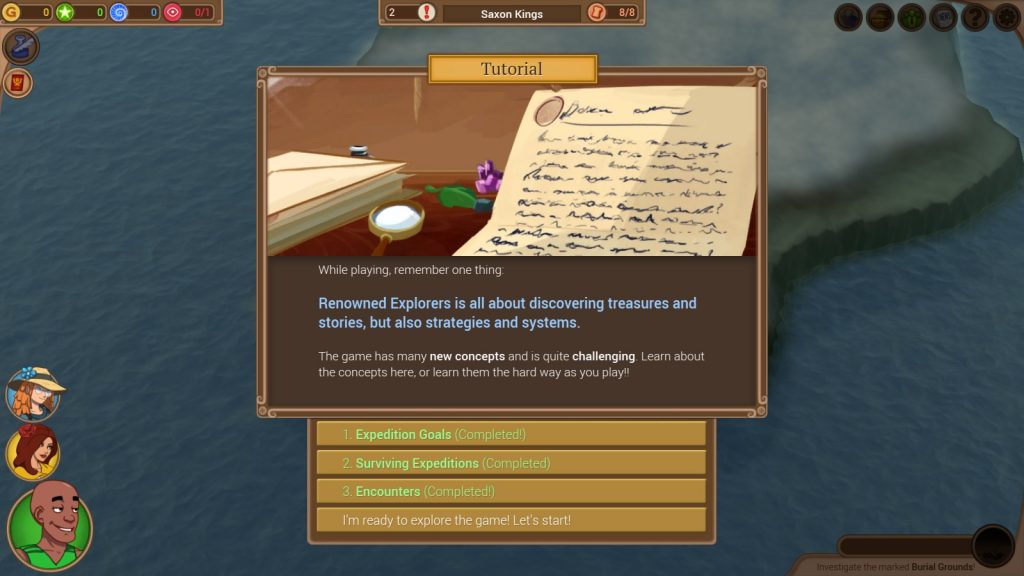 As far as I know, the game doesn’t have a steep learning curve. Just pick three characters that fulfill the roles of an attacker, negotiator, and tank for a balanced playthrough. Don’t actually skip over the tutorial guide, because it shows you what your expedition goals are, how to overcome obstacles and ways to complete encounters. The main point is to earn as much Renown as possible.

Gold, Status, and Research are the tokens you can earn from winning an expedition. They help contribute to your Renown in the explorer’s club. Gold can be spent on equipment, Status gives you recognition by others around the world, Research lets you specialize in a certain set of skills, and Insight lets your team work for rewards. These tokens are traded in for resources shown on the top left. 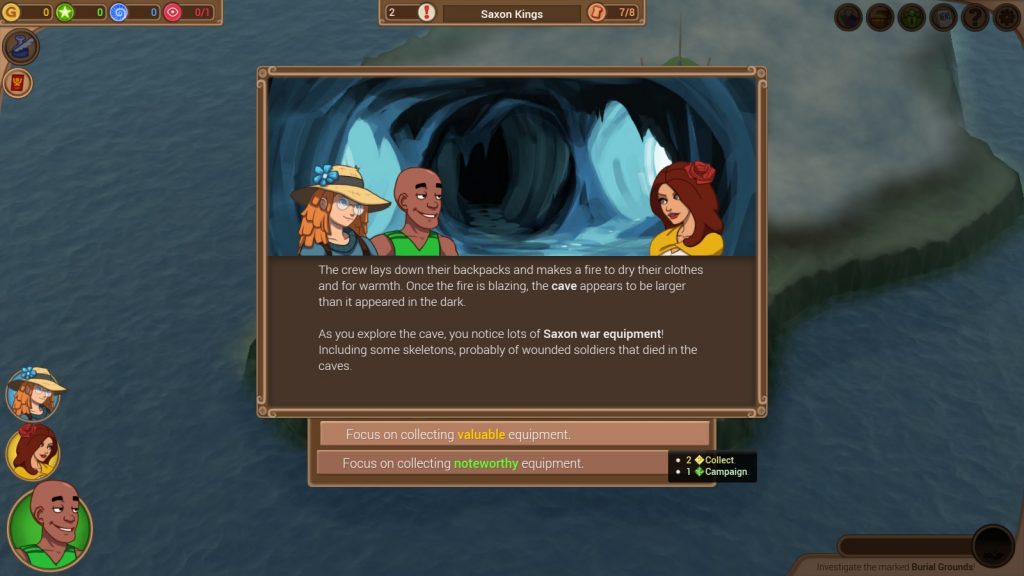 You always launch an expedition on one side of the map and have to work your way to the other end. Events are thrown in at random to keep you on your toes. In the event above, the party has stumbled upon a cave where they discover some Saxon war equipment. I’m given two choices: Either collect valuable equipment for more gold or noteworthy equipment for more campaign tokens.

The rewards are always visible beforehand so you know what to expect from taking certain actions. Many areas on the map are covered by clouds until you get close enough to reveal them. The regions are marked by symbols for gold, encounters, research, campaign challenges, potential supplies, and even the possibility of valuable treasures or undiscovered secrets.

In my opinion, the best part of the game has to be the encounters. You run into another hostile group. They challenge you to battle and you have three methods of resolving the conflict. One is to be friendly. This means using abilities to excite or impress your opponents. The other is to be devious; break their minds by insulting them. The third method is to outright beat them up.

Watch out for the mood changes. These affect the enemy’s behavior and how much spirit damage is inflicted on your party. Some enemies are resistant to status ailments like Sadden, while others might be weak to Enrage. The hexagons indicate how far a character can move each turn. The objective is to drain your opponent’s spirit until their leader leaves the board itself. 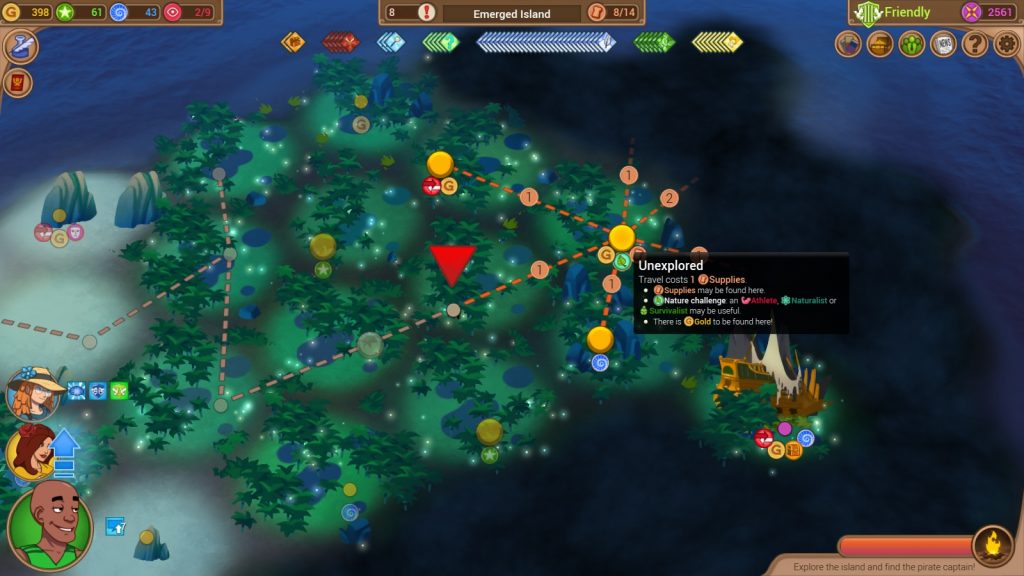 The two most important factors to watch out for, are the amount of food you have left (bread icon) and the number count on your team’s resolve. If you run out of food, characters will experience hunger pains, thus weakening their armor and speech defense. It is really bad when you run into battle because the party could be wiped out. Resolve must never hit zero or else, the entire game ends.

It’s usually a bad idea to explore every site on the map since you will run out of supplies pretty quickly. The dotted lines indicate where you can go next but you won’t be able to examine any areas more than a block away. The goal is to collect as many tokens as possible to convert them into Renown. You might discover artifacts to study or have an opportunity to earn some gold.

Whatever the case may be, you always want to aim for places that offer multiple rewards, especially discovery tokens and collectible treasures. Running into trouble isn’t necessarily a bad thing when you can turn circumstances around in your favor. Each time you go somewhere, an event is triggered. It’s basically a quick narrative to keep you invested in the adventure so far. 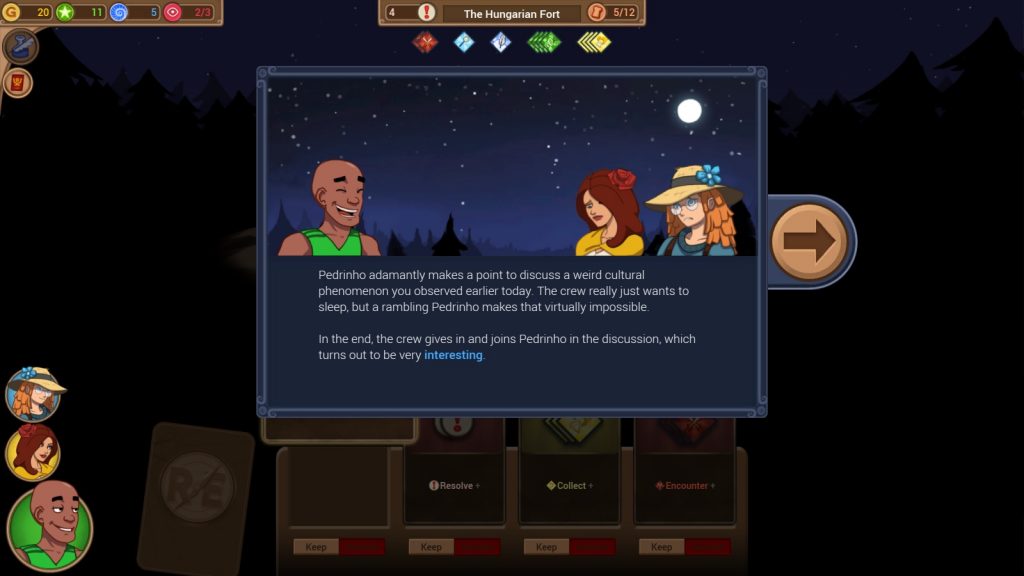 Notice how there’s a bar filling up on the bottom right. Once it’s full, your group leader can set up camp. Telling stories by the campfire will help them earn tokens to increase Resolve, Encounter, Collect, or Research. Sadly, you are limited to only one story per expedition.

Of course, getting those precious tokens isn’t going to be easy. Case in point, the private investor already decided to sell a rare gem to the highest bidder, but your party can persuade him to reconsider. The outcome of these types of events is determined by rolling the dice. The game calculates a character’s chance of success. 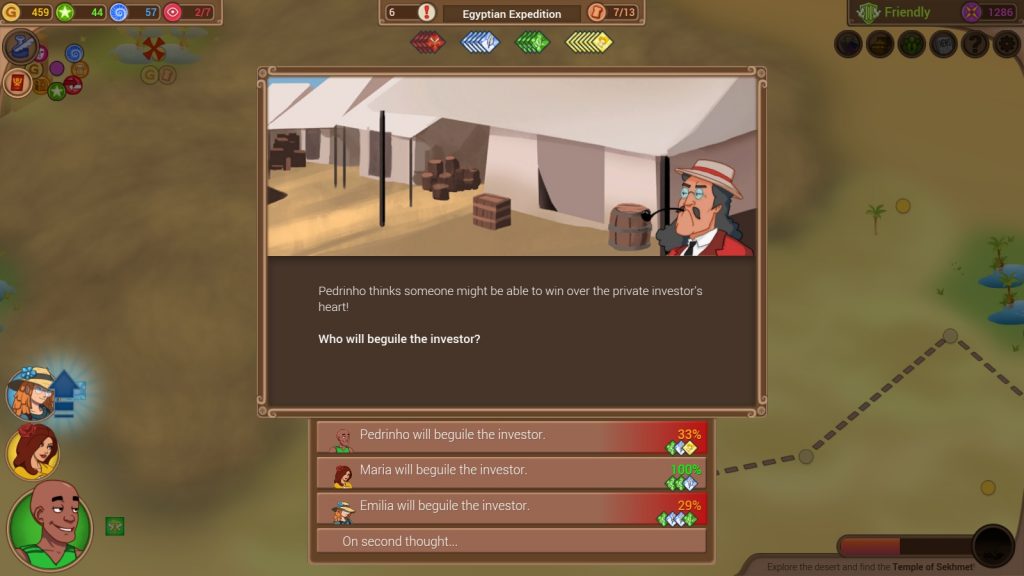 If it’s 100%, then you are guaranteed to win, though most of the time you have to roll the slot machine and pray that it doesn’t land on a skull. Overcoming a campaign challenge is great for earning extra gold, status, and research tokens. But failing comes with its own set of consequences as you’ll soon find out.

In the worst case scenario, you end up losing one resolve. It’s also possible to provoke an encounter because you failed to sneak past a bunch of Mayan guards or something. The narrative is honestly kind of flat, probably due to the lack of control you have over characters in the overworld. It’s noticeable from the lack of voiced dialogue too. 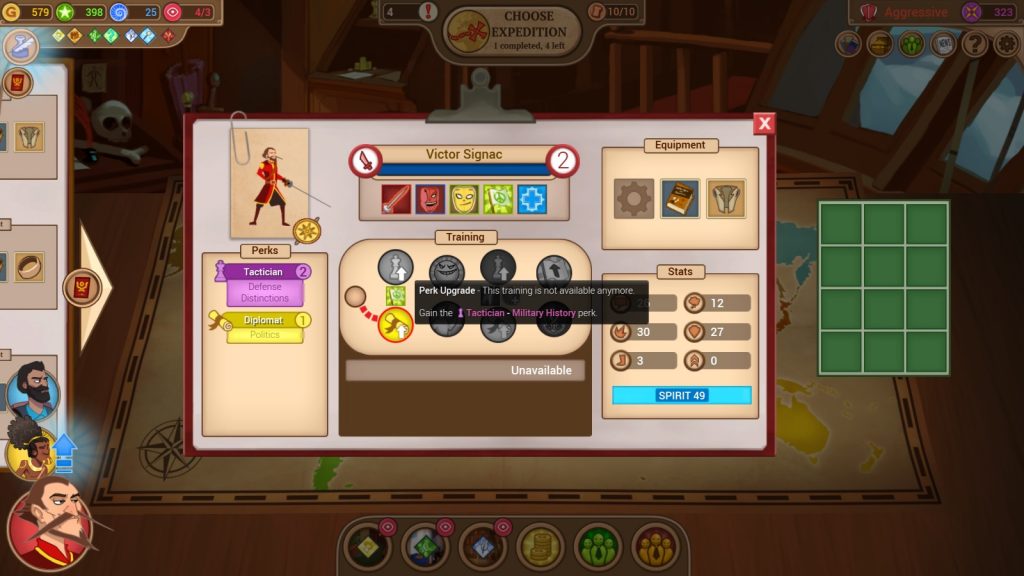 But, for some reason, I was able to overlook all of that. What made Renown Explorers addicting is really the skill-building aspect of increasing your party’s special skills, leveling up their perks, gaining new abilities and so on. You can view your party member’s base stats and equipped items by clicking on their profile.

It shows you the number of points in speech defense, armor, attack power, and movement speed they currently have. A good plan is to have the fighter be well-armored and the charismatic speaker buffed with speech defense so that they become good healers. Each person can equip a trinket, offense, or defense item to improve their stats. 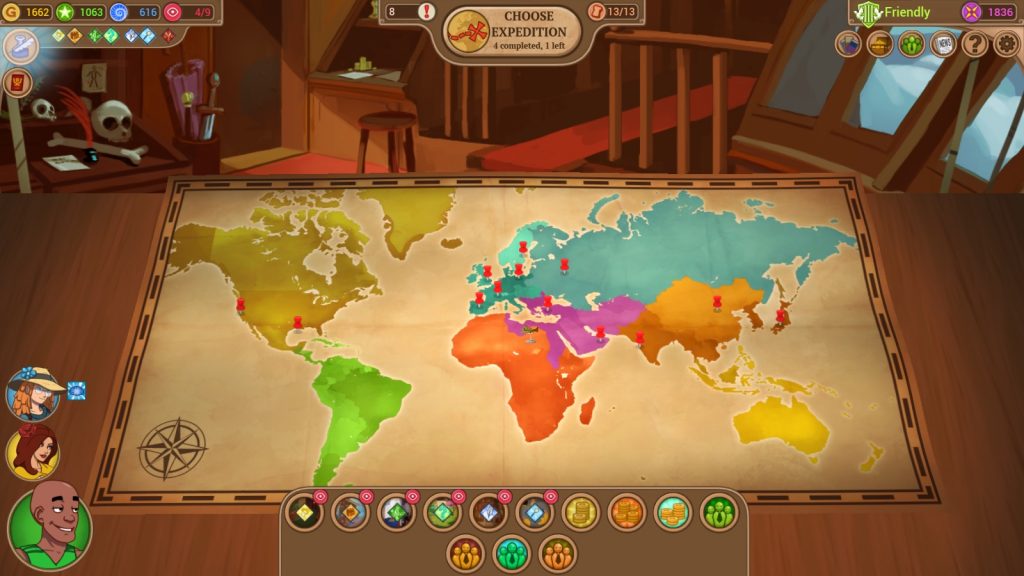 This is the world map you’ll be using in-between expeditions. The red pins point to places the adventurers can travel to. Each location offers a boost to your resources in some way: The team can perform jobs for gold, campaign for status, research at a library, and more. At London, sending a persuasive speaker to campaign for your cause will increase the group’s status. 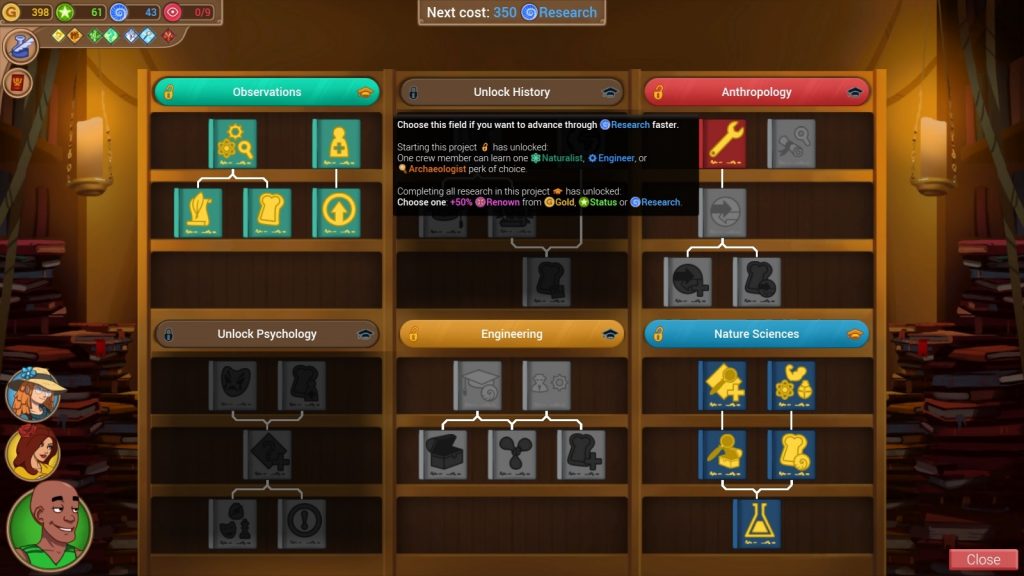 Research is quite useful if you are aiming for better perks to gain an advantage over tough rolls. Expeditions do get harder over time, so you want your adventurers to be well-rounded, learning Tactician, Beguiler, Scientist, or Engineer perks to solve harder problems you’ll face in the future. It is basically a standard skill tree that provides extra research or status tokens depending on your method of play. 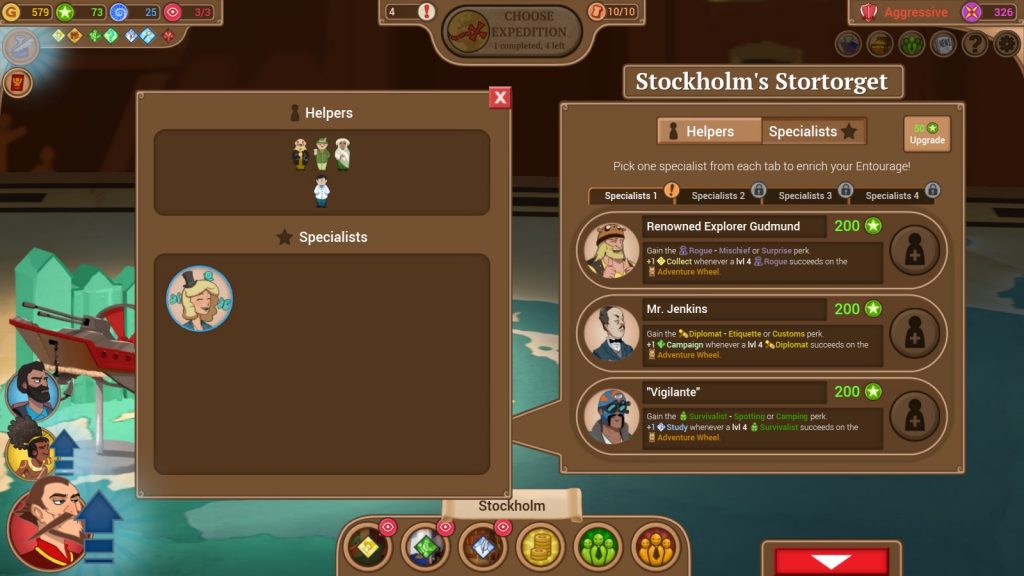 Entourages are just another means to improve your renown. You want to buy as many helpers and specialists as possible to keep up with your rival, Rivaleux. The helpers join your team to give them bonuses on the rewards gained from random events. As for the specialists, they will teach someone a new perk, but cost more status to recruit. 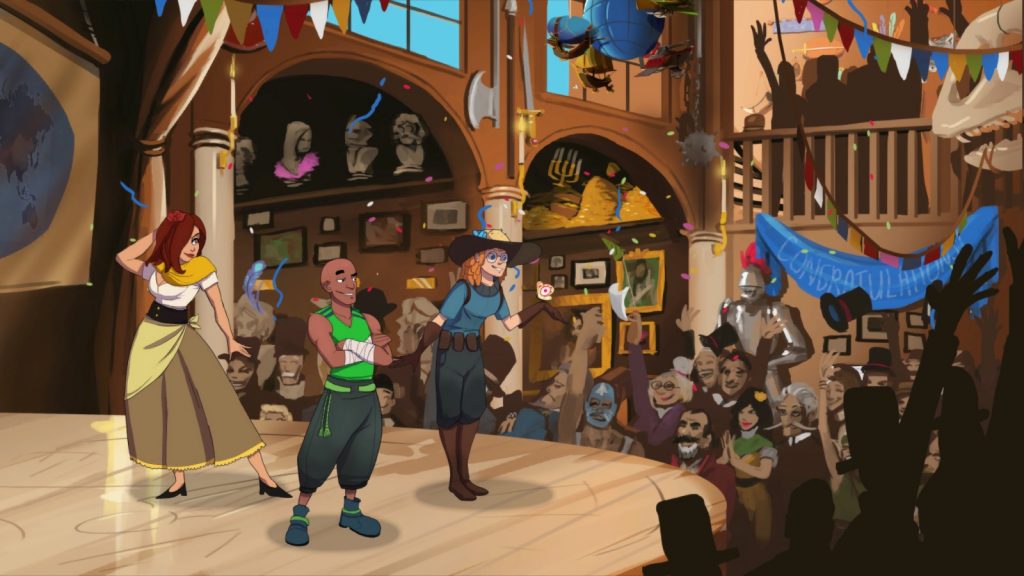 The main point of Renown Explorers is to uncover the hidden treasure at your final destination. Every adventure is made up of several expeditions spread out across different continents. You get to explore the Andes Mountains, the Hungarian Fort, the Emerged Island, Shangri-La, and more! It’s up to you to select which treasures your party will try to retrieve.

At the end of the day, Renown Explorers puts a new twist on classic board games like Monopoly so that instead of just moving your characters to a block and drawing a card, you have a chance to build a long-term strategy that goes beyond a single adventure.