South Park: The Fractured But Whole

Once again, Stan, Kyle, Kenny, and Cartman are back in this sequel to The Stick of Truth. Disguised as their alter-egos: Mysterion, Toolshed, Human Kite, Mosquito, Super Craig, and The Coon, they’re on an epic quest to return a missing cat, in hopes of launching a superhero franchise to become famous. But not everything is as it seems, given this is South Park, which is known for its disturbing twists on pop culture.

WARNING:
South Park: The Fractured but Whole is an extremely mature game full of vulgar humor, sexual content, and horrific violence so be warned, this review may offend people who are uninformed or never watched any South Park episodes.

Now that’s out of the way… 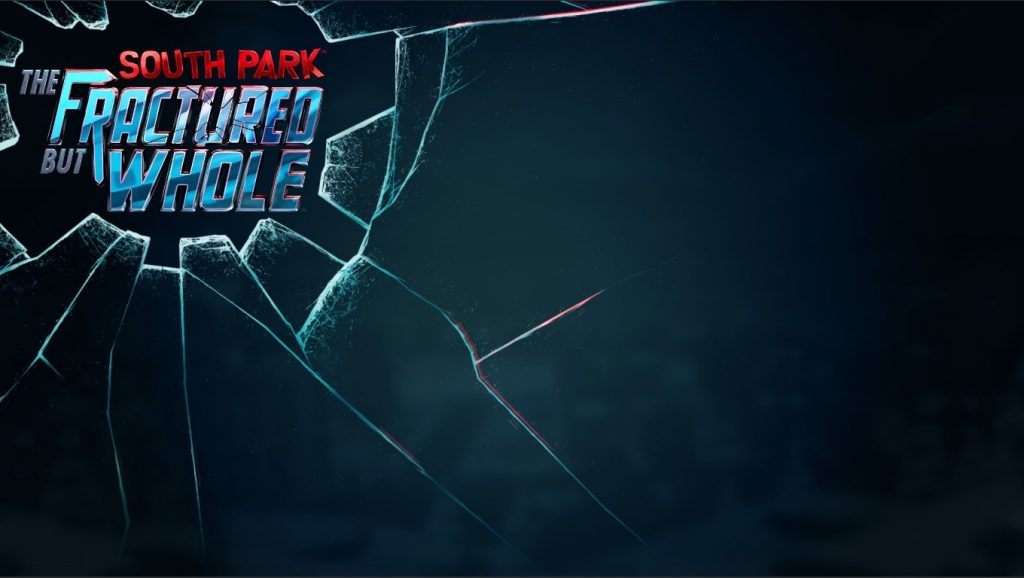 In modern times, when Superhero movies dominated the box office, it would be easy to assume that people may want to invent their own superheroes, scratching the itch for that much-desired vigilante justice. Well for one, Southpark has delivered that experience, riding off the success of their Stick of Truth game.

That being said, it differs from the first game since The Fractured But Whole only references more recent episodes for the most part instead of using jokes from early seasons. Nonetheless, it still has throwbacks from older episodes you’ll recognize if you had watched past World War Zimmerman. 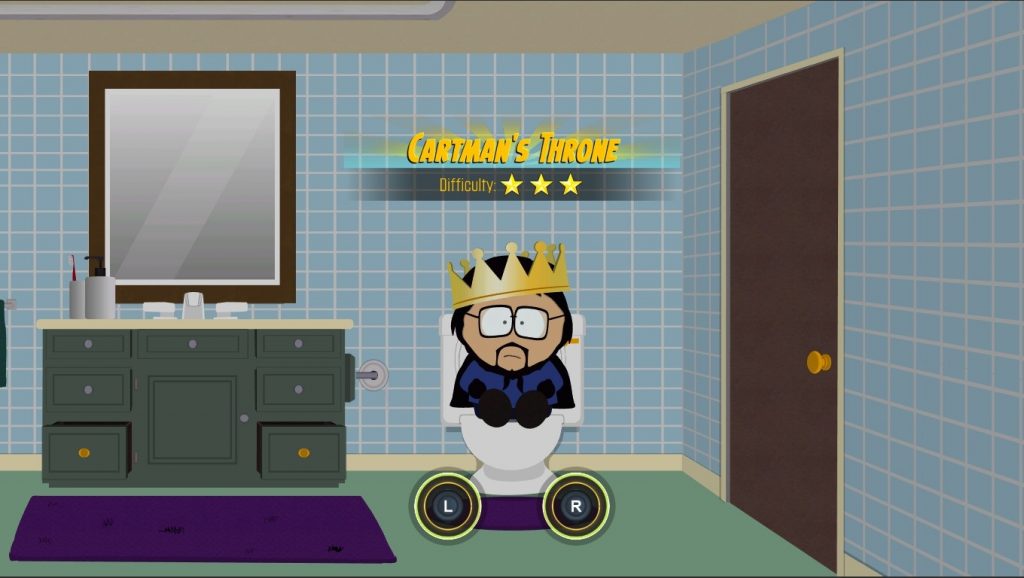 This gem picks up directly after the events of the Stick of truth, as you are the New kid, blessed with the incredible power of earth-shattering farts named the King. After a quick tutorial series of fights defending your corner of the kingdom, Cartman shows up to declare himself the leader.

Or rather, Cartman in a raccoon outfit, calling himself the Coon (Yep, it’s a pun on a racist slang for black people.) He assembles some of the other kids to instead play superheroes, except you are not invited. Determined to join in on the fun, you find your way into the Coon’s Lair. 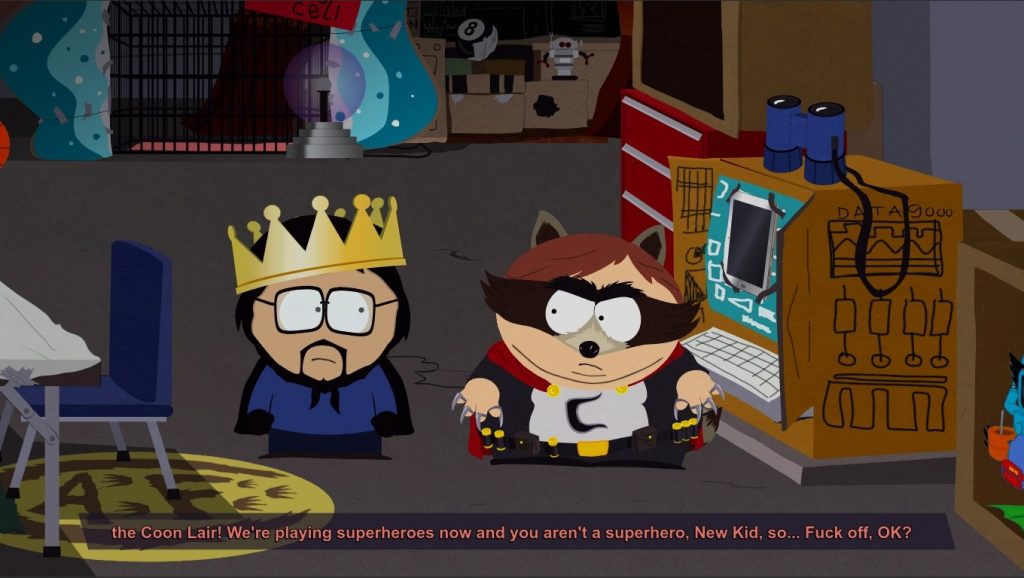 Since the kids are not playing pretend anymore, all the things you did in the first game effectively amounts to nothing, which sucks since it was fun to master all those combo attacks including your ultimate move. Cartman, however, agrees to let you play, but only as a basic hero like the adventurer wielding a longsword.

After you’ve picked out your hero powers, Cartman gives you a tragic backstory, requesting that you play the part. Your backstory is quite sad I can guarantee that. Either way, you learn that the point of your group, The Coon and Friends, is to get rich off of making a superhero movie franchise like X-Men and the Marvel comic books I presume. 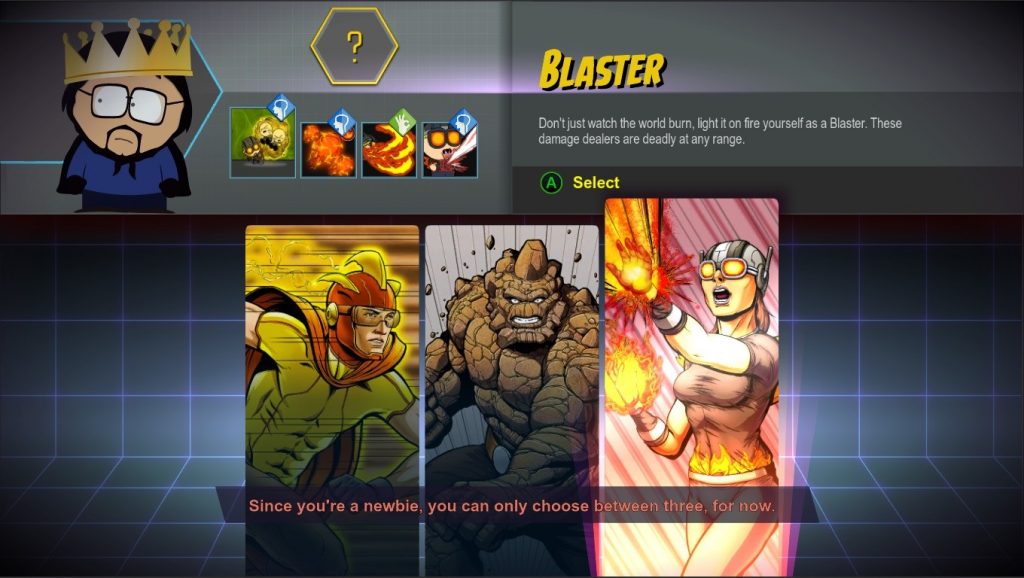 The current mission is about funding their superhero organization with the reward money being for a missing neighborhood cat named Scrambles. Notice how the main cast has powers that pay homage to classic heroes like Wolverine or the Flash. Professor Chaos and Mysterion will also be making a return to test your might.

Throughout the game, you become a friend to many denizens of Southpark and become friends with them on Coonstagram and become a well known Farting Vigilante, ready to battle strict parents, homeless people, strippers, priests, even mutant crabs, pretty much anything that stands in your way. 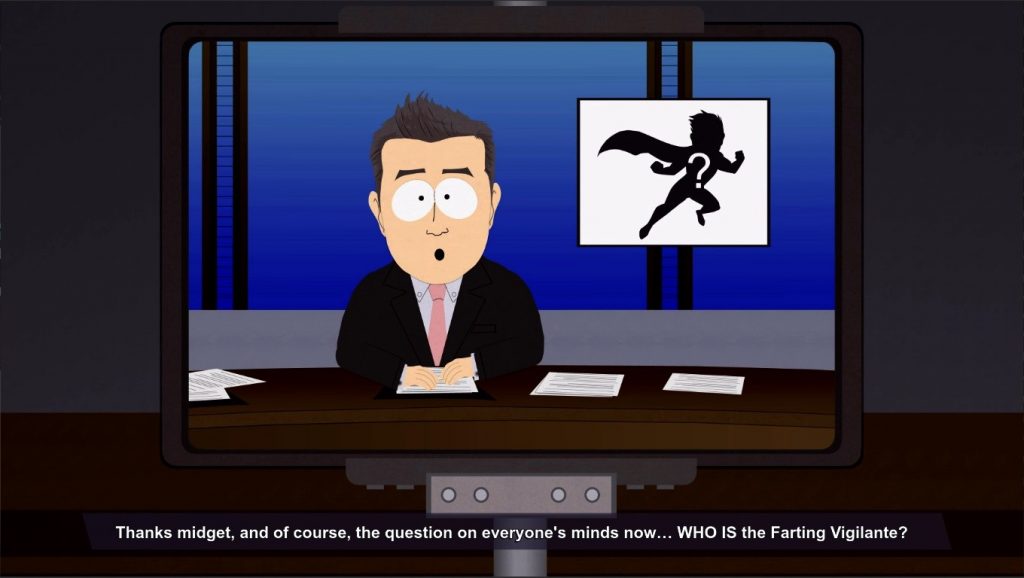 While you run around town looking for the lost cat and help people out, you also must contend with the Freedom Pals; the rest of the kids from Coon and Friends who didn’t like Cartman’s Plan to make a big-time franchise, therefore forming their own rival group.

In your adventures, you will gain new powers to add to your arsenal. Ally with the alter egos of the other kids to invade a strip club, travel through time, take down a weed store, break into a high-security prison, and of course, fight Jared from Subway. 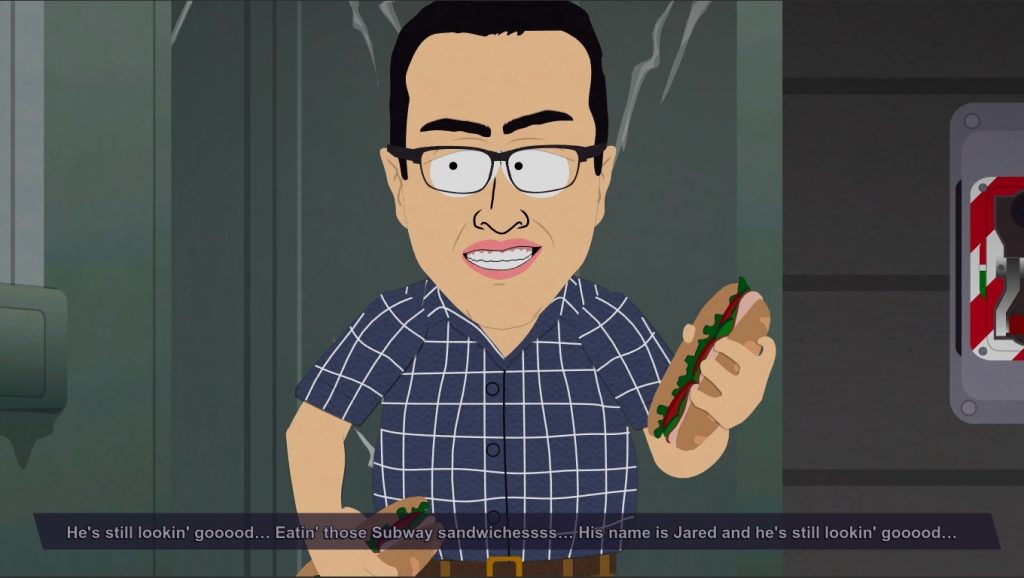 The actual combat in this game has been improved considerably since the Stick of Truth. Rather than adopting the style of a simple turn-based RPG, Fractured But Whole instead functions much like a grid-based strategy RPG in which the cards are laid out on either side to show who’s on your team and what attacks they have available. 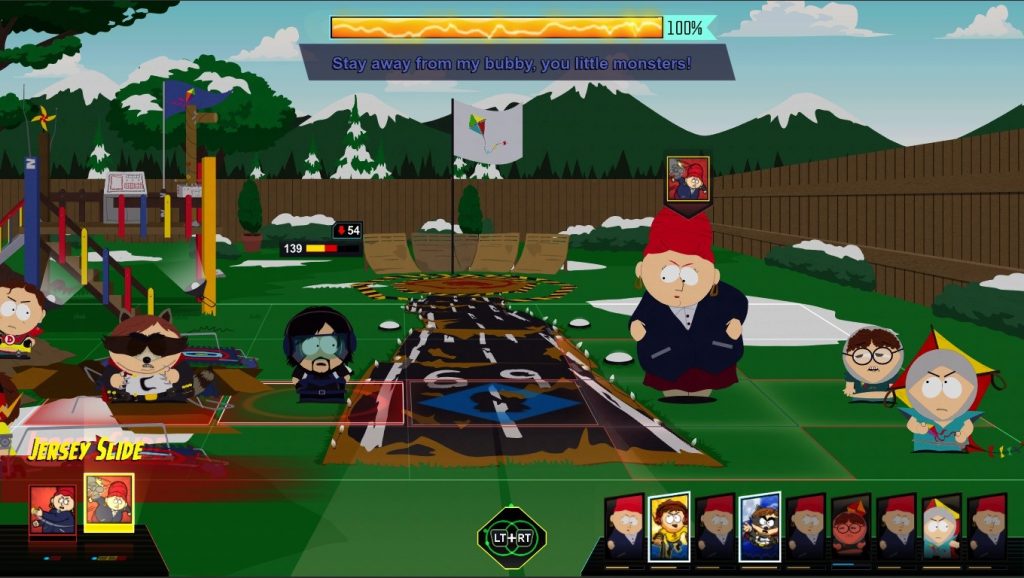 Moving around the battlefield becomes vital and adds a huge layer of depth to the fights, but that’s not all. In the first game, you always had a single ally aiding you in combat. But in this game, up to 3 of the local kids can support you using their superhero persona. Some have higher defense while others focus on backup heals. 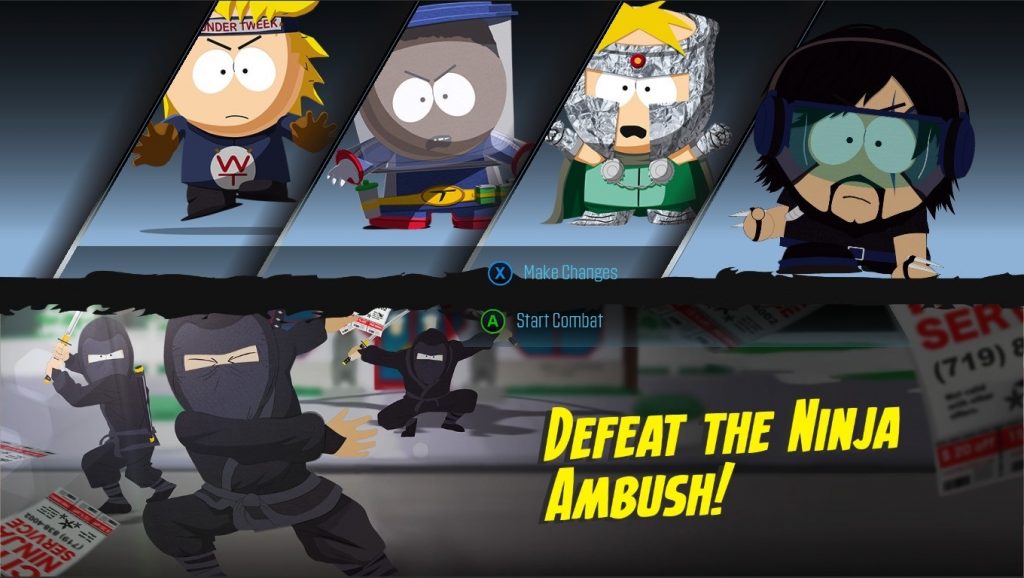 There are eventually 12 other children who can come to your aid, giving you many options for building a team. Along the way, as you level up, you will gain artifacts to equip that can boost your attributes thereby give you new passive abilities like reducing the amount of damage you take.

On top of that, there are two other elements of note in the game. Each kid including you has an ultimate attack they can unleash. Your ultimate attack and other moves for that matter can be changed out as you progress in the game to customize your moveset. You are given more freedom in building your character since you can level up by wearing various costumes. 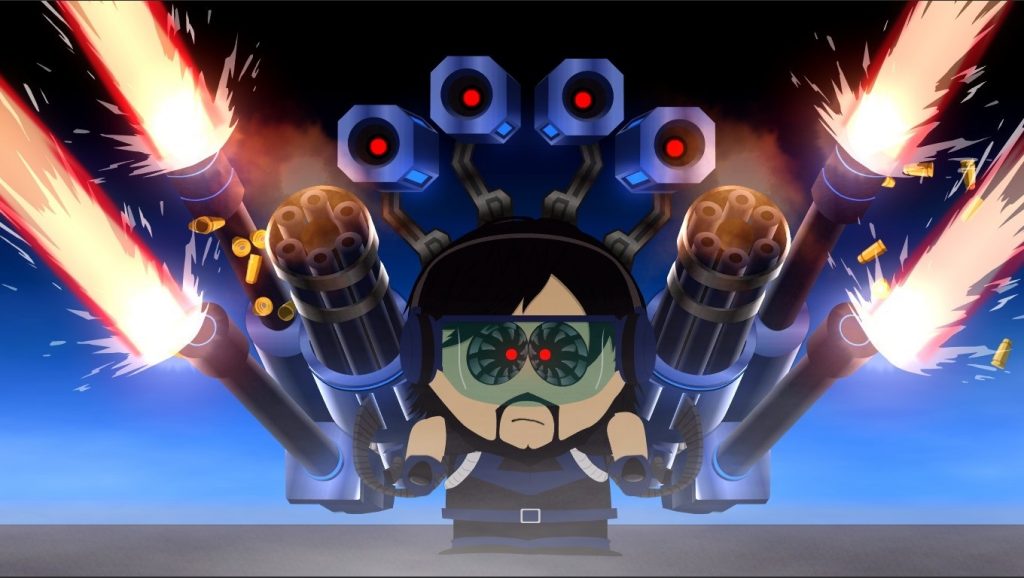 The last noteworthy combat mechanic goes back to the first game. Your character can harness the power of their dire farts to rip holes in the space-time continuum thanks to the mentorship of Morgan Freeman. You are free to screw with the turn order and skip enemy turns at will by letting loose your powers to give your team an edge. 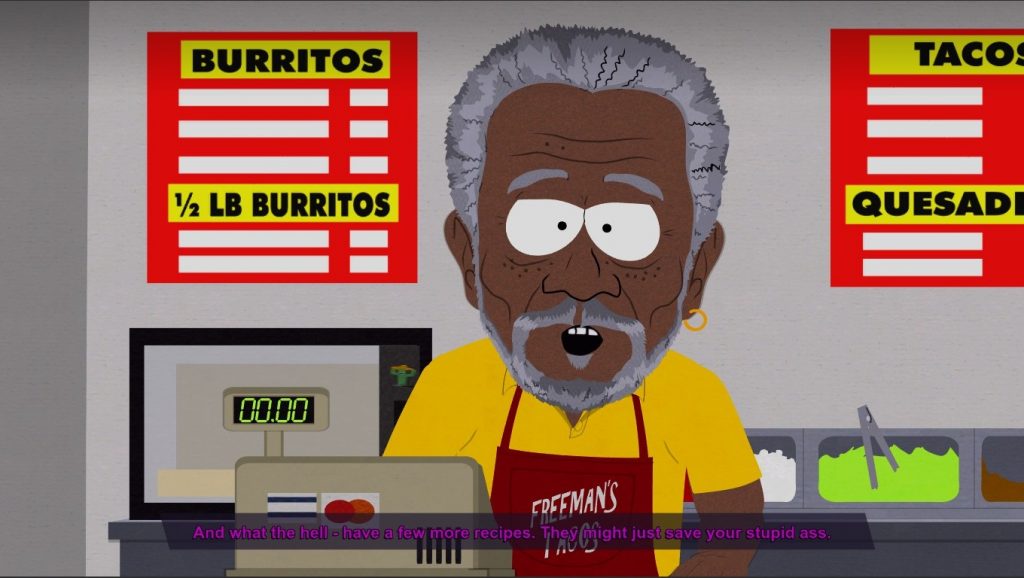 Outside of battle, there are some areas that you won’t be able to progress through. Moreover, like in the first game, you eventually gain the ability to bypass these blocks using the powers of the other children. This time around, the collectibles have been toned down, so they’re much easier to find.

Throughout the town, you’ll see Japanese art depicting Tweek and Craig’s Gay relationship referred to as the artform of Yaoi. You can collect all 40 of these pieces for Craig’s father. They are well hidden in some spots, but all are still accessible even in the endgame. 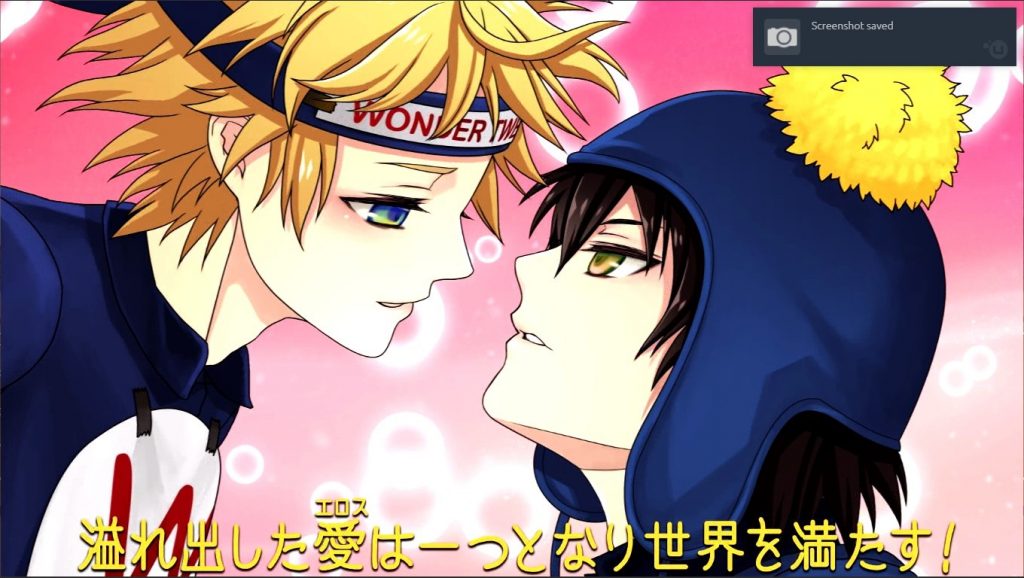 If you recall that episode, the fact that they took actual fanart is comedy gold. Also, the Let’s Fighting Love theme is back. Speaking of that, the creators have done well in making the game rather easy to 100%, with only one missable achievement. For those of you who care about the missable achievement, you just have to beat the game as a black character on the highest difficulty. (Racial discrimination = hard mode?) 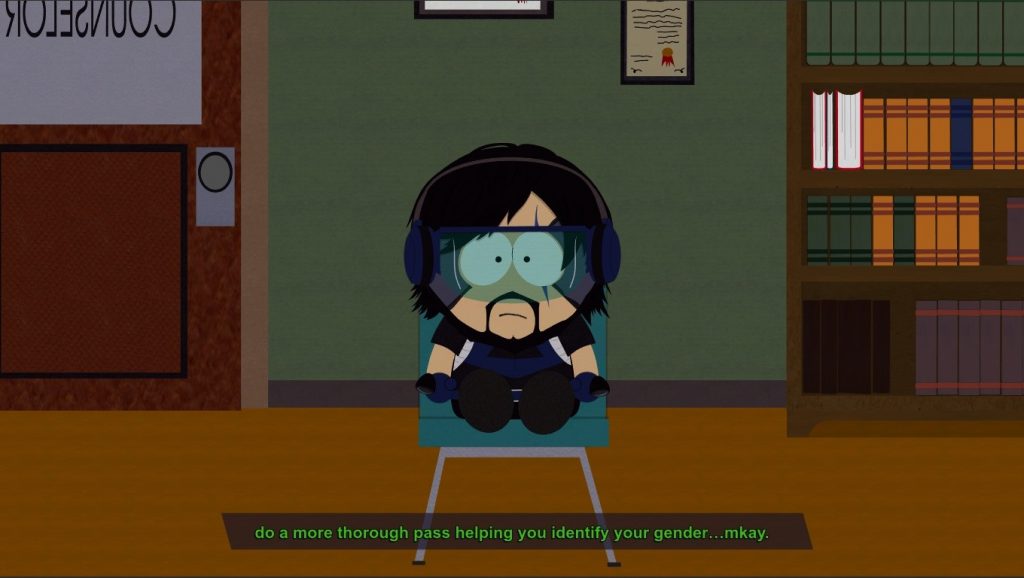 Character customization is possibly the most important element within this game. First of all, your base character can have their skin color determine the difficulty level outside of combat. Also, you get to customize or choose what your gender is in a rather modern understanding of genders by meeting with Mister Mackie.

Over the course of the game, you get to custom other aspects such as your religion, your weakness (every superhero has one), and your economic level, which is determined by playing a minigame. It is somewhat luck-based since they require you to spin a wheel. Later on, you could aim to “master the toilet” minigame by charging your fart power…literally. 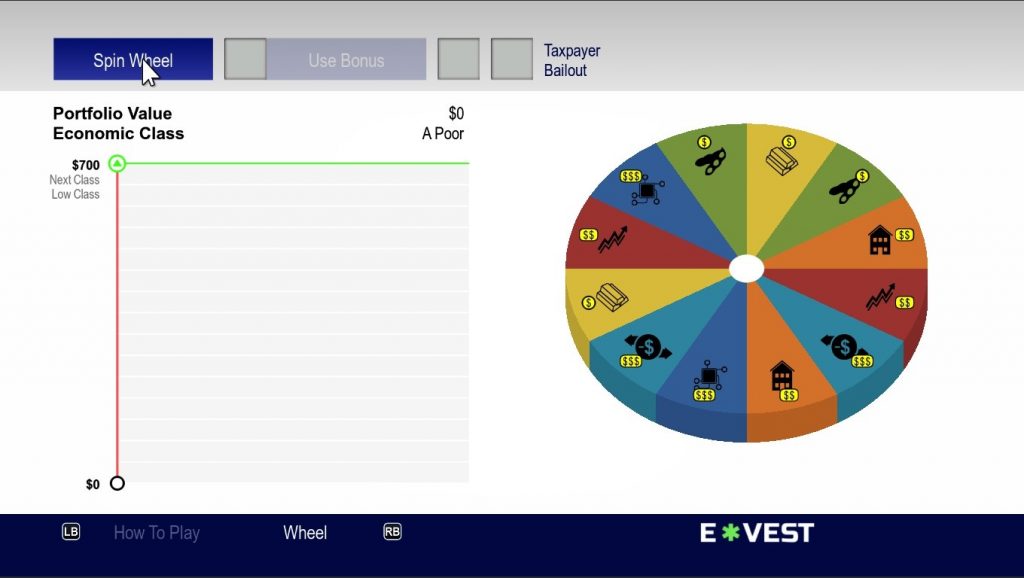 Next, the costumes you wear no longer dictate your stats, and so you are free to make your superhero look like whatever you wish without any unwanted penalties. You can gain many of these costumes via buying them or crafting them with the crafting system.

Final Thoughts on Fractured But Whole

To be honest, I enjoyed this game much more than I did the first one, especially due to the depth the developers added to the combat and the notably improved customization options. These two made the game much more tolerable than the repetitive and limited options provided by the first one.

I’d say the story is about on par from The Stick of Truth, but since I enjoyed the ridiculously convoluted plot so much last time, I was still plenty satisfied. I would actually say that the story would be a lot better if it didn’t fall all over itself near the end, which I won’t spoil for you.

Whereas I claimed that the first game was really only fulfilling for fans of the series, this game isn’t quite the same, I feel while a fan would get more enjoyment out of the offensive jokes, a new person would still be able to get invested in the combat itself.