Developer: Klei Entertainment
Publisher: Same as above
Released on May 12, 2015

Many kids like to pretend they are secret agent spies who can waltz straight into an enemy base and fool the guards into believing that they saw nothing in the first place. While becoming a real spy may take years of training unlike what happens in the movie, Spy Kids, the game Invisible, Inc. turns this fantasy into reality with a simple download off of Steam. 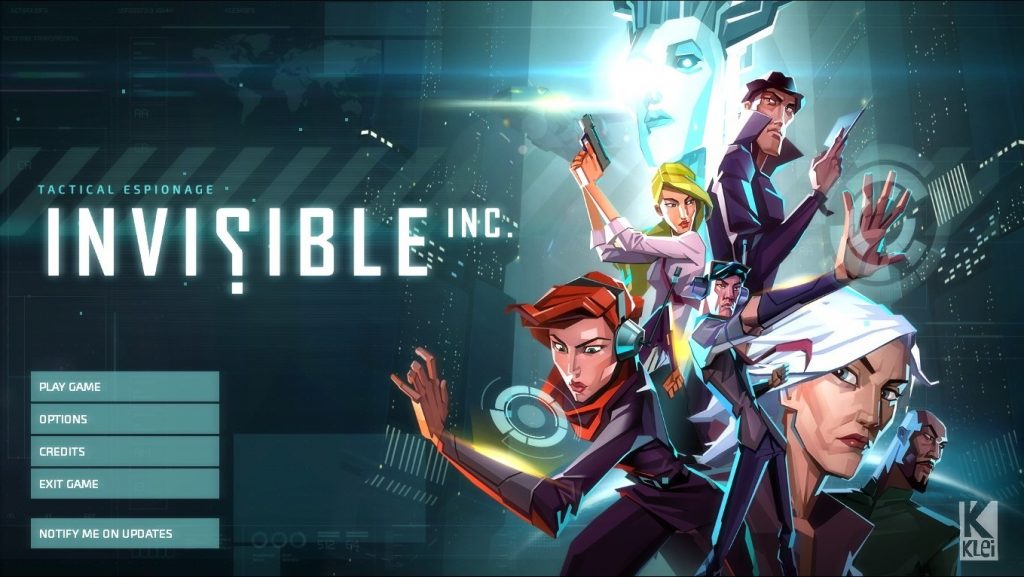 Invisible, Inc-Time to Strike Back

This game (X-Com, Splinter Cell, anyone?) takes place in the distant future of 2074 where giant corporations effectively rule the world. Amidst this corrupt society, is a secret mercenary group known as Invisible, which specializes in covertly infiltrating and performing tasks for the highest bidder. You’re on the right track if you think of bounty hunters, but with the same playstyle as Metal Gear Solid. 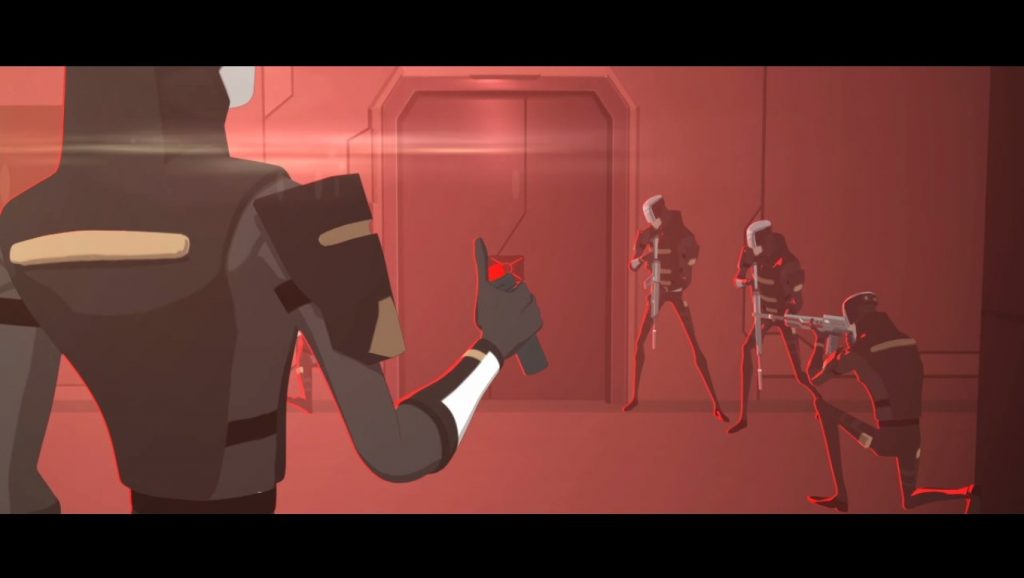 At the start of Invisible Inc, the Corps have had enough of Invisible and contact paramilitary raiders to take down their operations HQ, causing 5 members of Invisible to outright leave. The first agent is Olivia Gladstone, the business “Central” head of the invisible agency. Next up, are two highly-trained Operatives who were out in the field at the time of the attack.

Then, there’s the Invisible AI Program, Incognita, made to contend with the technical difficulties that Agents face during an infiltration. The last person is you, The Operator, trained to coordinate agents in the field to ensure their success at completing missions, rewarding them with upgrades, before your team has to launch a counterattack.

To decide on which agents to employ, here is a list of the agents and their abilities as a hacker, sharpshooter, engineer, or infiltrator. Now with the help of a black market merchant with the callsign Monst3r, you need to survive without your agency, stealing from the corps and trying to find out who took your group down, possibly a traitor on the team or someone from the Corp itself.

The Mechanics Side of Invisible, Inc 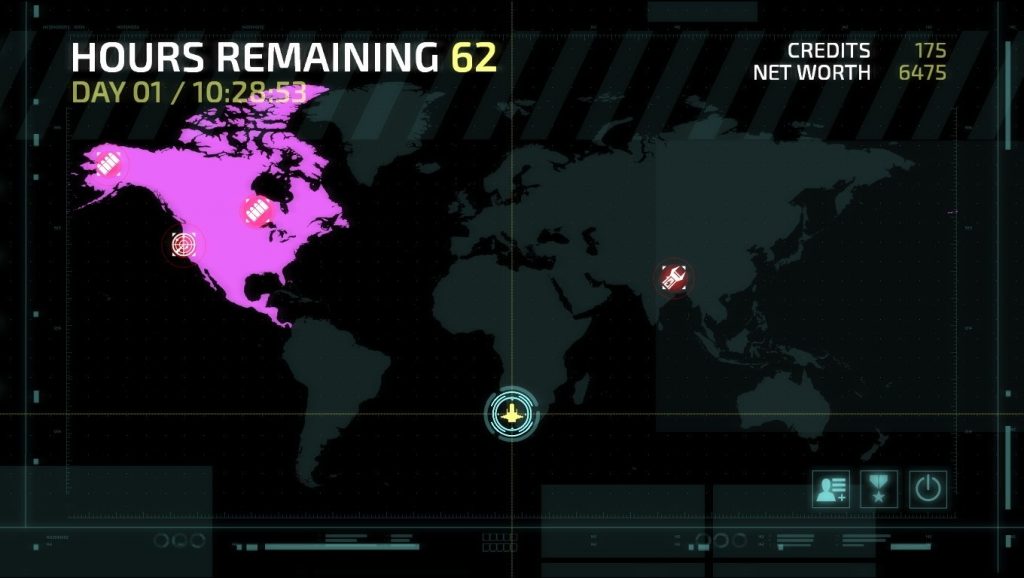 With Invisible’s future in your hands, you are only given 72 hours to gather resources and new gear to keep your agency running. You will be notified of what you can expect to gain from each mission site, and which enemies you will be expected to face once you touch down. Your objectives are carried out through turn-based combat.

Once the choice is made, your agents will strike the other group in one of the site’s empty rooms. The game then executes your planned strategic maneuvers, but unlike the typical kind, this one focuses on stealth. Your agents must avoid the security cameras, hack computer terminals, knock-out unsuspecting guards, or destroy armed robots. 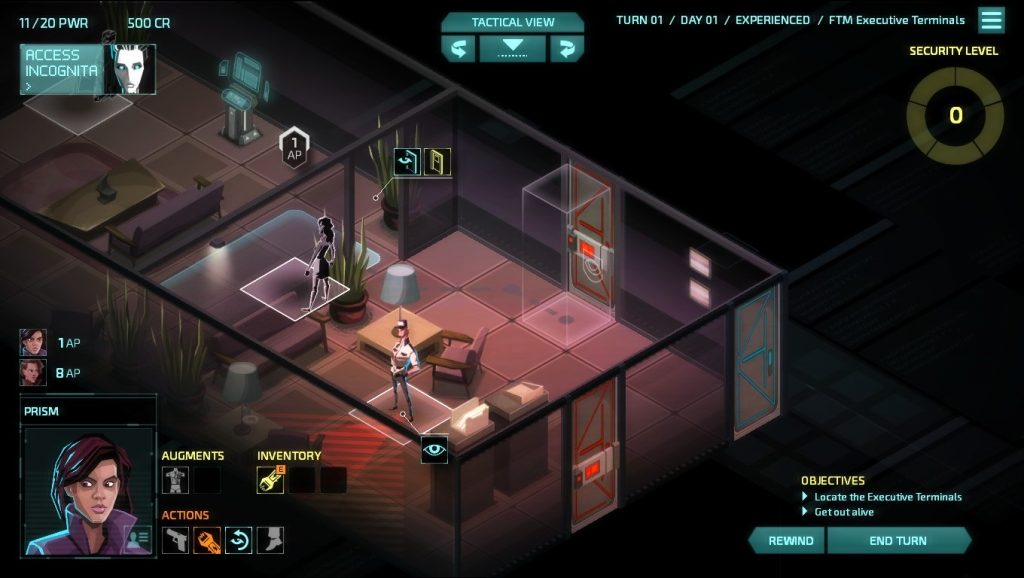 Your agents will make use of the guard’s patrol routes, their limited line of sight, and their strict orders to react only upon discovering you. Since you have the advantage of being unseen it can be rather easy to work your way through the complex, hopefully undetected. The guards won’t be expecting you until the alarm is sounded.

The number of working variables that the company Klei have put into the game is simple to pick up at first, but slowly and surely, they adapt as the game goes on to become much harder. You’ll have to keep up with the pace once things escalate; more alarms are placed near hacking terminals and the guards wake up sooner. 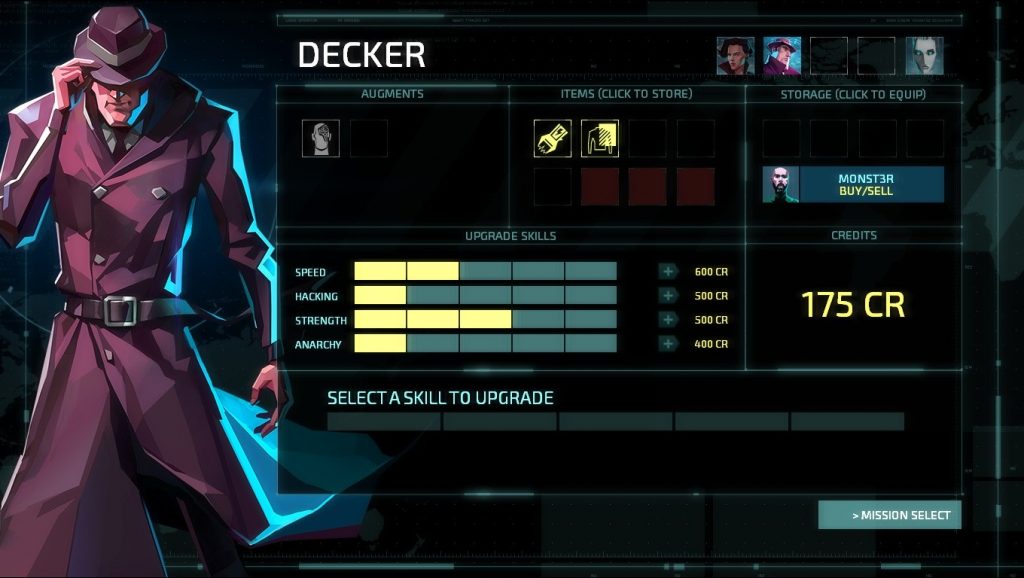 After each mission, you will have the opportunity to use credits to help upgrade your agents in 4 ways: Speed, Hacking, Strength, and Anarchy, aka the ability to steal from the Corps. If you keep your Agents well-built then their ability to survive will improve, but that isn’t the only way to upgrade your skills. 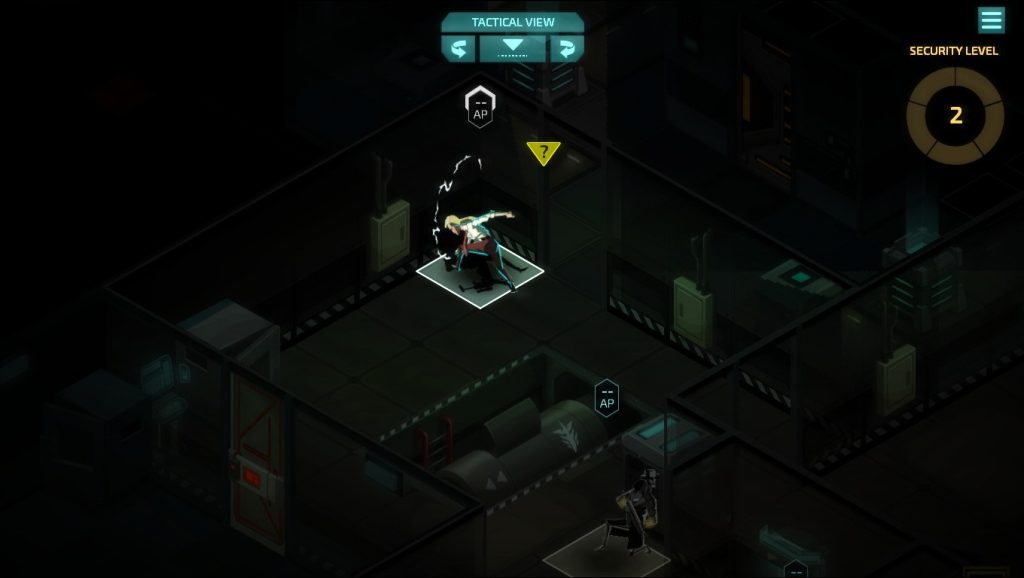 In order to have your agents fight, they will need tools beyond just their basic stun guns. Through Monst3r, the Kiosks in the Corps, or just outright stealing from the Corps, your Agents will acquire new weapons, tools, and other kinds of equipment. This is all done inside a grid map layout as every block counts a single move.

On top of those tools, you’ll also be able to upgrade your comrades in the Incognita computers. At the beginning, you have a program to hack obstacles, and another program to regain power. With these, you can unlock Corp tools in the field to get an edge over the guards and proceed past obstacles like the cybernetics-enhanced goons. 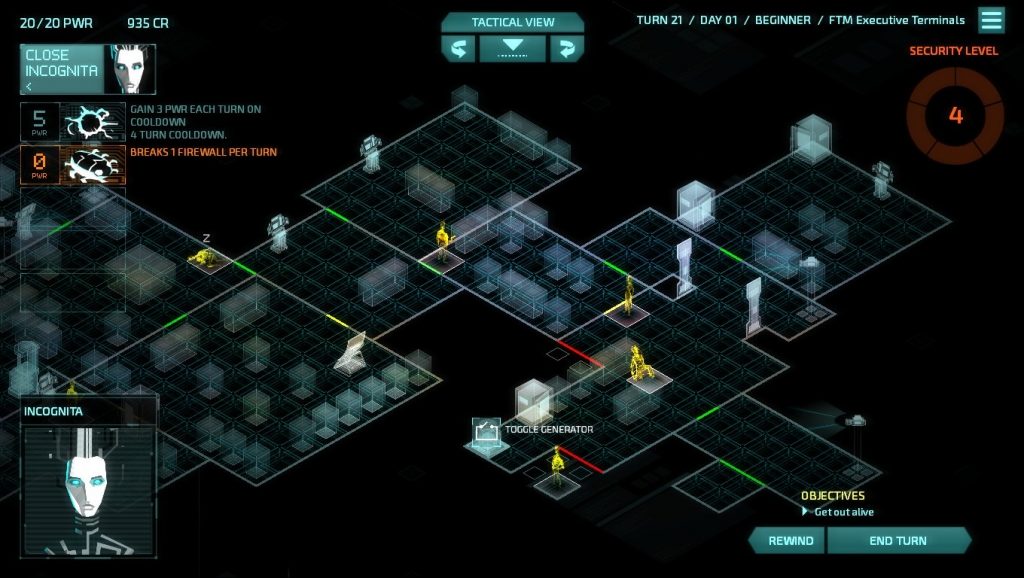 By the way, the animation and agent designs are top-notch, which is a shame when you don’t really get to know them beyond their files. But the short campaigns do make you feel like they are an elaborate series of events that you can execute perfectly to get away without ever being spotted. But it isn’t always easy to see the choices you need to make for the best outcome to happen. 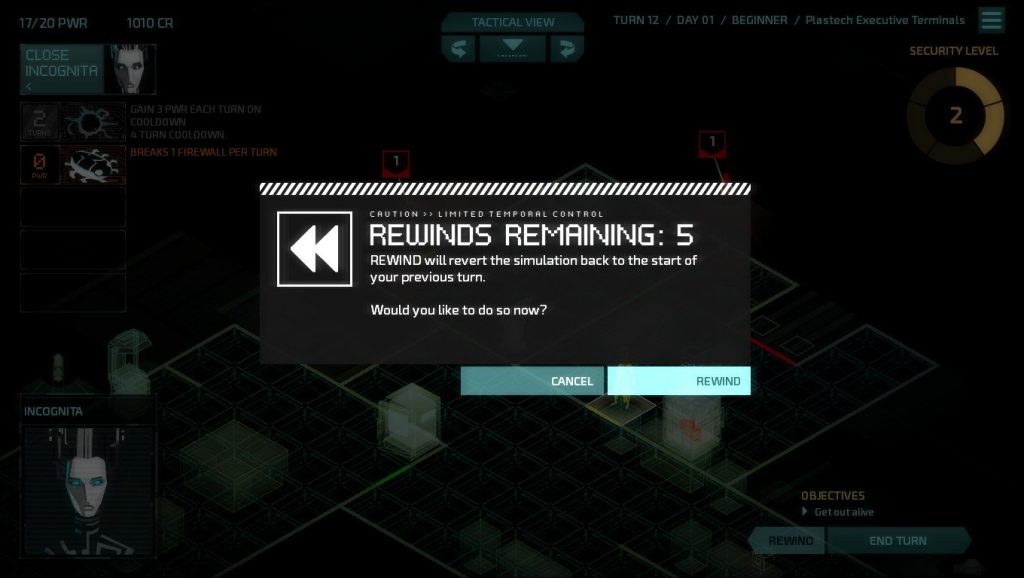 You have a few chances to rewind the turn and erase a dire mistake you made in a previous turn to prevent the goons from destroying your planned infiltration route. Here, I’ve passed off that mistake as the operator planning ahead in a simulation, but then opting for a new course of action. It’s crucial that you know how to set up an ambush or open a door to a new area.

It is inevitable that your agency will eventually fall meaning your team runs out of options. You have many opportunities to earn some credits or power, do reruns of missions, and also learn to conserve your action points. Every time you finish running a new agency, your agents are rewarded with experience points to unlock new starting Agents and activate more Incognita Programs. 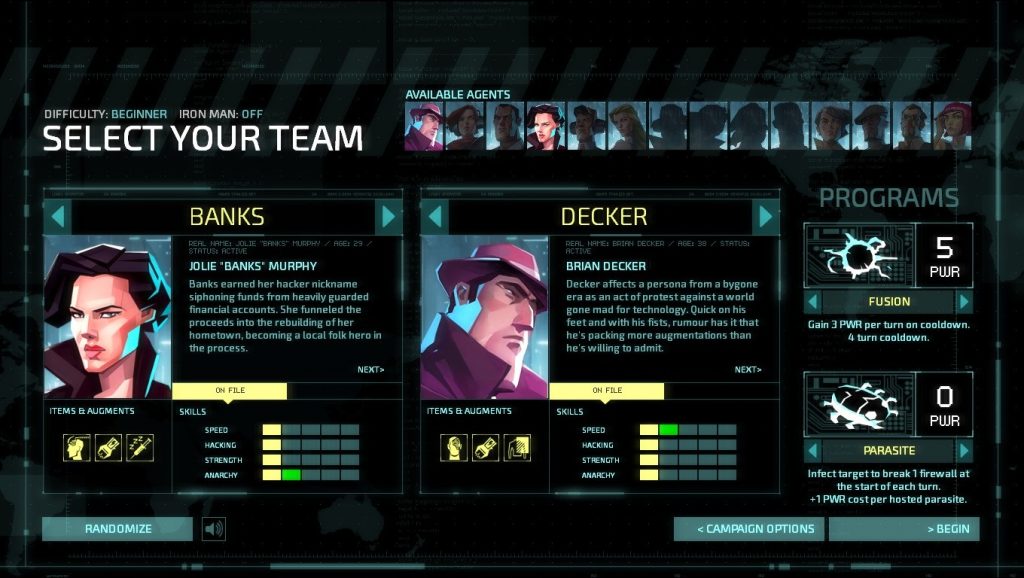 On your first playthrough, you are allowed only two agents. The others are locked until you complete campaigns, accumulate enough XP from missions, or beat the game in hard mode. As a matter of fact, a new agency can be entirely different if you look at the programs each agent specializes in. They could have abilities like Gain 5 Power, Scan Electronics, or automatically unlock security doors. 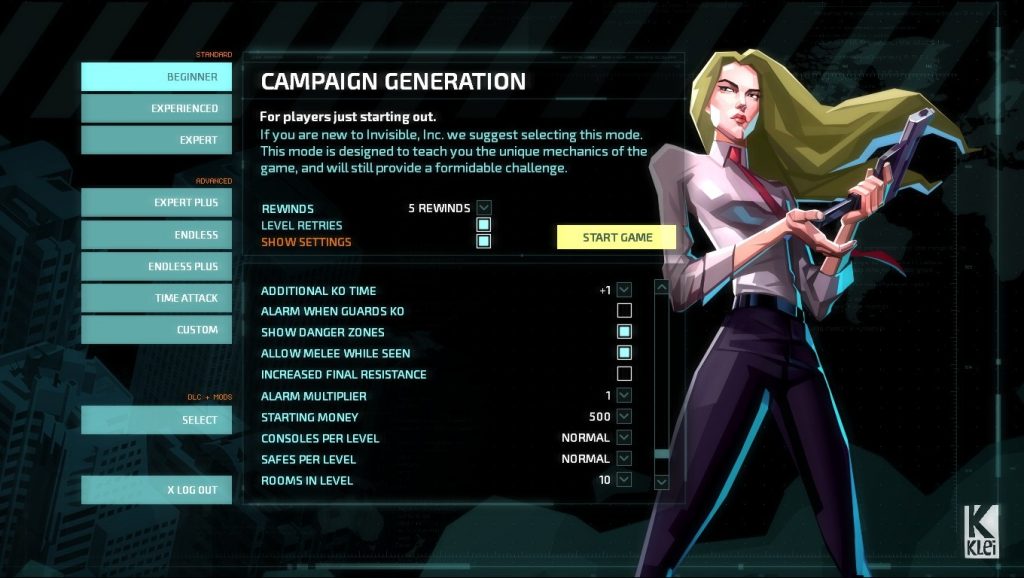 Customizing Your Team of Spies

When making a new game, you are not only able to choose new agents and programs, but you are also given the freedom to custom tailor how difficult you want the campaigns to be. Invisible, Inc does this to increase its replayability value. It honestly feels great to be able to play a game with a list of checkbox tweaks beyond picking one of three difficulty settings.

But that isn’t all. Like some of the other games we’ve reviewed here Invisible, Inc. allows for Mods via the steam workshop. These can be as integrating as changing mission mechanics, reskinning agents and maps, or even creating entirely new agents to experiment with. 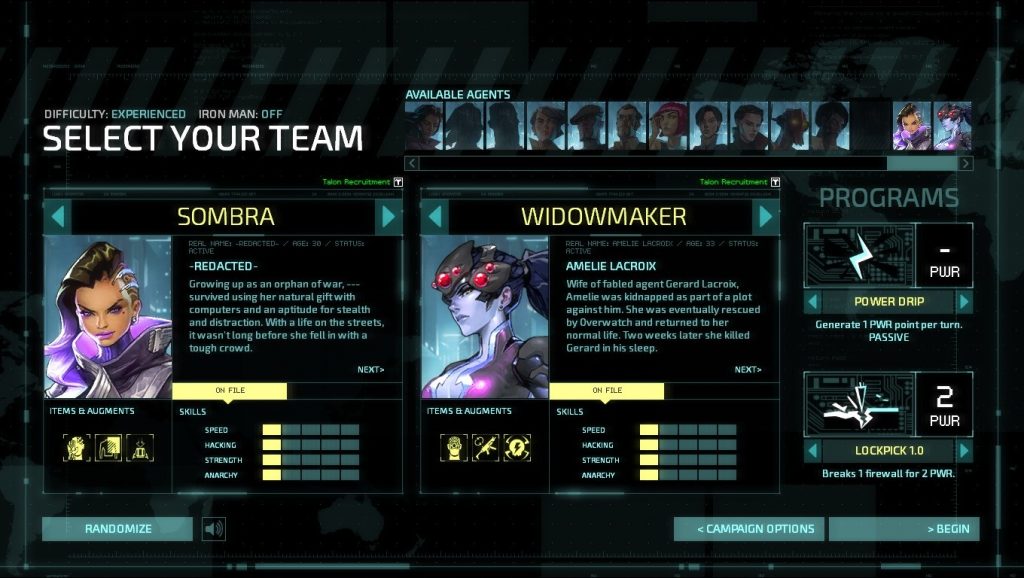 That being said, unfortunately, with the many diverse options for agents and how much work is put into their backstories, it’s kind of a shame these guys aren’t given the chance to have dialogue. They may have unique personalities, however, they stay almost silent during a mission, not interacting with their teammates.

To Wrap Things Up

I will say that I enjoyed the game overall. It is personally my favorite kind of rogue-like RPG and serves as a stellar strategy game. This is on top of a sleek, unique animation style and a responsive AI within a randomly generated game. Selecting each block on the field, lets you see what enemies are doing, where corporate safes are, the level of security, and so forth.

While it does have a roguelike progression, the individual agencies you can operate still take a long time to develop, taking up several hours which sucks if you fail a campaign and have to start from scratch. The game is still good because you get to infiltrate top secret buildings including a bunch of cybernetics labs, security dispatch areas, and executive terminals.