Ever heard of Steam Greenlight? It is the central hub of game development on Steam. Every year, the community votes on games they believe deserve to be released on Steam.

Developers put up their screenshots and trailers for the public to see and receive feedback from fellow gamers who would want to buy them. It’s the best invention to let both parties communicate.

As an independent developer, you have the opportunity to showcase one of your best works and have it gain support from community members. Maybe you are genuinely interested in trying your hand at creating a video game from scratch. And once you have enough positive votes, there is a chance your game will be Greenlit.

Of course, if you aren’t an experienced game designer, you could instead opt to submit your own software: Steam accepts a large number of animation, audio, photo editing, and video production programs that are non-gaming related. I suppose that explains the GameMaker Studio 2 software being sold at the Steam store.

(On a side note, I have no idea why they came up with the name Greenlight.) But since 2011, we were given the privilege to choose which games will be distributed on Steam’s platform since we are also their customer base. Greenlight is intended to encourage more creative and quality submissions from indie developers. 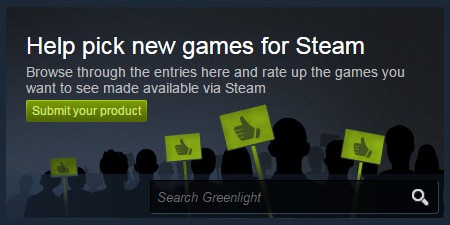 How to Participate in Steam Greenlight

Steam Greenlight is similar to contests you’ve seen before. Your main requirements to be eligible for Greenlight are to one, own a Steam account. Two, set up your game so it works. And three, fill out the submission form. You will be asked to pay a one-time (Thank God it’s not per game!) fee of $100 as a charity donation to Child’s Play.

What you’ll need is at least one video showing gameplay, a minimum of four screenshots, a well-written description of the game, system requirements, and last but not least, a game cover title to display your brand. An attractive intro page is a golden ticket to your success as an indie developer.

Although I personally don’t think this is the best way to weed out trolls or spammers, Steam insists that people who pay to submit games are less likely to overrun them with crappy games. To err on the safe side, I don’t recommend submitting anything that could be perceived as offensive unless you don’t care about being banned.

Now restrictions aside, you are allowed to send in an unlimited number of your created games though they must be able to run on Windows, Mac, or Linux. Steam permits you to tweak your entry or make updates that are deemed necessary prior to its release date.

Here are the other rules I dug up on Steam Greenlight:

You can sign-up either as an individual or a company to profit off of your Greenlit game.

Your game should run as a stand-alone application NOT launched in a web browser.

You are allowed to submit mods or other DLC as long as you’ve obtained a source engine license.

Once you’ve set your game to be visible to the public, you should be good to go. Just leave it alone and wait for the votes to arrive!

As a friendly reminder, I would suggest you read any comments or feedback people give and respond to any questions they ask to show that you actually care about your fans. This should boost your presence on Steam Greenlight over other contestants.

If you are particularly anxious about the result, I don’t blame you, they are hard to predict. In order to garner more votes, you’ll have to learn how to market your game. However, that doesn’t mean you should bribe people with copies of your game for positive votes.

Instead, I advise you to begin sharing your conceptual ideas with the community. Work alongside your fans, fine-tune it as you go. Post updates frequently on milestones you’ve achieved, especially tidbits of gameplay footage! And make sure your videos are straight to the point, exceeding expectations of gamers passing by.

It’s true that Steam has low barriers to entry. A lot of developers are pretty lazy, mass producing games with minimal effort. And they are rightfully down-voted into oblivion. But I don’t think you’ll have to deal with that if you work hard and listen to feedback.

I can’t deny that gamers are among the harshest critics, swearing in the comments, holding elitist beliefs about their skills. And that’s probably why I’m not a game developer (Thank God!).

But as long as you have tough skin and are determined enough to build your own video game from the bottom up, I don’t see why you wouldn’t be successful at it.

Is Steam Greenlight something you want to participate in? Share your opinion in the comments below.

2 thoughts on “How to submit your game to Steam Greenlight”