You know the feeling you get when you’re a huge fan of an anime series so naturally, you’re excited to own a copy of the spin-off game? And yet, the game has many shortcomings leaving you ultimately disappointed? Most of the DB fans felt the same when they came across Dragon Ball Xenoverse.

Disclaimer: Going into this review, I assume you guys have a good understanding of the Dragon Ball universe.

This was probably the biggest selling point of the game, the chance to make your own Dragon Ball character. And to be fair, they didn’t screw up the appearances of the different races, such as the fact that Namekians and Frost Demons only have one gender. 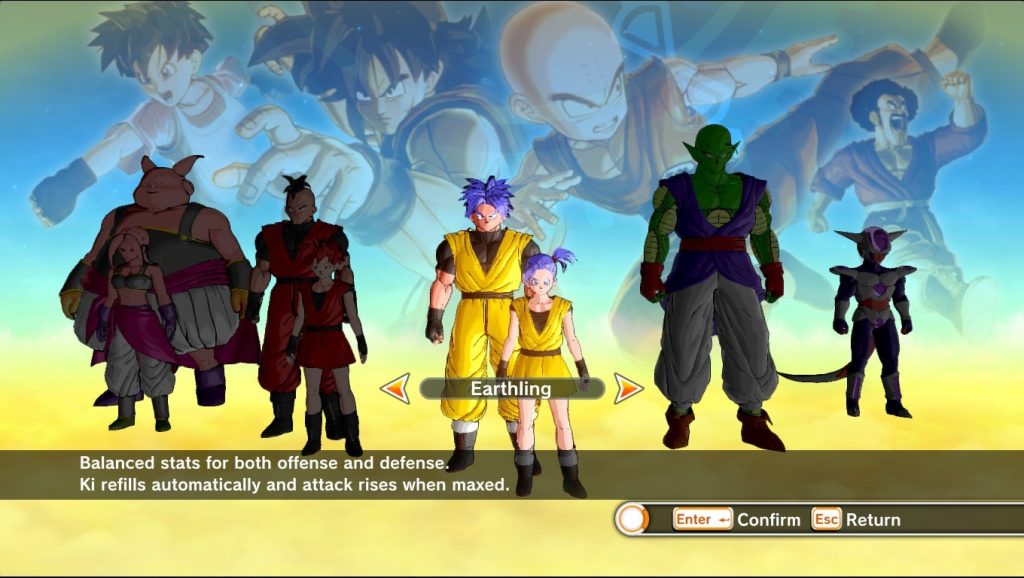 On top of that, the minor character differences between the races are accurate just like in the DB anime. The humans are balanced, the Saiyans are attack focused, and the Namekians are health and stamina based, and so forth.

I do wish they let you choose transformation forms for the Frost Demon and Majin races, but that isn’t really a deal breaker. My real beef was with the most powerful transformations which are limited solely to the Saiyan races.

As far as making your characters, the rest of the builds give plenty of options from the series and is perfectly fine. 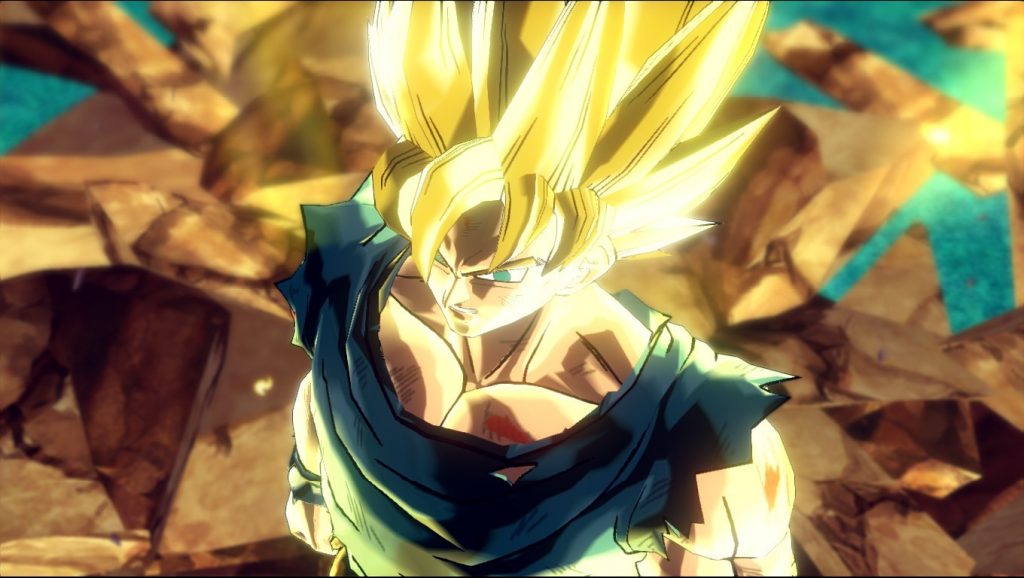 The Story of the Future Trunks Saga

As far as I’m concerned, the story behind Xenoverse is the main reason why you should play this game as its main redeeming quality, but this is only if you’re already a fan of the series, newcomers will have no idea what’s going on. 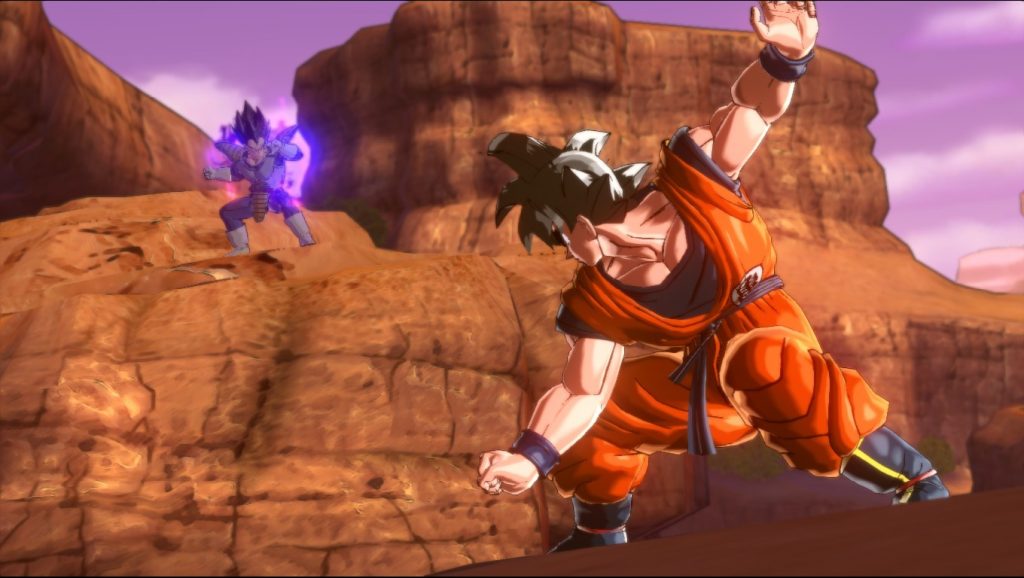 This time, an unknown villain is influencing the historical moments from the show with some kind of dark purple possession magic that boosts power and alters the mind, forcing the Heroes of Dragon Ball to lose the fights they were meant to win in the original show.

Far into the future, Trunks is a member of Time Patrol, a group dedicated to preserving the history of Dragon Ball. Knowing that he can’t fix the timeline alone, Trunks collects the Dragonballs to wish for a warrior to help him prevent this catastrophe. And that’s where you get to join the party.

(Author’s Note: The screenshots for this review has a Dragon ball avatar of this blog’s Creator, aka my girlfriend Wenxi) 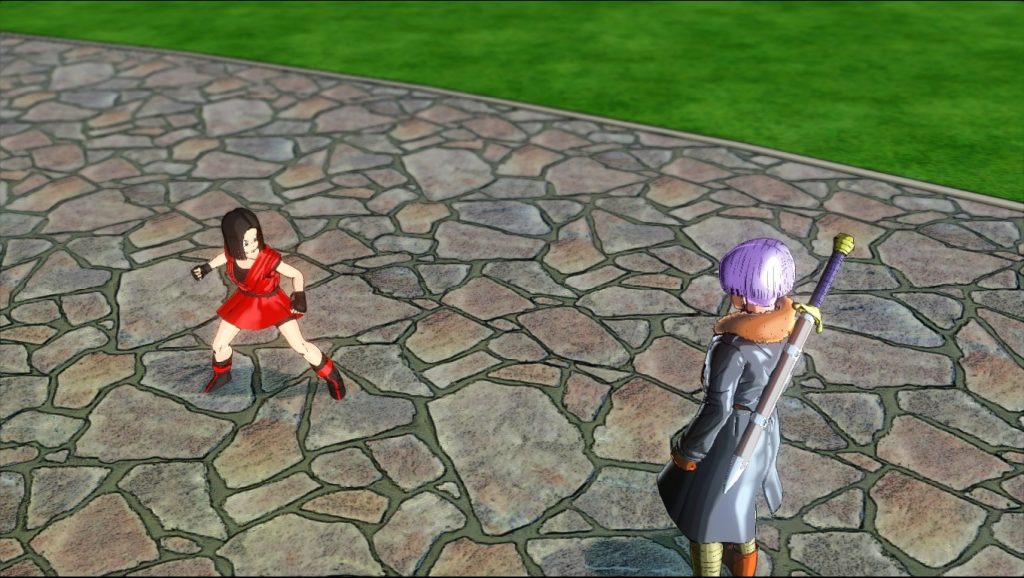 For the most part, the rest of the story involves you being sent to every corner of the Dragonball timeline and becoming a vital player that counters the dark power trying to change history. You’ll join in scenarios like when Raditz avoided Gohan’s Critical hit that led to his death, and you coming in to damage him enough to have Piccolo finish him off. 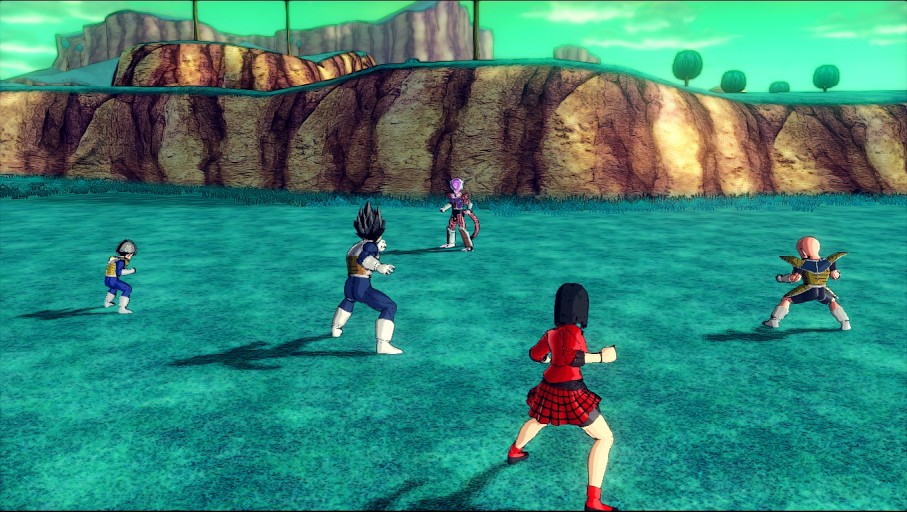 Some situations can be intense for any fan of Dragon Ball, for instance, when Mr. Satan is possessed after fighting Cell and turns against you, becoming a dangerous opponent to face against.

On your journey, you will be assisted by Trunks and a new character, the Supreme Kai of Time, an Immortal Watcher of the timeline, not to mention leader of the Time Patrol. 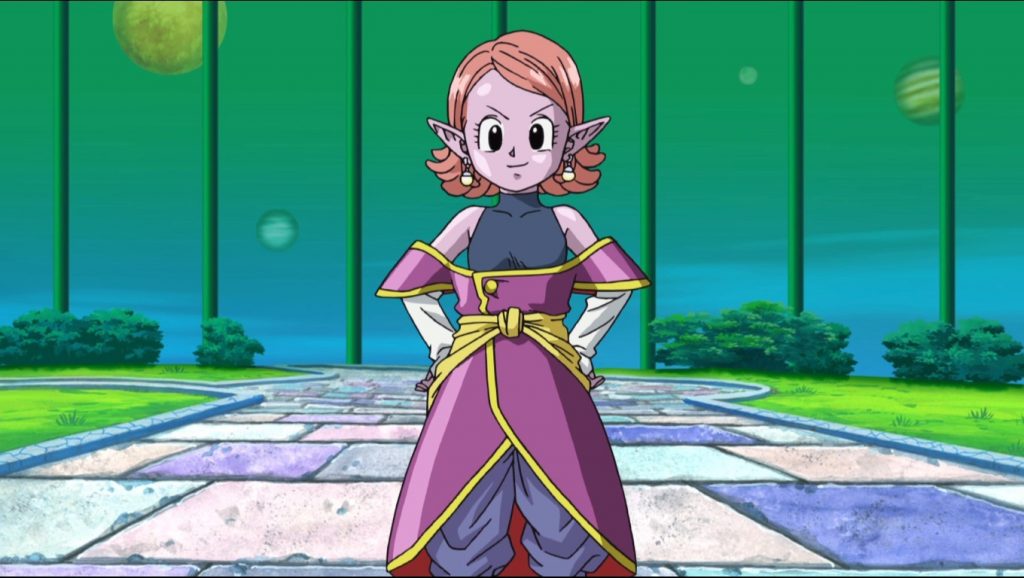 After some time investigating, you uncover that the culprits behind the time attacks are Towa and Mira, demon villains carried over from the defunct Dragonball online. Likewise, an old enemy of the Supreme Kai of Time, Demigra, the Demon God decides to finally show his face.

I loved the overall plot of DB Xenoverse. The only real problem is that new characters will need to re-experience the story by selecting among the old missions rather than getting their own story mode.

Being able to add a personal character to the DB history is without a doubt the best part of this game, as well as one of the last few good things I will say about it.

Depending on the race you choose, your character is given a basic combo system along with a small list of simple commands to fight; flight control, light hits, heavy hits or ki blasts. The combat is easy enough to learn, once you unlock the specials.

As you advance through the game, you’ll level up and increase your stats to make your character more capable of combat, much like an RPG. This was actually misleading according to most people who honestly expected a fighting game.

Like most RPG/MMO hybrid games, your ability to succeed at story missions basically comes down to your level rather than your skill. This is not to say a Dragon Ball RPG is a bad thing, it’s just someone else has done it before and better too. 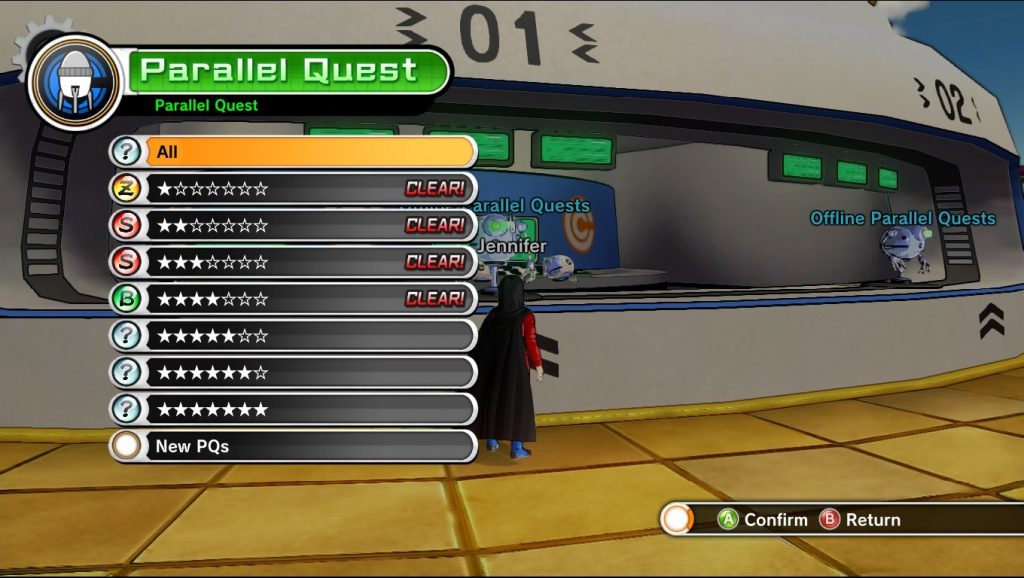 The issue is that DB Xenoverse resembles a fighting game, but leveling up is really the best way to win, rather than using good reflexes or skills. You must take on missions called parallel quests in which you are sent into an area against fighters and given objectives to accomplish.

By doing these missions with friends or AI-controlled characters, you can unlock clothing, special attacks, possibly other items used in the other districts to collect, sell, or mix together into new items. The detail bits tend to get overwhelming later on. 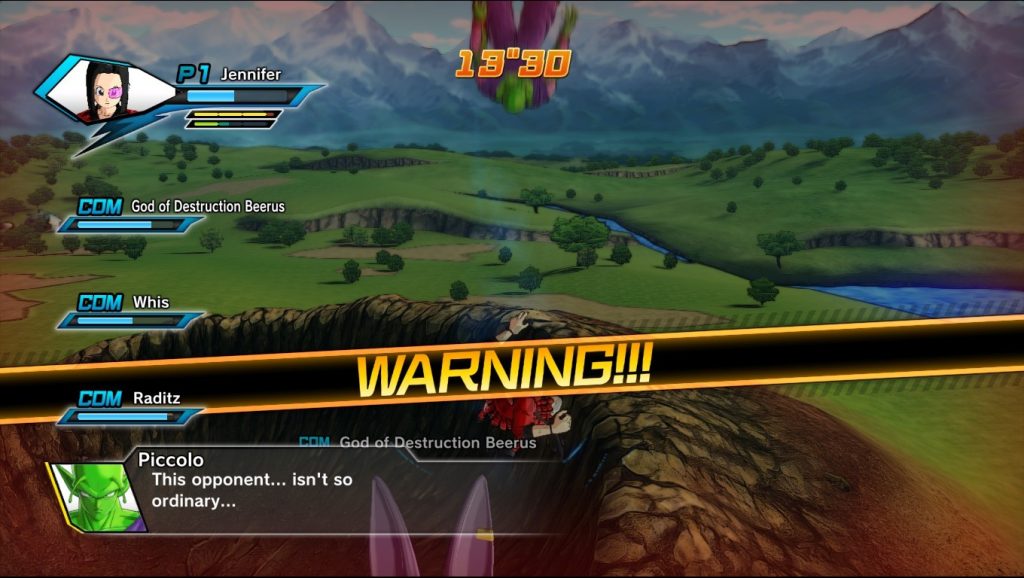 Each mission has certain items pertaining to them, but there are two unlockable events for each mission. Finishing/Ultimate finishing a mission, the latter is the only way to acquire certain items. Not only is an ultimate mission a harder task tacked onto the end, but it’s also difficult to trigger via doing extra denoted missions or unlocking them by pure chance alone.

That’s not all, after finishing the mission there is still a chance that you will not get the item you want since the items promised to you are also rewarded at random. It’s determined by multiple coin-flips at this point, how frustrating. 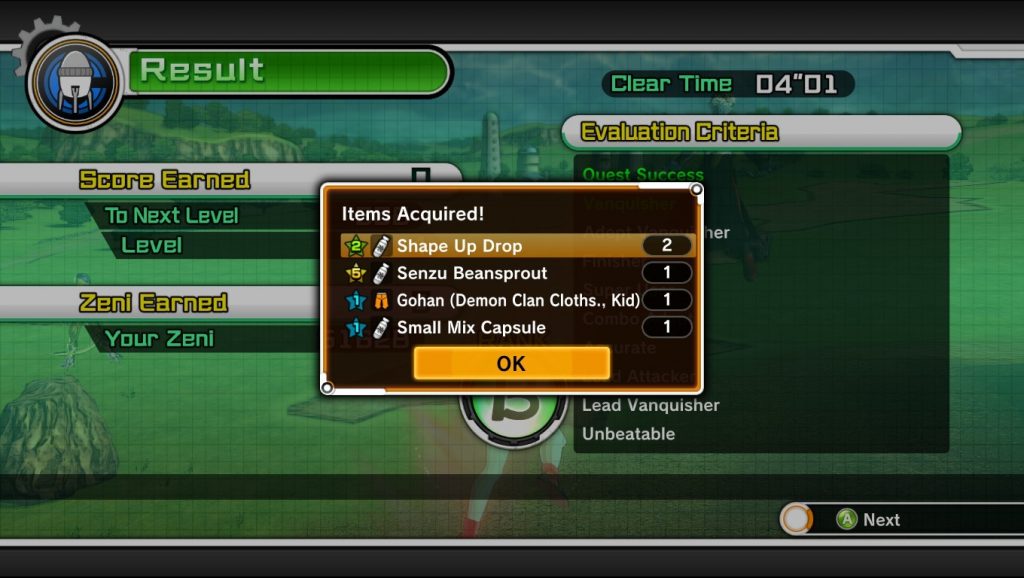 In post-game phase, you can gain the favor of the Elder Kai to make this process easier. Too bad he doesn’t let you skip it in the first place. But enough about that, let’s go over what you will do with these item drops and equips. 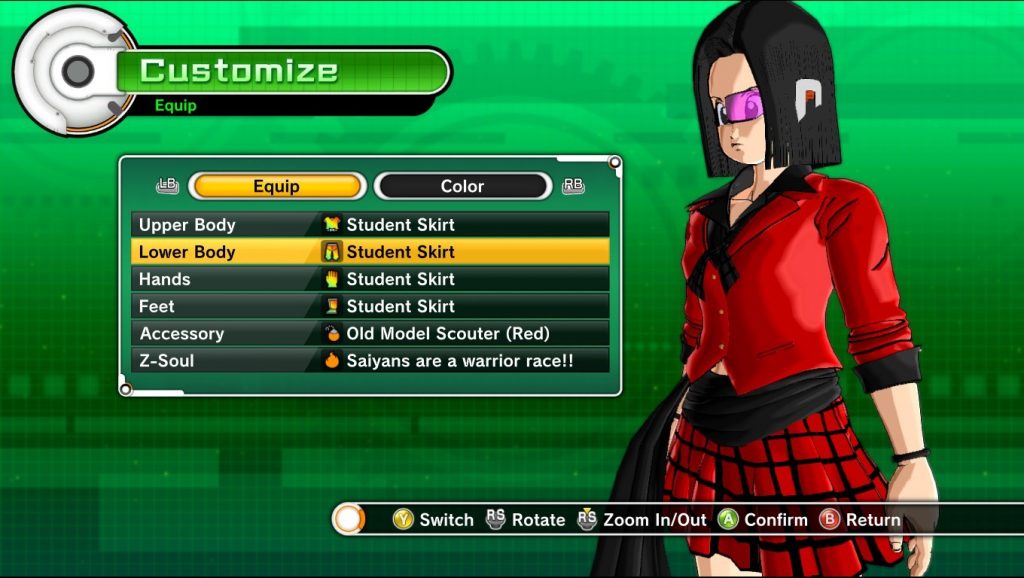 There is a wide selection of clothing for you to choose for your character. However, the way that your character looks will affect your stats in combat. Because of this, if you want to be incredibly strong, you will need to scrap that sailor costume and instead, replace it with an unfitting copy of Vegeta’s movie outfit. 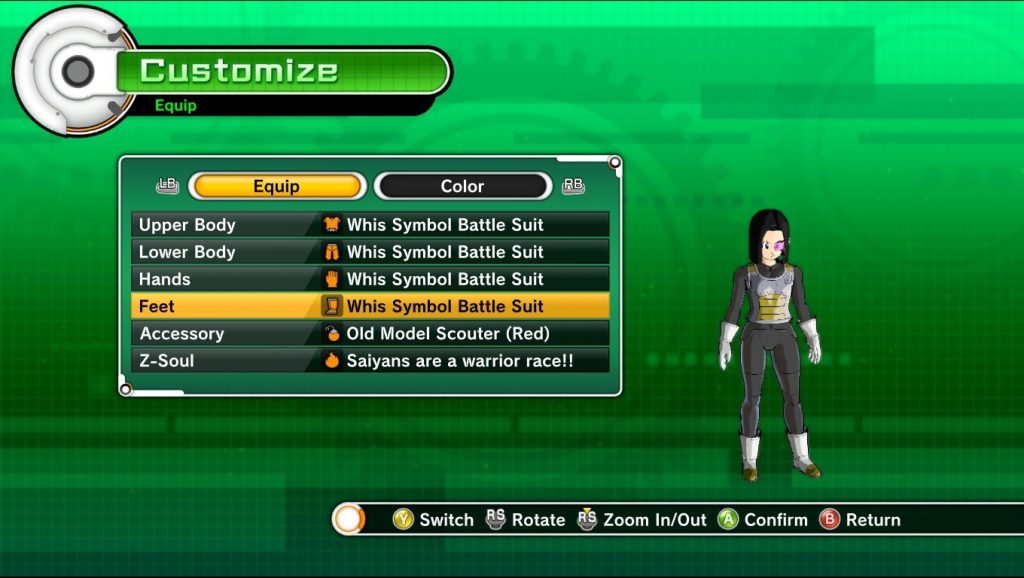 On top of that, your outfits are limited by your race and sex: Men can’t wear women’s clothes and vice versa, so if you are an alien race other than Saiyan, then you can’t wear any of the appealing outfits. This makes no sense to me, except for the male Majins.

Characters also have the choice of equipping small accessories such as hats and scouters, and an item called a Z-Soul, which is a passive ability that activates when certain conditions are met in combat, say when you lose too much health or use certain moves. 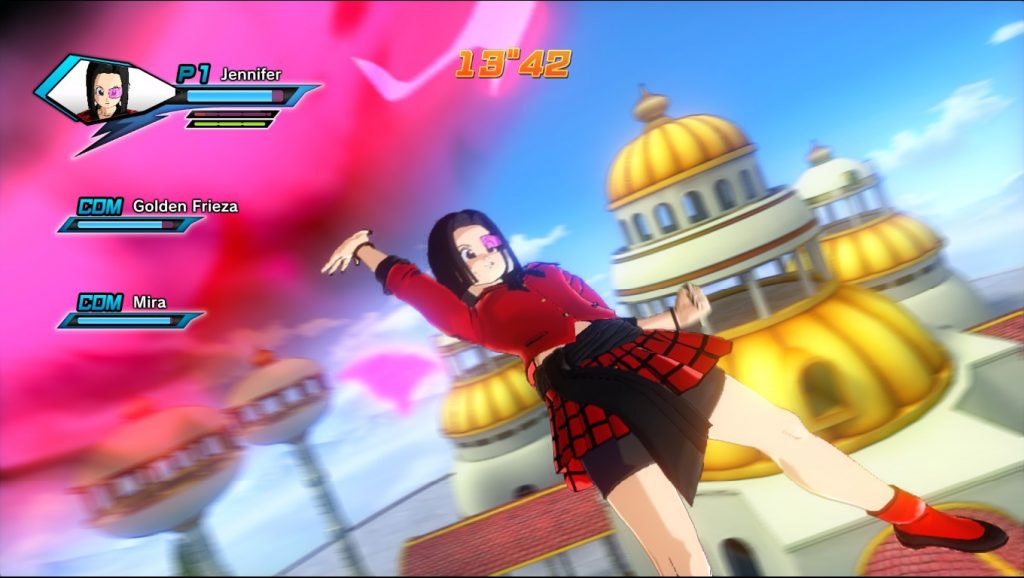 Speaking of using moves, I’ll explain how you can customize those. You are allowed to pick eight moves to use in combat, four normal, and four super. It is really cool to customize what kind of fighter you want to be, but there is one annoying strategy, that I think the testers overlooked and never bothered to fix known as Saiyan Spamming.

In the game, any Saiyan has the ability to go Super Saiyan which slowly drains your character’s energy, in return, negating the cost of using attacks. Because of this, high-cost Ki moves like the Super Kamehameha and the Final Flash cost practically nothing.

My Problem with Dragon Ball Xenoverse

The end result is people only playing as a Saiyan, putting all the points they have into their maximum Ki limit, becoming a Super Saiyan, and endlessly using the strongest moves in the game to completely demolish anything that gets in the line of fire.

This issue was never addressed or fixed. Sure you can wait out a Saiyan spammer with enough coordination and patience, but this is still an inexcusable thing to put into a game in terms of balancing different races and their special powers.

The concept is good in terms of DB, the idea of making a personal character in such a legendary series is attractive. But, the ideas they had were executed in a broken manner that was soon replaced by its sequel for a perfectly good reason.